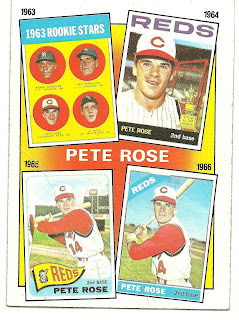 Card fact: Pete Rose played so long, that this is the first of 6 cards like this.

Card thoughts: Pete Rose sure looks boyish in these pictures and he doesn't have a crappy haircut yet. The 1964 card design was recycled by Topps for the design of the 1986 Topps set and the 1966 card is similar to the 1988 set. I really like these old Reds uniforms, with the vest/undershirt combo. My favorite card shown would have to be the 1965 one. It looks like Rose is being blown over by a strong wind! 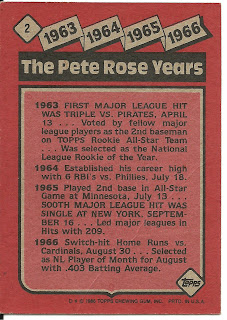 Rear guard: Rose already had 500 hits by his 3rd year in baseball. Pretty impressive! The other feats at this time are interesting, especially the switch hitting of home runs--Rose only hit 16 homers that year. One interesting thing about these statistics: The Topps "years" represent the season previous represented i.e. the 1964 card shows Pete Rose in the 1963 season. So the stats shown on the back here are actually one year off.
Posted by Jets Break Jaws at 9:10 PM

If you squint hard enough, he's so boyish in the 1964 card that he looks like Potsie. My favorite thing about some of the old Topps sets (1963-1976 or so) was the lettering. It was always somewhat cartoonish, with odd-almost-surreal flourishes to the serifs. And these were the days before big font-banks, so they no doubt had an artist visualize and design by hand all the letters for every card. Not that a lot of artists don't do that, but it's an exceptionally impressive feat for something that needs to be small, so full of letters and so reproducible.

how much is this card worth