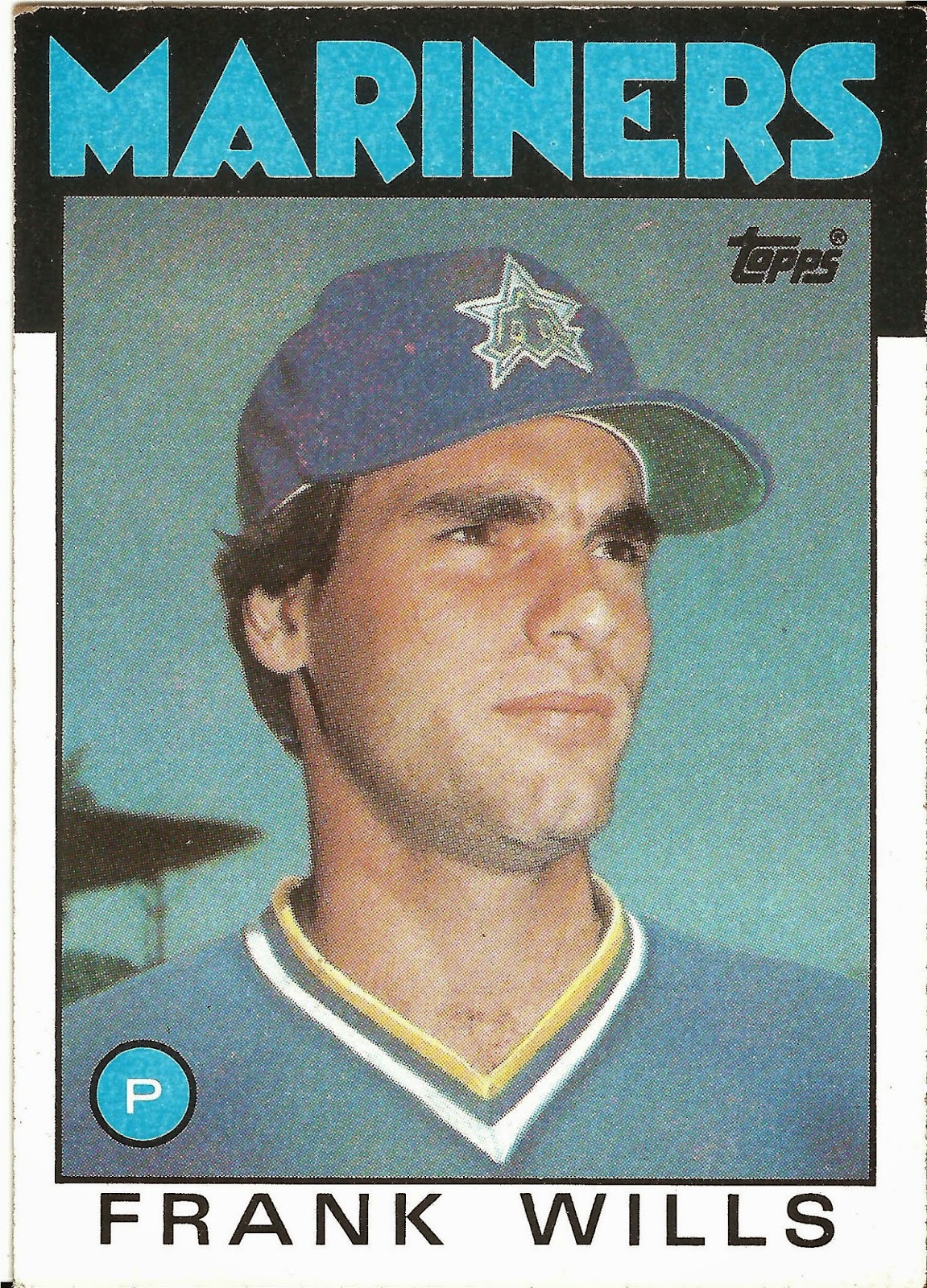 Card thoughts: The photo in the dusk. The five-a-clock shadow. The lowering, thick black eyebrows. The man looks like a mechanic. It is worth noting that this does not look like any of the other card photos of Wills, where he sports a mustache and is considerably less beady-eyed and swarthy.

Perhaps this odd photo can be attributed to the fact that Willis is obviously airbrushed into a Mariners uniform, as he spent spring training with the Mets in 1985.

The player: Not to be confused with the security guard who discovered the Watergate break-in, Wills was emblematic of the awful starting pitching the Mariners had had pretty much from their inception. A talented star in both baseball and football at Tulane University, he led the team to their first ever NCAA title, and was the punter on the football team that went to the Liberty Bowl (1979).

Wills was drafted in the first round by the Royals in 1980, but his college success did not translate to pro ball. As a starter in the minors, Willis struggled with his control, and eventually was moved to a swingman role in AAA, a spot usually reserved for “organization” men. But he was a first round pick, and the Royals presumably wanted to prove he wasn’t a bust, so he was called up early in the 1983 season, when he started the year 5-2 at Jacksonville (Southern League).

In the majors, Wills averaged 6 innings per start, and pitched decently enough (2-1 with a 4.15 ERA overall, including 4 starts). But it was soon back to the minors for Wills, where he struggled once again at AAA. Another brief call up for 10 games in 1984 (half in relief, half starting) led to a 5.11 ERA, and a loss in confidence that their former first round pick would ever pan out.

In an insanely complicated four-team team between the Mets, Royals, Rangers, and Brewers, players were flying everywhere. The Royals eventually ended up with Jim Sundberg, and Wills made it to the Mets, where he was DFA’d after spring training and eventually sent to the Mariners for forgettable Midwest League pitcher Wray Bergendahl (another former first round pick).

With the Mariners being thin on pitching, Willis finally got a chance to prove himself, but he only proved the Royals were right in letting him go. A 5-11 record with a 6.00 ERA wasn’t going to cut it, even with the lowly Mariners. Released at the end of the season, he hooked on with the Indians, where he wound up as their closer during the end of the 1986 season (4 saves in 6 opportunities).

Willis would have his best seasons with the Blue Jays, with whom he spent four years, two of them as a serviceable middle reliever in 1989 and 1990.  He was not used in the 1989 post-season, however.

Apparently, Wills was working as a limousine driver when he died at age 53, after complaining about feeling ill a week earlier. Despite not being very successful in the majors, he remains a legend in New Orleans for both his high school and college exploits. 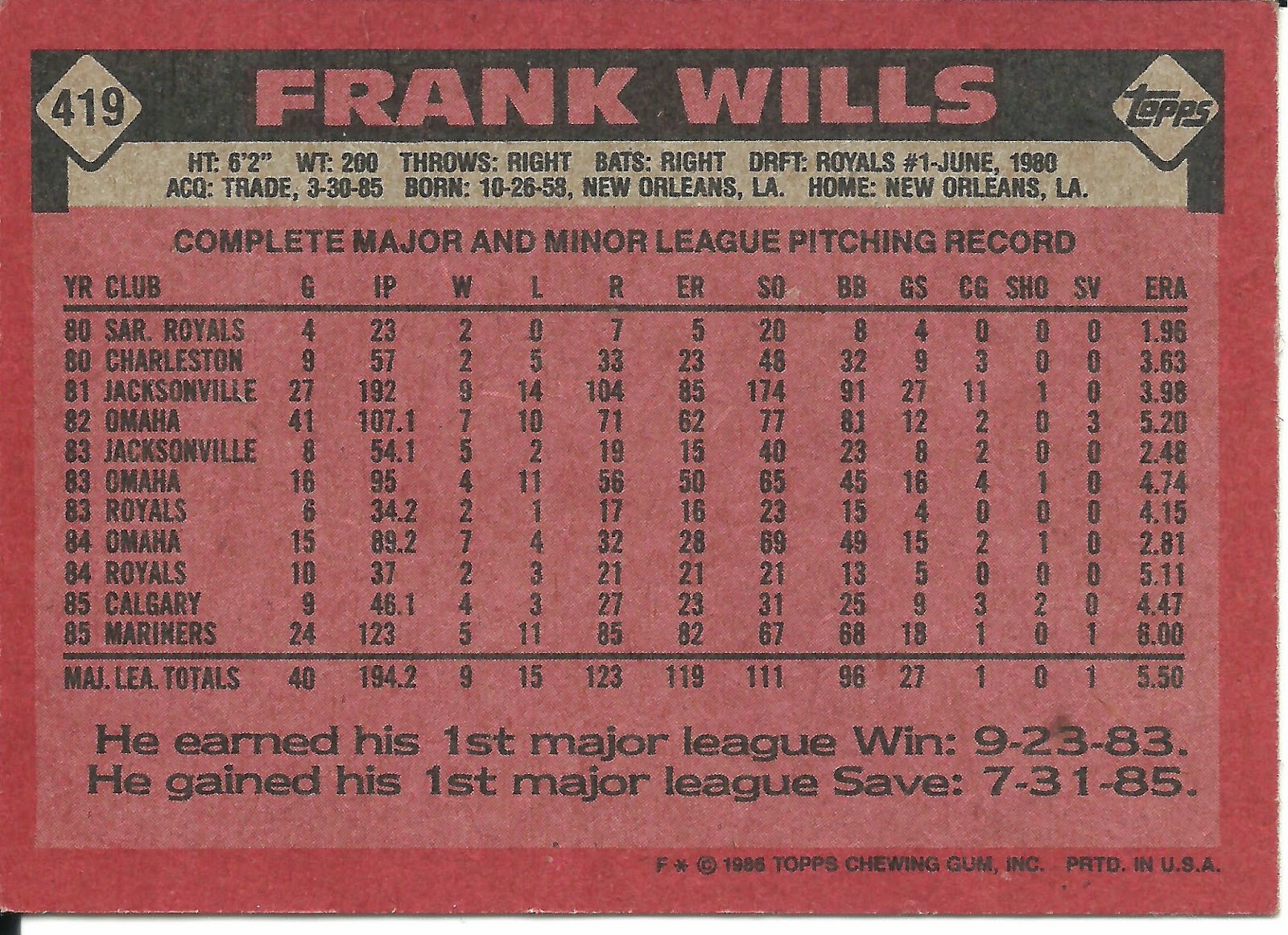 Rear guard: Wills first win was against the Twins and he was fairly effective, giving up just 1 run and striking out 3.