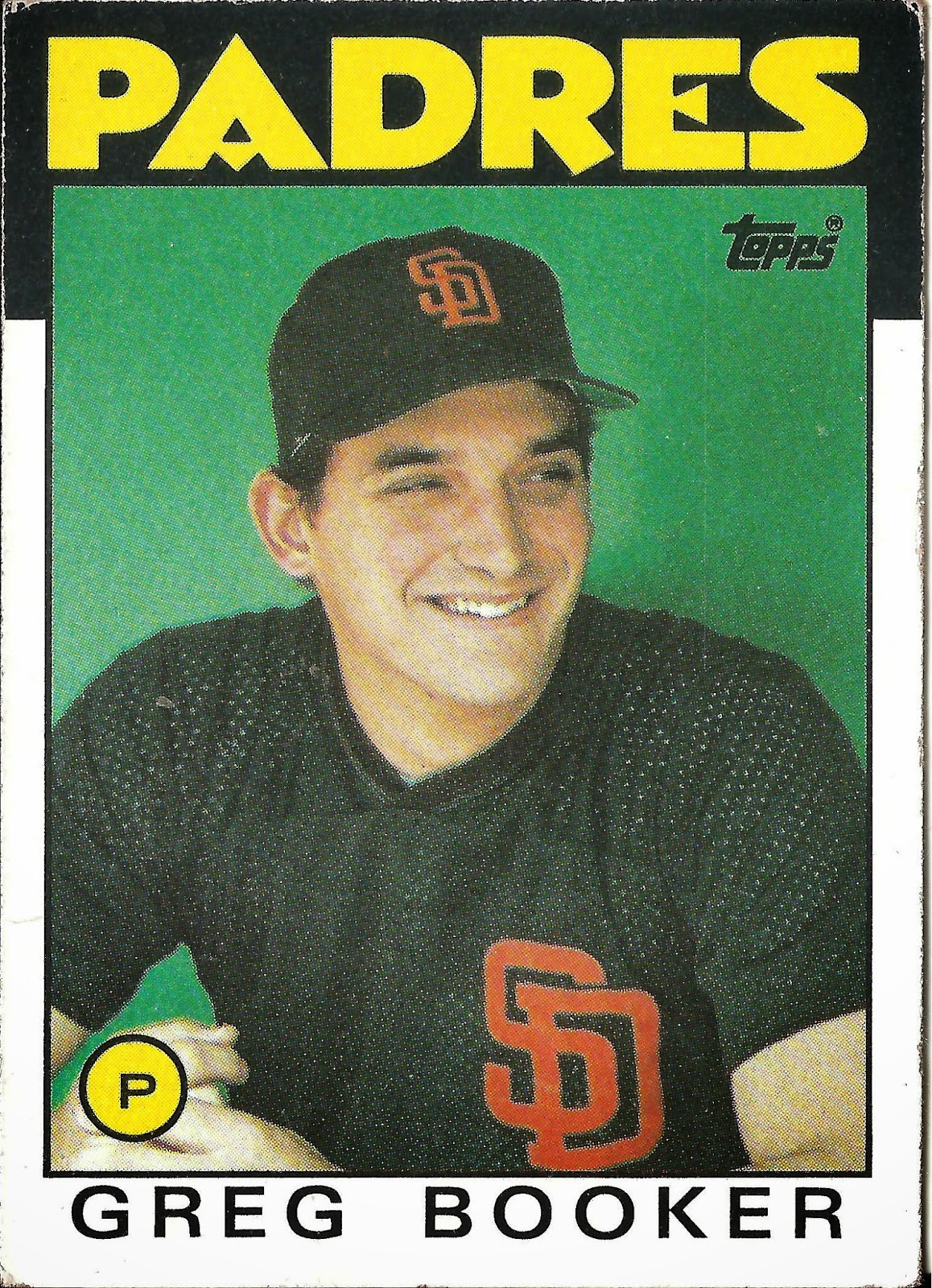 Card thoughts: Greg Booker looks really young in this picture, but on his earlier cards, he looks really old. Probably because he aced the mustache.

The player: Greg Booker was a man with a dynamite arm, but man did he have control issues. In 1982, while pitching at Class-A Reno, the guy walked an incredible 157 batters in 161 or so innings (against 87 strikeouts). That season would be Booker’s last full time as a starter, as he moved up the ladder steadily, despite ERAs that never went below 5, and walks galore. Somehow making the majors at age 23 (11 2/3 innings pitched, 9 walks), he was a stellar contributor to the Padres pennant run in 1984, keeping his ERA below 3 throughout July and August.

It was good enough for a roster spot in the postseason, where pitched fine against the Cubs, but then lost his control in Game 3 of the World Series, walking 4 in one inning.

Booker got a card in this set, perhaps because he pitched in the World Series, because he barely pitched at all in ’85 (22 1/3 innings pitched, and ugly 6.85 ERA). He finally righted the ship in 1987 (after an ’86 season mostly in the minors), and had a decent year as a middle reliever (while marrying his future boss’s daughter—Kristi McKeon).

But ironically, once his father-in-law, Jack McKeon, took over as manager (in addition to his GM duties) in 1988, he barely pitched. Booker was booed mercilessly, while he often went two weeks between relief appearances. While his ERA doesn’t seem all that bad (3.39), he had become the team goat. By the middle of the 1989 season, Booker was gone, traded to the Twins for Terrible Freddie Toliver. Invited to spring training by the Cubs in 1990, he was cut before the season began, and ended up pitching his last 2 games with the Giants that season.

Booker still works in baseball (as a scouts), after previously working for a long time as a pitching coach (including from 1997-2003 for the Padres). He has no hard feelings for his father-in-law: He lived next door to him for several years. 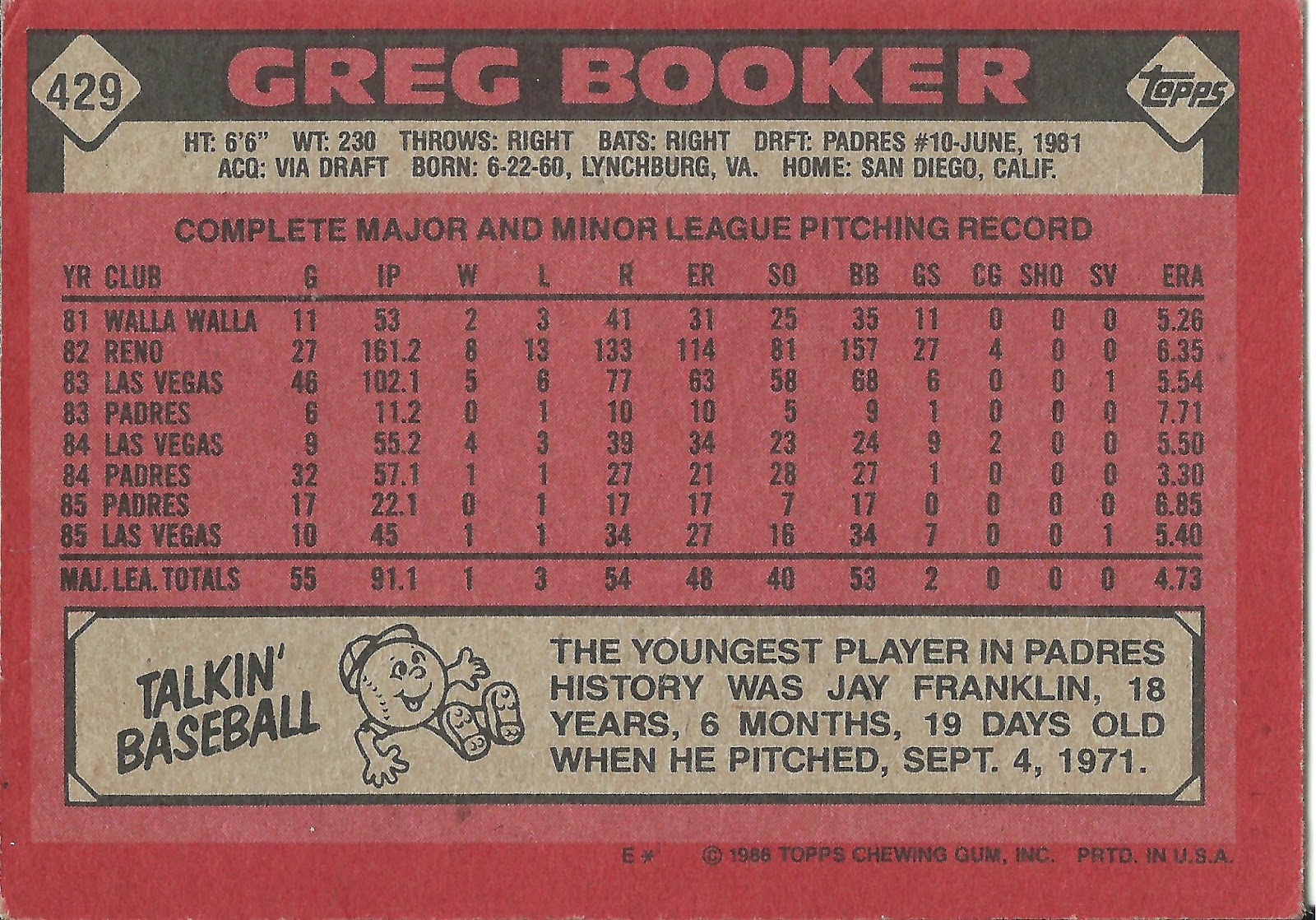 Rear guard: Back before pitching prospects were protected like rare jewels, it was common to see a 19-year phenom appear in the majors. Expansion teams especially had the propensity to rush first round draft picks to the majors in order to create some buzz. Little did Franklin know that he would never pitch again the majors after 1971. The poor guy couldn't buy a ticket out of Alexandria (Texas League) for three years, and he missed the entire 1972 season after injuring his elbow. Even sadder, after never making it back to the pros, Franklin's wife left him, his father committed suicide, and he suffered from paranoid schizophrenia. His mental illness caused him to overeat and chain smoke. He blames baseball for his problems. Franklin currently resides in a group home.
Posted by Jets Break Jaws at 9:35 PM 13 comments: 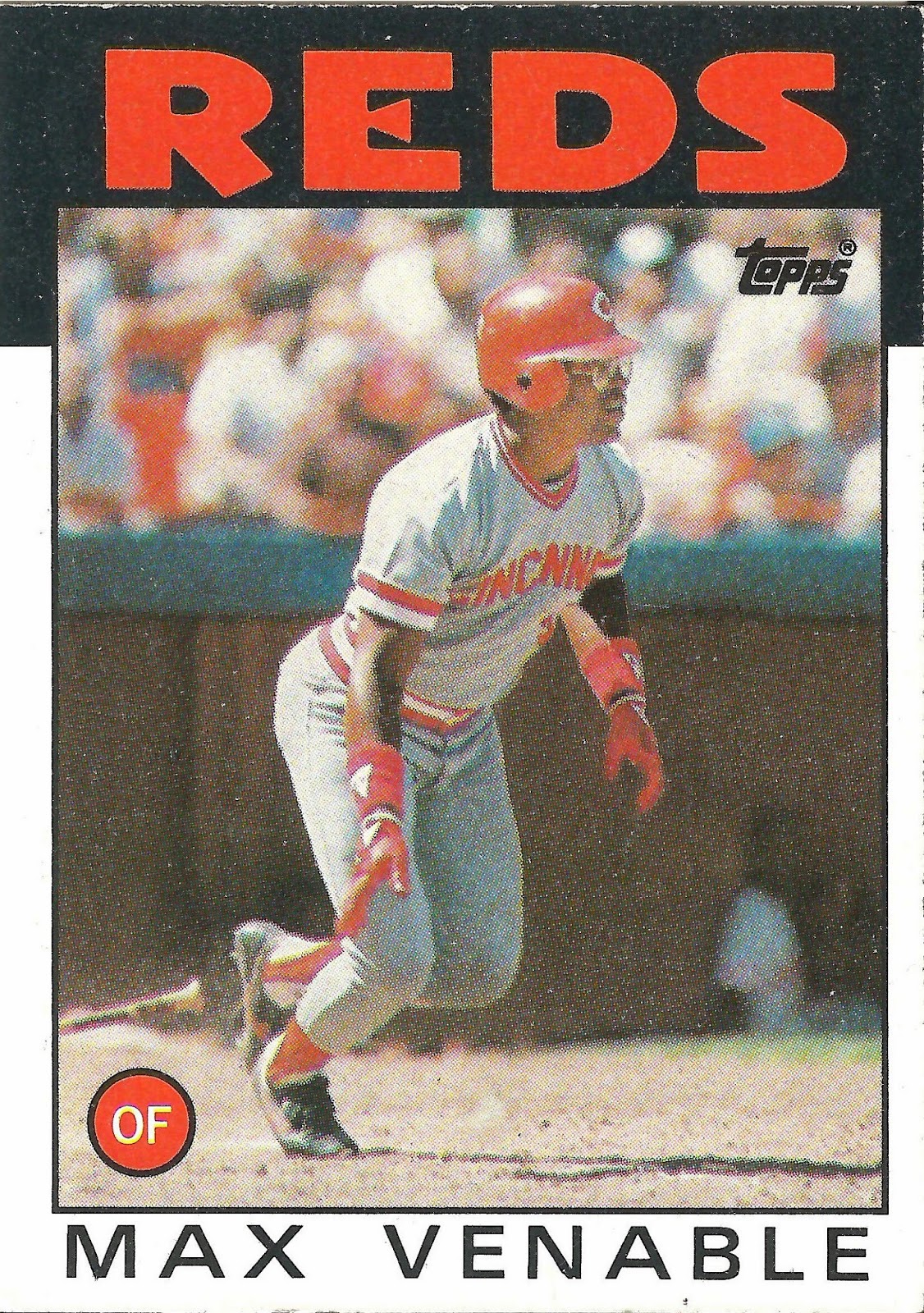 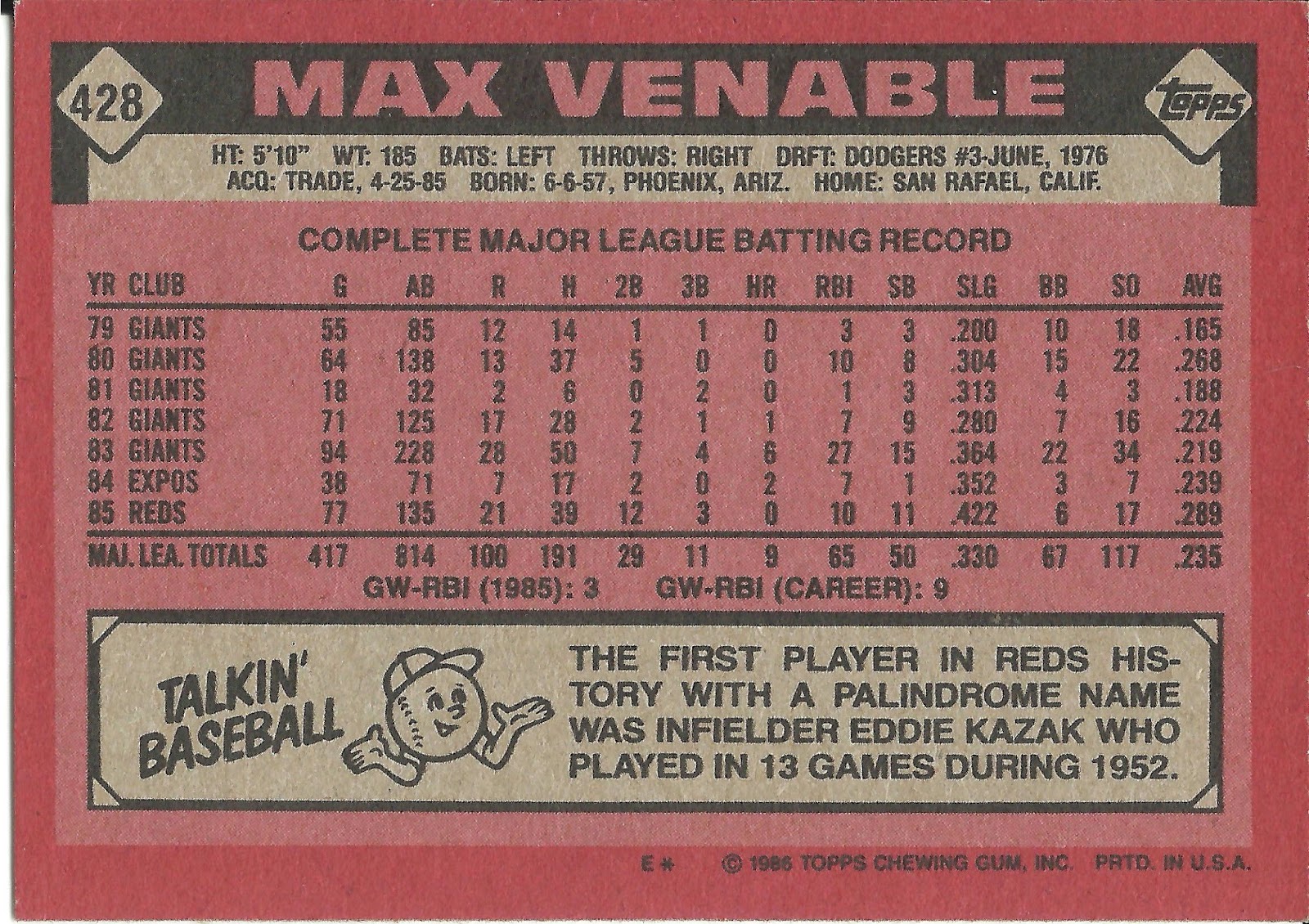 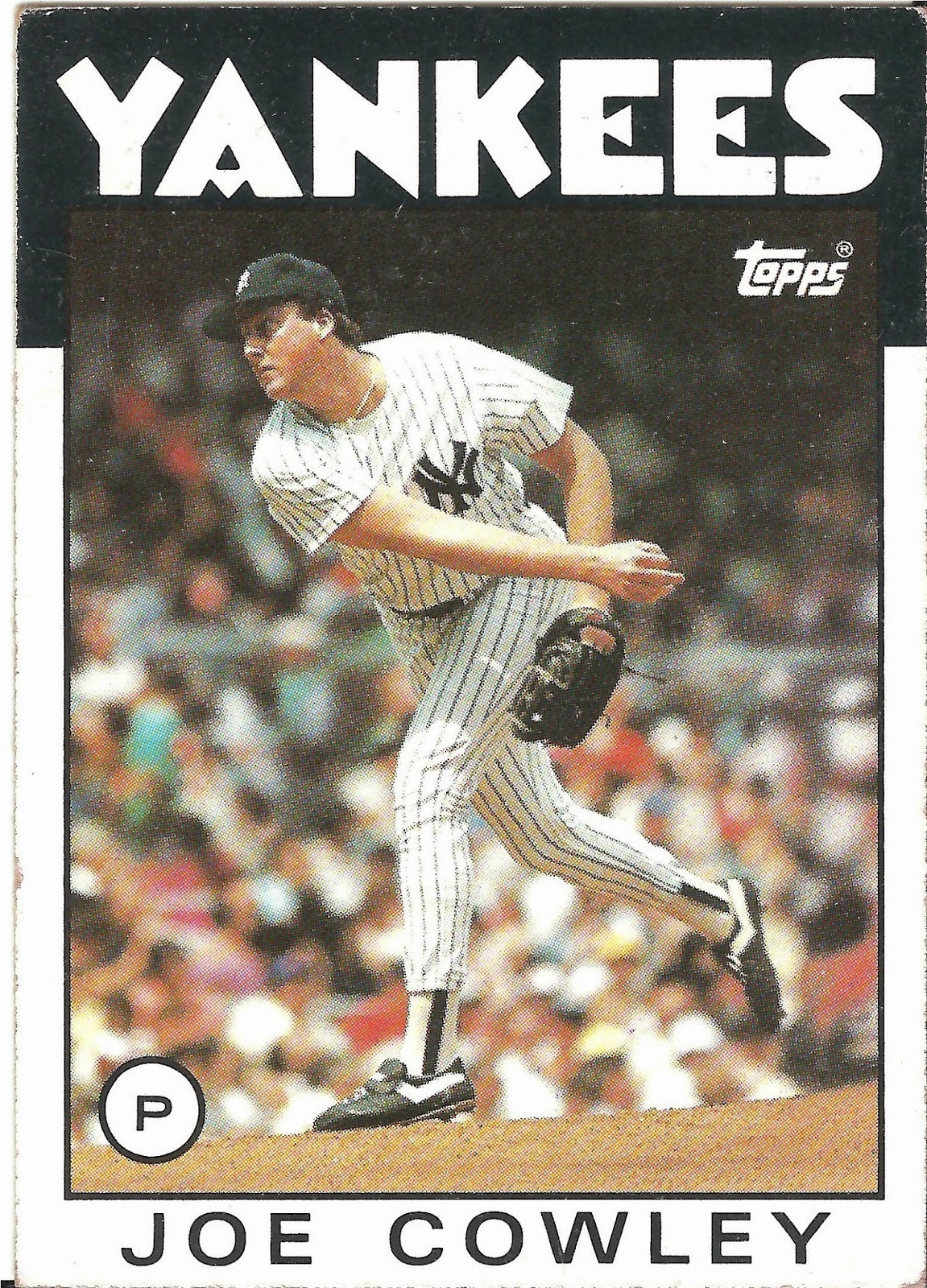 Card thoughts: I thought this Joe Cowley was this jerky Sun-times columnist, but apparently I was wrong.

The player: Cowley spent 9 years in the Braves system, but never pitched much with them in the majors—which is telling, because from 1981-1984 (when Cowley was at AAA), their major league pitching staff was no great shakes.

After essentially being released by the Braves in 1983, Cowley was picked up by the Yankees as AAA insurance for their starters. But the Yankees only had Ron Guidry and Phil Neikro as regular starters that year, and Cowley was rotated into the rotation in July. He performed surprisingly well, going 9-2 with a 3.68 ERA.

Cowley was even better in the season shown on this card. With a 12-6 record, with winning percentage was in the top ten in the league. He was helped by the Yankees high power offense, however, as his peripherals that season were pretty bad: 85 walks to 97 strikeouts, and 29 home runs given up in just over 159 innings. Cowley couldn’t even field well.

Realizing they had lightning in the bottle, the Yankees made a rare wise trade (for the time), and sent Cowley to the White Sox for Britt Burns and a few minor leaguers. With the Sox, he continued to walk tons of guys, although his strikeouts were up a tad. His 11-11 record wasn’t so great, however, although some of that can be attributed to the poor White Sox offense backing him up.

But notably, Cowley threw one of the more improbable no-hitters in major league history. You usually think of no-hitters as a crisp, well-thrown game. This was decidedly not. Cowley was in trouble all game, and at one point walked three batters in a row (with no outs). However, he got out of it by just giving up a sacrifice fly. Those three walks were out of seven on the day, and he won the game 7-1.

Cowley would never win another major league game. He went 0-2 the rest of the season, and then gave up 17 hits and 21 walks in just 11 2/3 innings with the Phillies in 1987 (he only made it past the fifth inning in one of those four starts. He gave up 7, 5, 5 and 6 runs in those starts. ). So Cowley is the last pitcher to have his last win be a no-hitter. 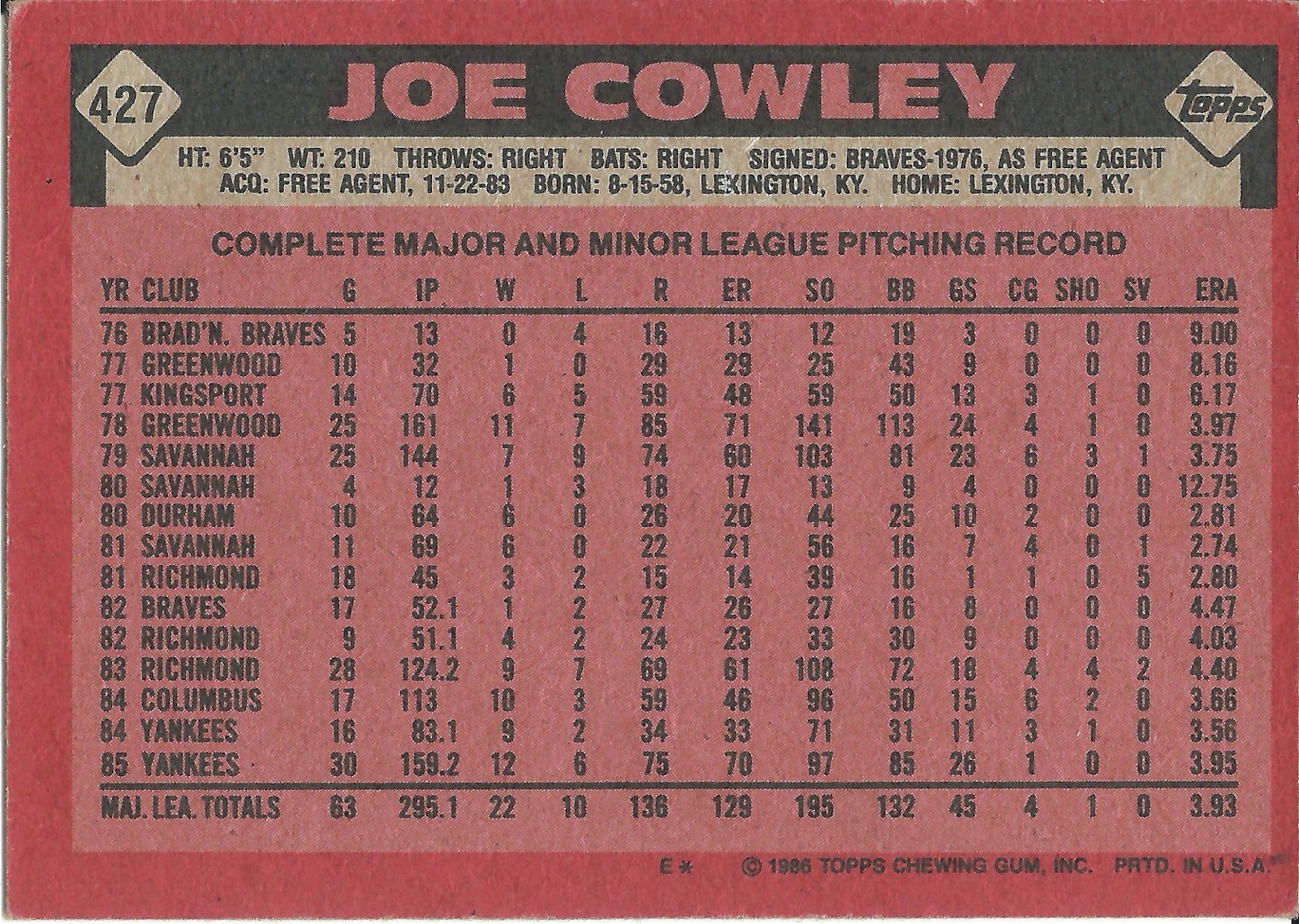 Rear guard: You might think Cowley was a veteran by looking at this card back, but no. Those are almost all minor league teams. Topps standard back then was if a player had less than 3 years experience, they showed the minor league record. If you squint hard, you can see he played with the Braves (tucked away in there in 1982).

As a kid, though, all those unknown towns were exciting. Cowley’s best minor league year as a starter was with in 1978, where he went 11-7. was part of the now defunct Western Carolinas League (which changed its name in 1979 to the South Atlantic League). had been a Braves affiliate since 1969, but didn’t survive the initial transition to the South Atlantic League (they later had three years as a Pirates affiliate).
Posted by Jets Break Jaws at 11:20 AM 2 comments:

Email ThisBlogThis!Share to TwitterShare to FacebookShare to Pinterest
Labels: Yankees
Older Posts Home
Subscribe to: Posts (Atom)
This blog is dedicated to the first Topps set I completed solely by trades. It is the 25th anniversary of the year I finally got a Don Mattingly card and breathed a triumphant sigh.