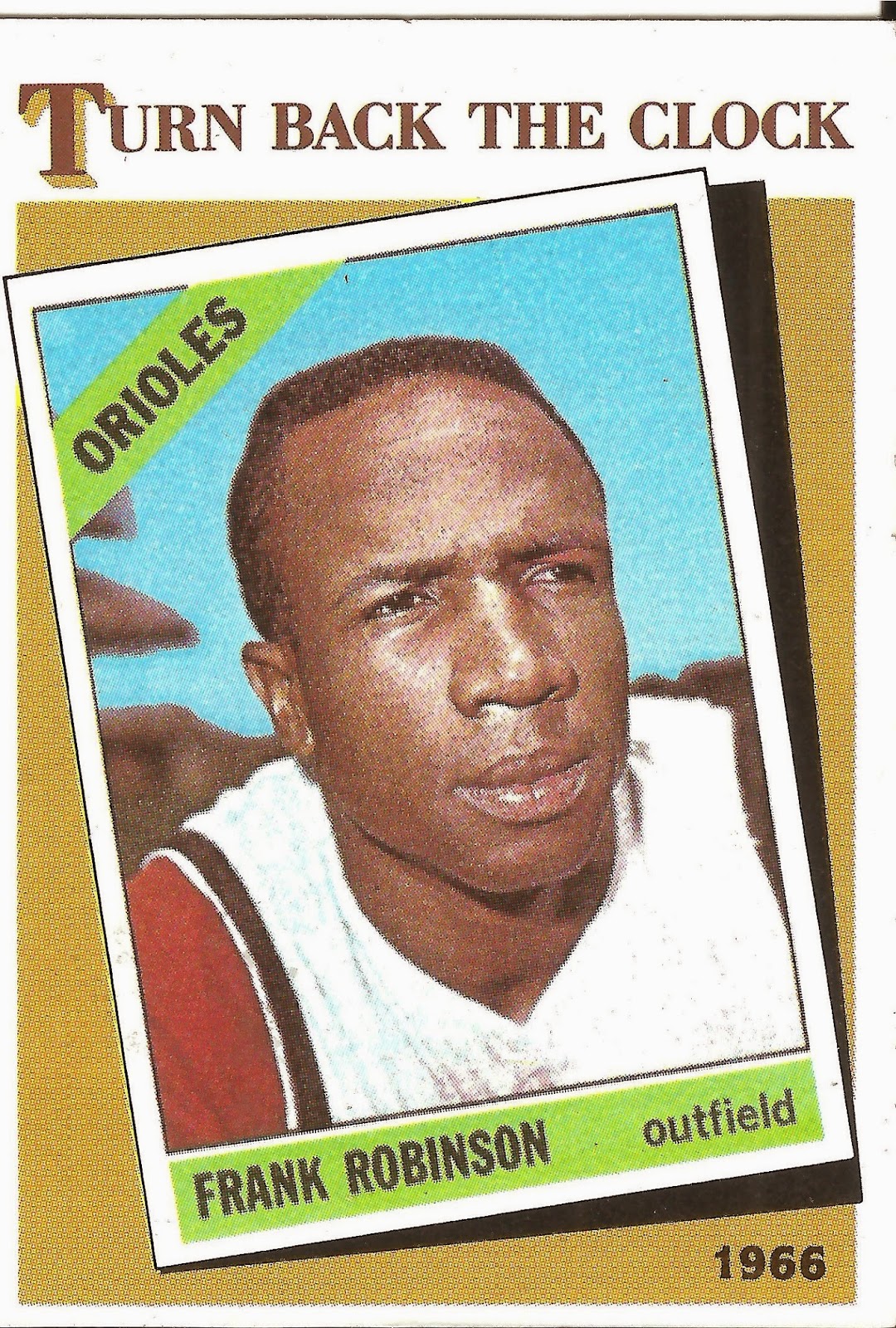 Card thoughts: Terrible airbrush job on Robinson. Obviously a Reds uniform. For once, Topps picked the right player, though. Robinson was the last player to win the Triple Crown before Miguel Cabrera did it a couple of years ago (corrected in the comments: That would be Yaz). 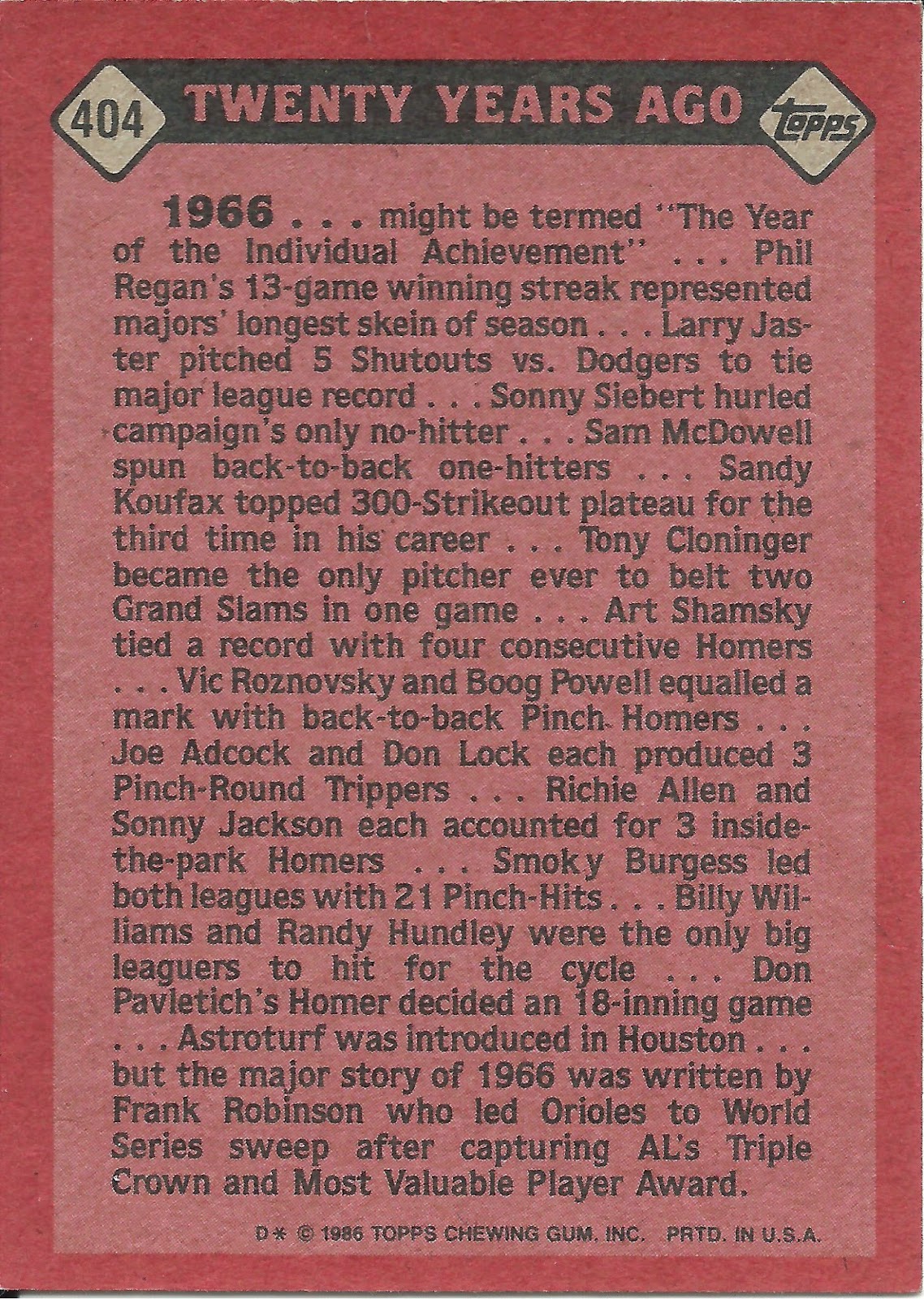 Email ThisBlogThis!Share to TwitterShare to FacebookShare to Pinterest
Labels: Orioles, Turn Back the Clock 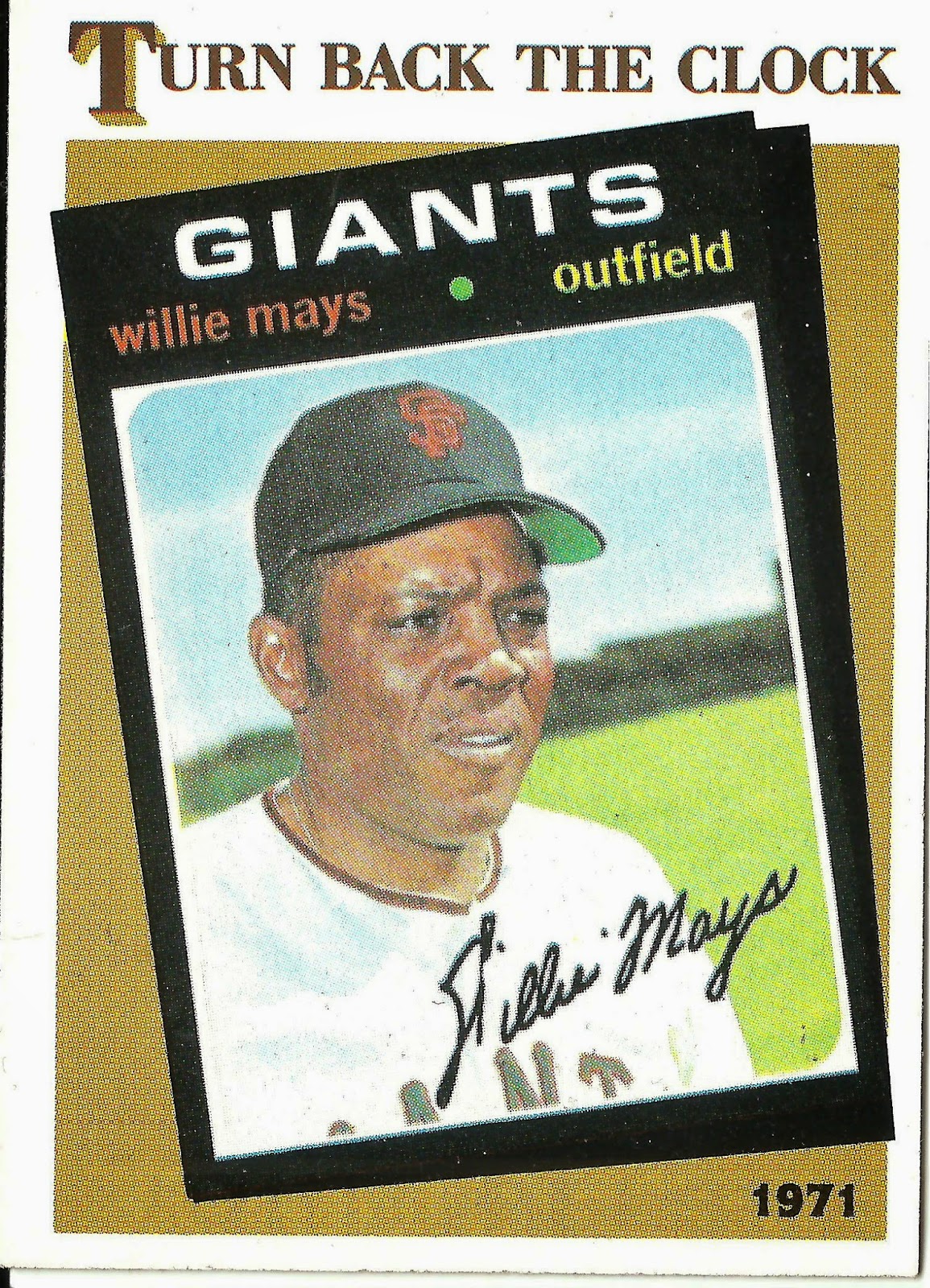 Card thoughts: Willie Mays is looking OLD. Of course, he was nearing 40 when this picture was taken. I would have put one of the four Orioles pitchers who won 20 games that year (probably Jim Palmer) on the front. 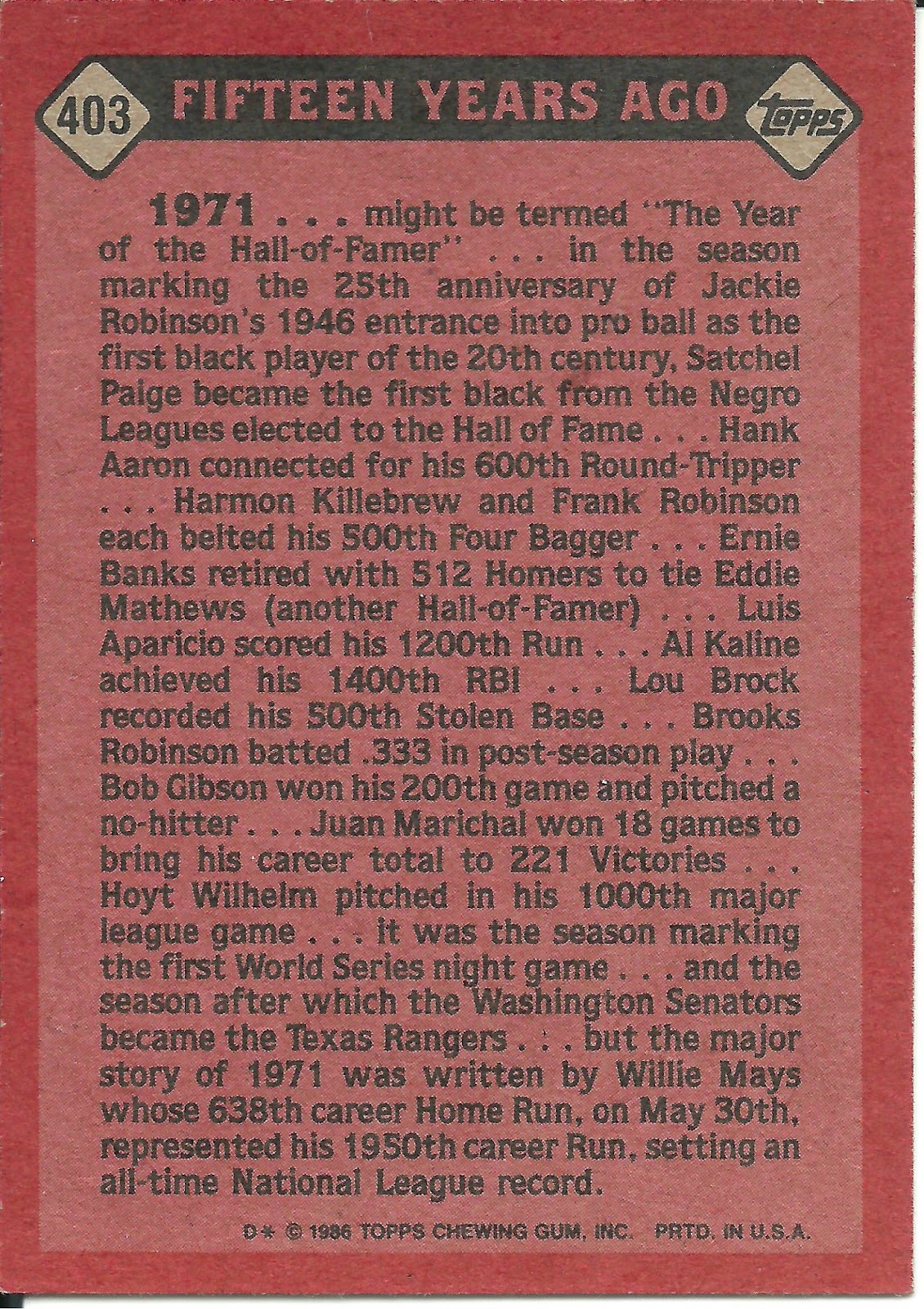 Rear guard: Well, every year is the year of the Hall of Famer. I did not know Luis Aparicio played that long. As for the other feats, it is strange that it took until 1971 for the World Series to be played at night; and the Senators, which were an expansion team in 1960 after the original franchise moved to Minnesota, failed again in Washington. It was a rickety franchise, changing owners several times and generally mired in last place before they moved to Texas. In their last game, the fans rioted, storming the field and stealing a bunch of souvenirs. The game was forfeited to the Yankees.
Posted by Jets Break Jaws at 9:19 AM No comments:

Email ThisBlogThis!Share to TwitterShare to FacebookShare to Pinterest
Labels: Giants, Turn Back the Clock 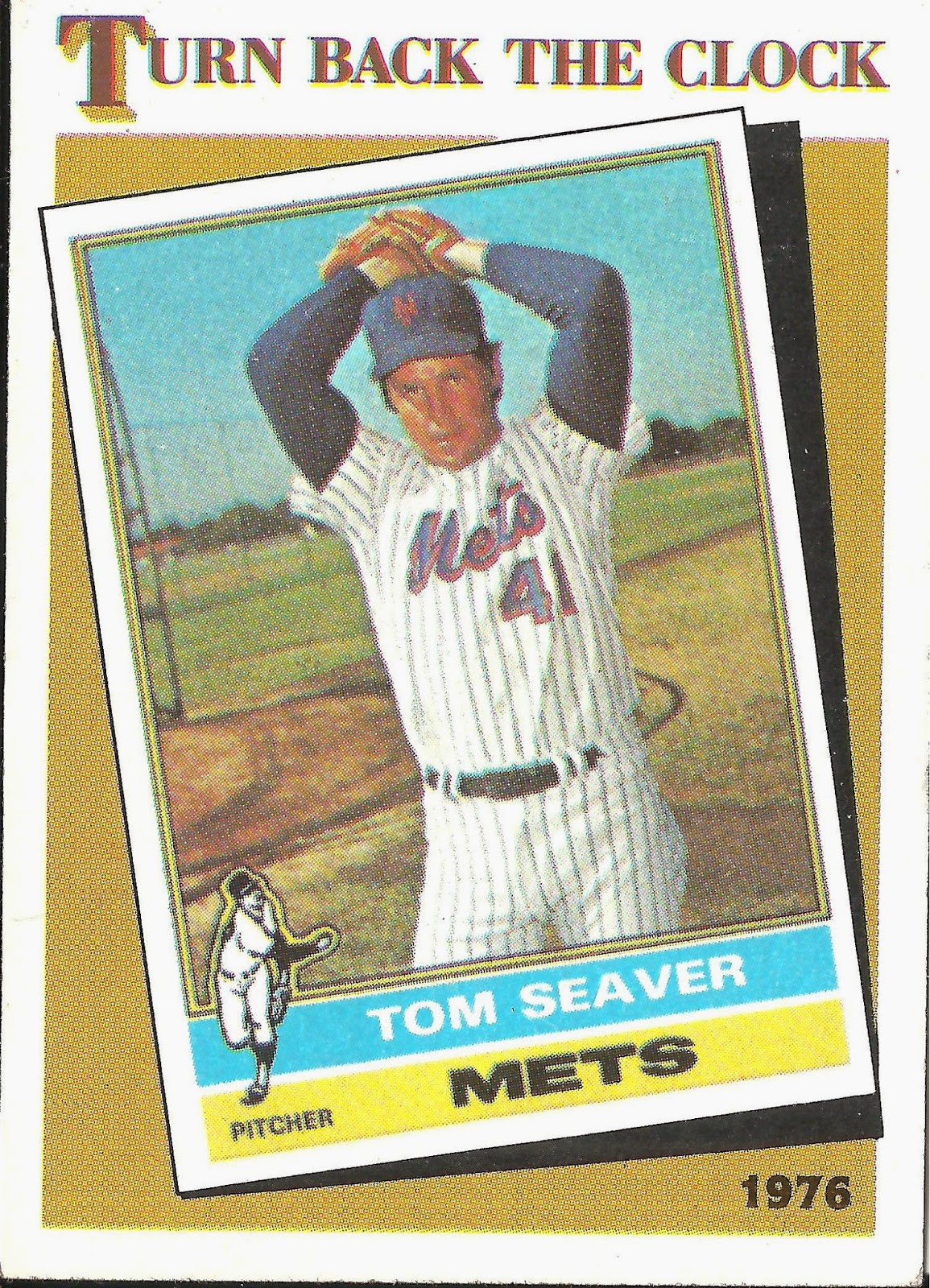 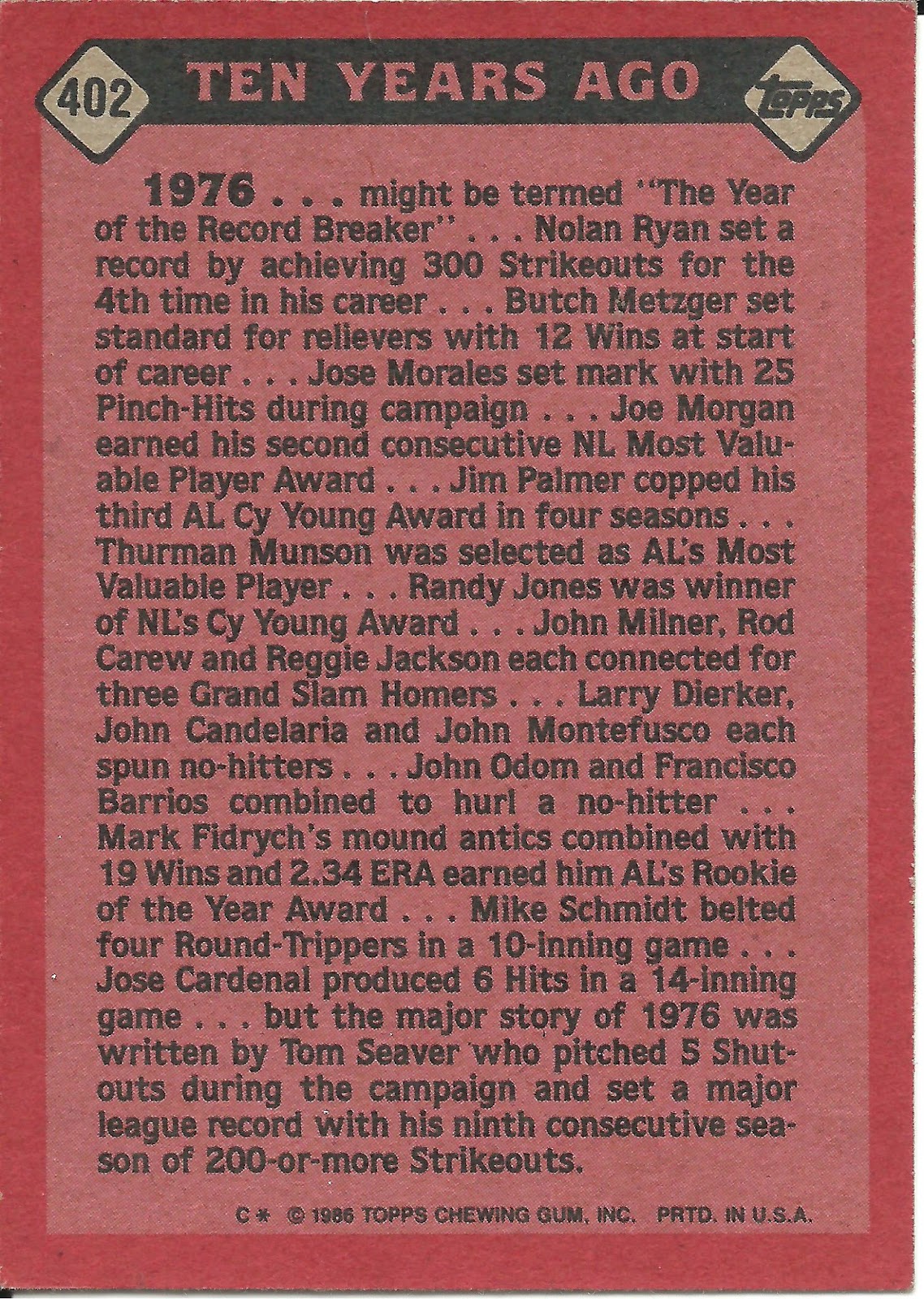 What was I doing in 1976? Crapping in my diapers on Bruner Street.
Posted by Jets Break Jaws at 10:53 PM No comments: 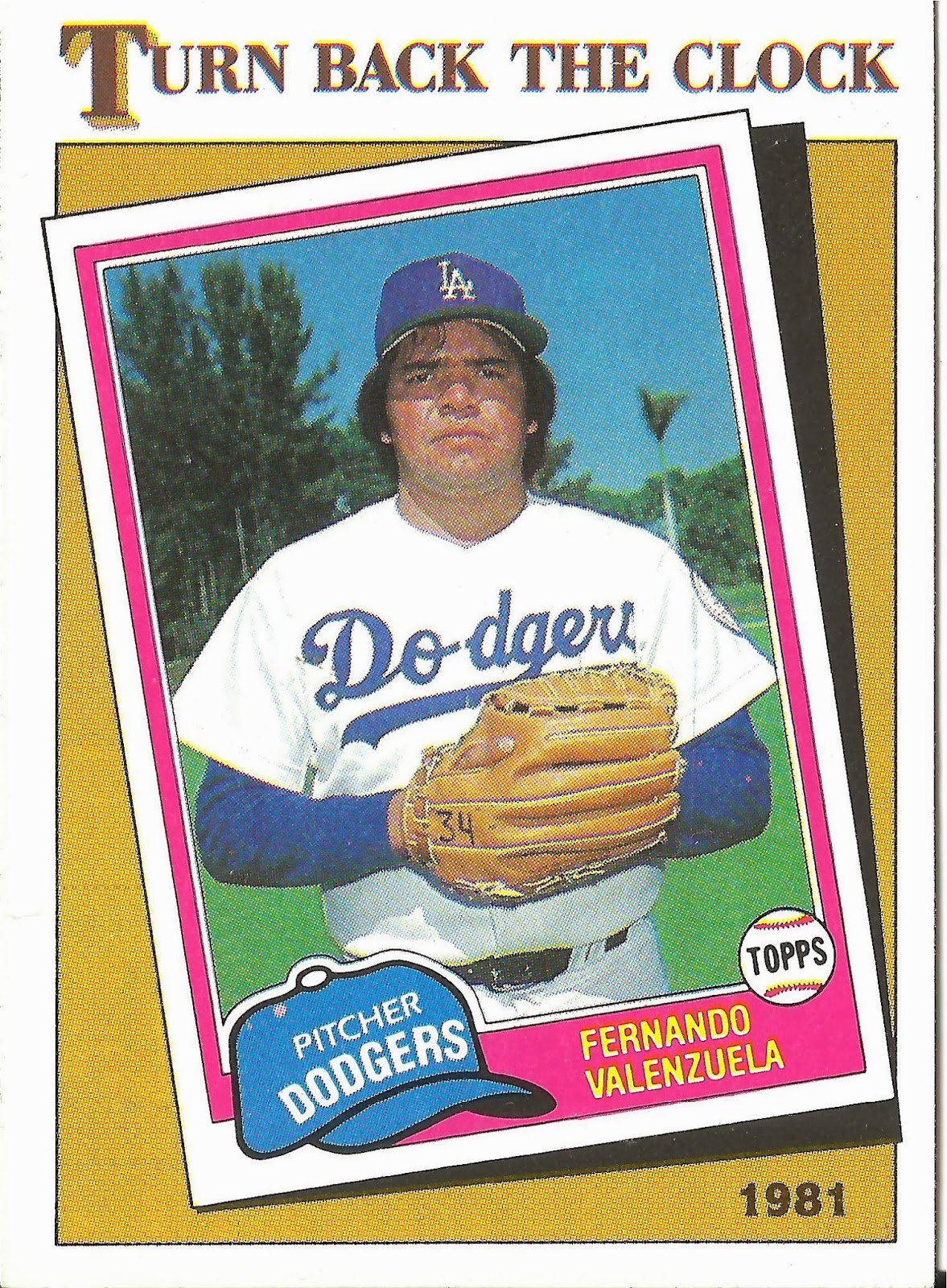 Card thoughts: Topps issued lots of Turn Back the Clock subsets in the late 80s and early 90s, possibly taking advantage of the fact they held some very historic copyrights. Topps always tried to compete with the other card sets on "tradition," hence these subsets.

As for the card: This card was never issued. Valenzuela's base card that year was a "Dodgers Rookies" card, that also included #146 Jack Perconte and Mike Scioscia. His traded card looks like this. This card is obviously from the same photo session, but why do this mock up instead of using the real card? 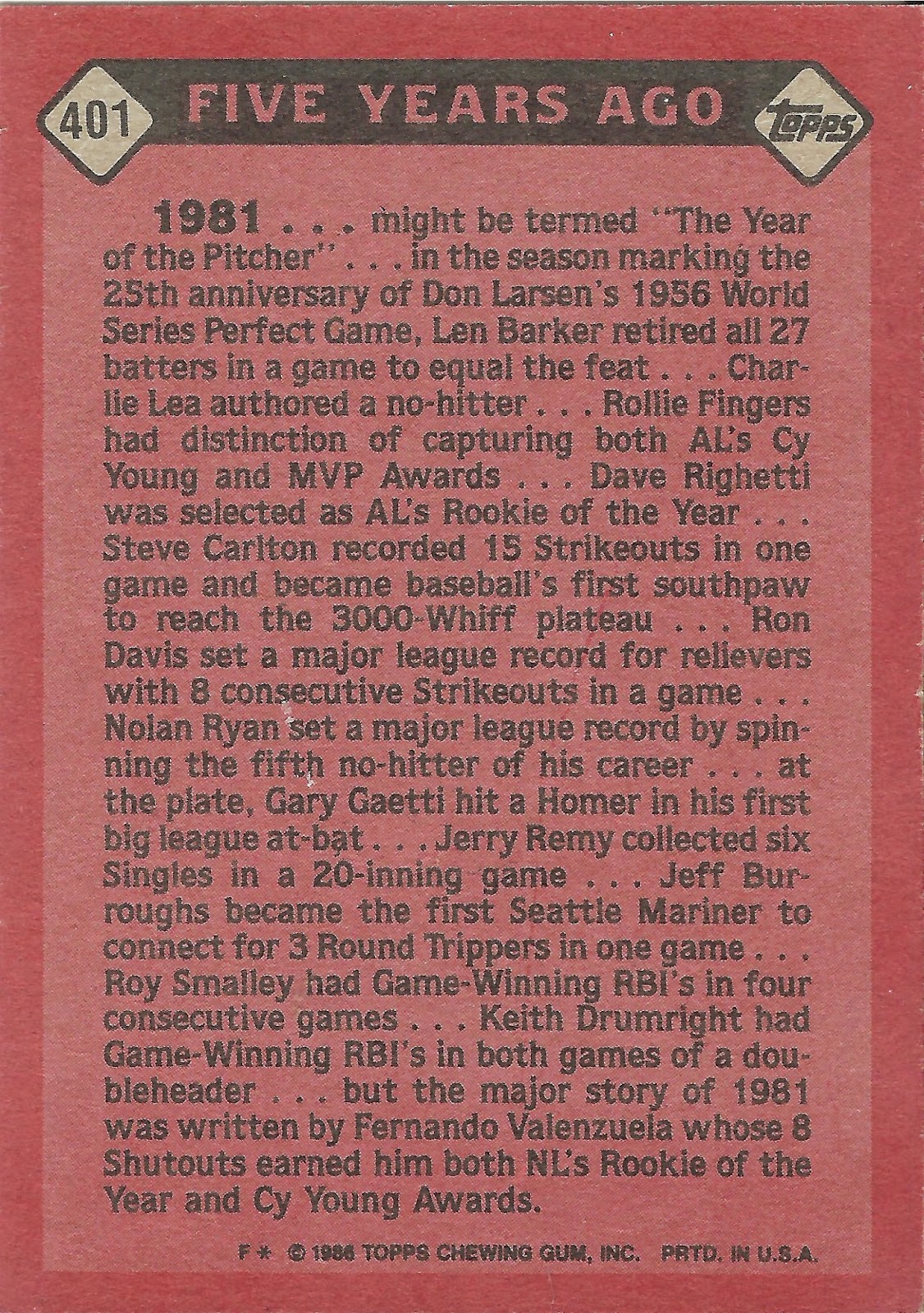 Rear guard: 1981 might be termed "The Year of the Strike." That year's strike, which occurred during the middle of the season (when offense is usually paramount), no doubt skewed the stats that year. Major League teams allowed an average of 4 runs per nine innings that year. In contract, the 2013 season, which was also considered a low offense season, 4.17 runs per 9 were allowed.

All the players mentioned on the back, with the exception of Keith Drumright and Jerry Remy, have cards in this set. Remy retired in 1984, and Drumright only had 141 career at bats (although he hit .291 in 1981).

Posted by Jets Break Jaws at 6:59 PM No comments:

Email ThisBlogThis!Share to TwitterShare to FacebookShare to Pinterest
Labels: Dodgers, Turn Back the Clock 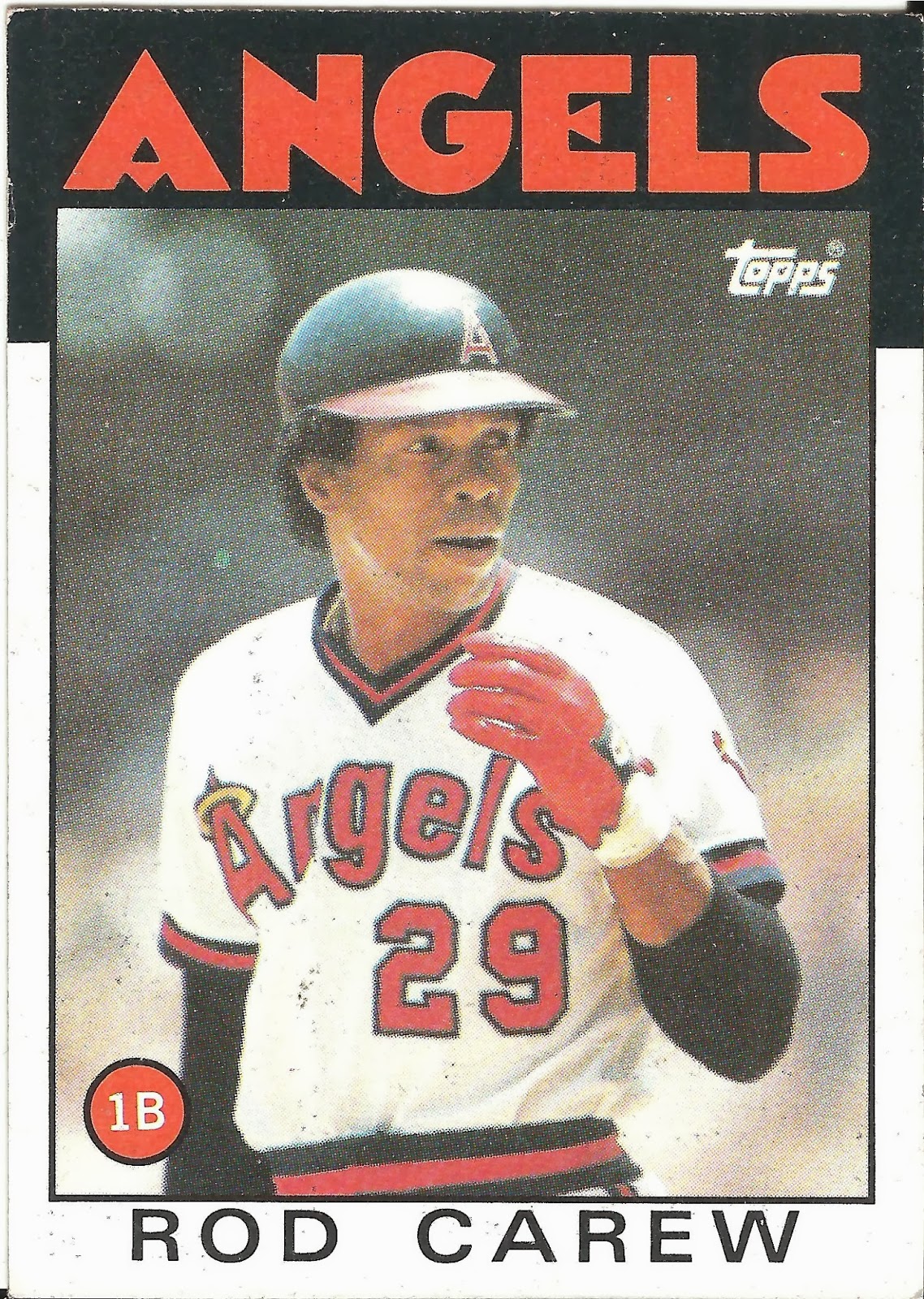 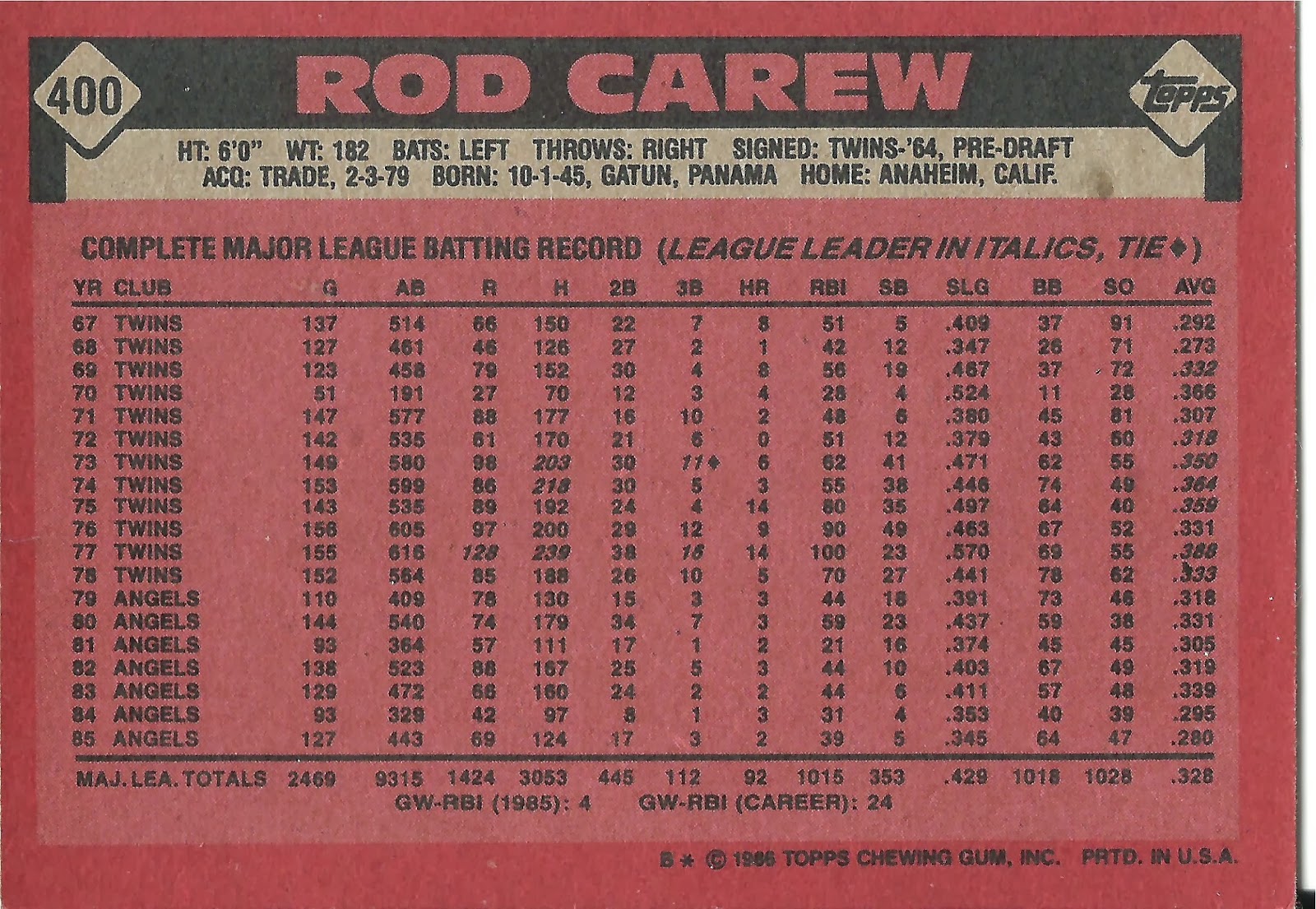 Rear guard: Those are Carew’s final numbers (if you can read them).
Posted by Jets Break Jaws at 10:12 PM No comments:

Email ThisBlogThis!Share to TwitterShare to FacebookShare to Pinterest
Labels: Angels
Newer Posts Older Posts Home
Subscribe to: Posts (Atom)
This blog is dedicated to the first Topps set I completed solely by trades. It is the 25th anniversary of the year I finally got a Don Mattingly card and breathed a triumphant sigh.