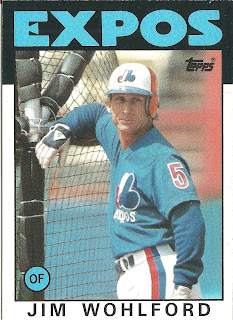 Card thoughts: The aging, leather-faced fifth outfielder/pinch hitter. A staple in this set (Although Wohlford looks run down on many of his 70s cards too).

The player: Tim McCarver once said that Jim Wohlford was too intense to be an everyday player. This was in 1983, which shows the McCarver’s “wisdom” is not new news.

The real reason that Wohlford wasn’t an everyday player was that he wasn’t very good. A beneficiary of the 1970s, when hitting above .250 with no power was considered good enough for a starting player, Wohlford  got his first big break with the Royals. As the primary left fielder in 1974, he played in 143 games and had career highs in just about every offensive category. In a telling statement of the times, he had a meager .343 slugging percentage in what is considered a power position. And Wohlford didn’t supplement that lack of power with speed, which would have been acceptable, given the times. Sure, he stole 16 bases bus he was caught 13 times.

Wohlford remained the starting left fielder in 1975, primarily because of his excellent defense, certainly not because of his offense (.255/.317/.312 was his triple slash line. Yes, his OPB outranked his slugging percentage). Eventually, a better hitter was installed in left, and Wohlford almost all of his remaining years as a reserve outfielder.

He did get another chance to start, however, when he was sent to the Brewers in 1976 with Jaime Quirk and Bob McClure in exchange for Darrell Porter and Jim Colborn. Both of the latter players would propel the Royals to a division win in 1977, while Wohlford was worse than replacement level in left. Once again, Wohlford struggled to put good wood on the ball, and he was still sent on suicide missions to second, despite the fact that it was obvious wasn’t a base stealer (17 steals, caught 16 times).

Wohlford became a more valuable player, once his playing time was limited. In 46 games the following season, he would hit .297, a career high (he also slugged over .400). Having found his niche, Wohlford settled in as a defensive backup in the outfield, interspersed with occasional pinch hitting duties. A highlight from this era in Wohlford’s career include driving in 5 runs against the Pirates late in 1984 while with the Expos, which improbably sent his confidence sky high, as he declared that he was a late bloomer. However, the rest of the league didn’t think so, and Wohlford would end his career 2 years later as an Expo backup left fielder. 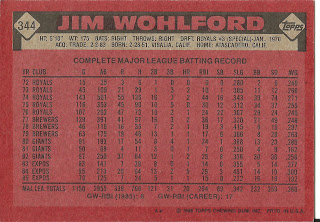 Rear guard: Yawn. I guess we can talk about Wohlford's 1985 season highlights. Of which there is one. On April 19, against the Cubs, he hit a pinch three run home run in the sixth inning to give the Expos a 5-3 lead they would not relinquish.
Posted by Jets Break Jaws at 8:10 PM

ah, very nice work! As a young baseball-obsessed Montrealer during the early-to-mid-80s, I was fascinated by Wohlford's "play me or trade me" saga after that confidence-boosting 1984 campaign.

This sad article, in particular, always stuck with me:
http://news.google.com/newspapers?id=82UxAAAAIBAJ&sjid=oqUFAAAAIBAJ&pg=1178,2626586&dq=jim-wohlford+gazette&hl=en

This blog is great!
Dave