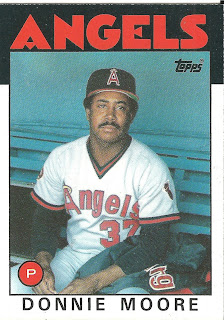 Card thoughts: Moore was definitely one of the more tragic figures in baseball in the late 80s, and he looks pretty sad in this picture, even though he was about to become one of the top closers in baseball.

The player: The Cubs were a terrible team in the late 70s/early 80s, but they had a knack for producing great relievers. When Donnie Moore came up with the Cubs in the mid-70s he shared the pen with Bruce Sutter and Willie Hernandez, both of whom were top relievers in the 80s. But Donnie wouldn’t get success until much later, and then lose everything—including his life.

It took Moore until he was 28 to escape from the minors completely. In between AAA stints, he turned in mediocre middle relief outings for the Cubs, Cardinals, and Brewers. Moore was more noted for his bat. Despite not getting many plate appearances as a reliever, he had a career OPS of .703.

Pitching-wise, it wasn’t until Moore was traded to the Braves in 1982 that his career began to really take off. Developing his secondary pitches (split-finger, slider, and change) allowed him to move into the closers role, despite battling leg injuries in each of his Brave seasons. Moore eventually became one of a trio of closers on the Braves, leading the team with 16 saves.

But Moore was left unprotected by the Braves in the off-season and was “chosen” by the Angels as compensation for losing #55 Fred Lynn to free agency. No doubt he was left unprotected after the Braves signed his former teammate Bruce Sutter to be their closer. With the Angels, Moore would become a dominant closer. In the season represented by this card, he had a career low 1.92 ERA and was third in the league with 32 saves. A first time all star, he pitched two shutout innings in the AL’s 6-1 loss to the National League.

Although not quite as spectacular in 1986, Moore was an integral part of the Angels’ division leading team. Unfortunately, in the ALCS, Moore was one strike away from sending the Angels to the World Series when he gave up a game-tying home run to #221 Dave Henderson. Moore would  later lose the game in the eleventh inning by giving up a sacrifice fly to Henderson.

Moore was never the same after that pitch. He struggled with injuries in 1987 and 1988, before being released. After signing with the Royals, Moore pitched for a time with their AAA affiliate in Omaha before getting released. Depressed and suicidal from the release (and, supposedly the Henderson home run although some have called that a myth), Moore shot his wife and later shot himself a month after his release. 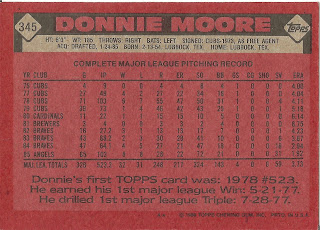 Rear guard: I loved getting cards from the 70s as a kid that showed current players as former Cubs. This is a good one, as it is one of the few Topps cards Moore looks happy on..