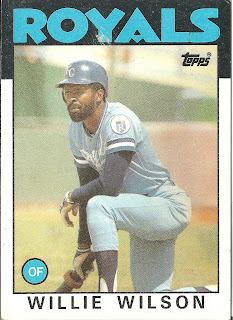 Card fact: That is a bubble gum stain over the "Y" in Royals. And is this a posed shot or an action shot? Hard to say.


Card thoughts: Do ball players in the on deck circle take a knee anymore? Maybe he's waiting for a pitching change.

The player: In his time, Willie Wilson was considered one of the fastest players in the major leagues: Although he only led the league in steals once, he is 12th all time in stolen bases. More than a quarter of his career home runs were inside-the-park jobs and he led the league in triples 5 times including the year shown on this card, when his 21 triples were the most since 1949. He was also an excellent outfielder whose speed was wasted early in his career as a left fielder. His best year was 1980 when he won his only gold glove and finished 4th in the MVP voting while collecting a league-leading 230 hits, 133 runs, 15 triples, and 79 stolen bases in a then major league record 705 at bats. He later won a batting crown with a .332 average in 1982. He had some flaws in his game, however. His high at bat totals were a direct result of an astonishing lack of patience for leadoff hitter: He never walked more than 40 times in a season and he often struck out nearly 100 times in a season in an era where it was rare for a hitter to strike out that much.

Wilson played for 19 years, 15 of them with the Kansas City Royals. He later played for Oakland and for the Cubs. I remember when he came to the Cubs in 1993, I was excited. However, he was no longer the Willie Wilson of the 80s (he was 37!) and was brought in as a backup/tutor to opening day sensation Tuffy Rhodes. It was indicative of those drab early 90s Cubs teams that he eventually got the centerfield job by default. He would be released the following year on my 19th birthday. 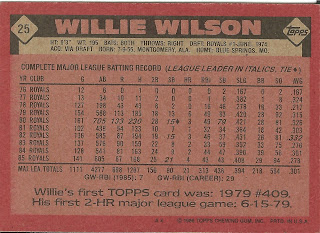 Rear guard: Here's that first Topps card. Those 2 home runs came in a blowout against the Milwaukee Brewers. The first was against starter Mike Caldwell and was a conventional home run. The second was an inside-the-park home run against Bill Castro and broke an 11-11 tie to give the Royals a 14-11 lead.
Posted by Jets Break Jaws at 9:01 PM