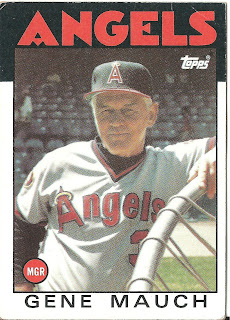 Card thoughts: It may be my imagination, but I seem to recall there being a lot of crusty looking managers in 1985 who had managed for decades. They seemed recycle known quantities much more back then. This was Mauch's 25th year as manager.

The manager: Mauch was a reserve middle infielder with little power for 6 teams over 9 seasons, batting a measly .239. As a manager, in the 27 years he managed, Mauch only had two seasons when he did not manage in the majors from 1960-1987. He was a practitioner of "small ball" and loved riding the opposing players and umpires from the bench. He started by managing the Phillies for most of the 60s, garnering a .486 winning percentage. He was present for the epic collapse by the Phillies in 1964 when, up by 6 1/2 with 12 games to play, the Phillies missed winning the pennant by 2 games. The cause was his decision to ride his two aces, Jim Bunning and Chris Short too hard. Previous to this, in his second year managing the Phillies they lost 23 games in a row.

The Expos must have liked what they saw of Mauch, as he was the first manager in franchise history. Perhaps the 20 losses in a row by Expos in 1969 can be attributed to that, or perhaps Mauch was truly "ill-fated," as many believed. After 7 seasons with the Expos, none above .500, he was hired by the Twins and managed some good teams for them in the late 70s. 3 out 5 of his teams were above .500. Mauch would have his greatest success as the manager from the Angels. But he never won a pennant with them either, despite being one game away in 1982, and one strike away in 1986. The Angels were the only team he would manage to a cumulative record of over .500. He reportedly had to quit because he was chain smoking so much as a manager it was affecting his health. He eventually died of lung cancer in 2005. 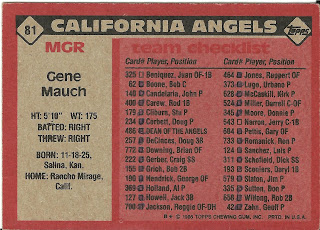 Rear guard: I only needed Jerry Narron and Juan Beniquez to complete the Angels! Of course, the great omission here is Mike Witt, the top pitcher for the Angels in 1985 of whom I had no idea until I was surprised by his existence in the 1986 ALCS. I have no idea why Mike Witt's card was missing for this year, but not in 1985 or 1987. If any one knows, please comment!
Posted by Jets Break Jaws at 9:08 PM