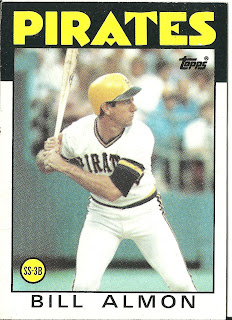 Card thoughts: Boy, that yellow Pirates batting helmet does not go well with the home uniform. This picture makes Almon look like a short guy. He was actually 6'3". You'll note that lots of cards in this set have this kind of teal/light blue blurry background. This is because a lot of the action shots were taken in the astroturfed, all purpose stadia so common in baseball in the 80s. They all had that bluish background. Since Almon is in his home uniform, it's obvious that this photo was taken in Three Rivers Stadium.

The player: It's appropriate this blog is highlighting Bill Almon while the baseball draft is going on. It's also a cautionary tale for all those fans who are certain their team's #1 draft pick is going to be a star. Almon was the first pick overall in the 1974 draft for the Padres, yet he never became a great player. He did lead the league in sacrifices with 20 during rookie year while picking up 160 hits; and later, as the starting shortstop for the White Sox he hit .301 in 1981 (and came in 19th in MVP voting?!); but he spent most of his career as a utility infielder for a variety of teams including the Expos, Mets (twice), A's, and Phillies. Despite all his travels, he was the only trade he was involved was when the Padres got former all-star second baseman Dave Cash from the Expos for him.

Almon was the last player from Brown University to make the majors (which shows he was no slouch in the brains department). He would coach baseball there after his retirement from 1993 to 1996. 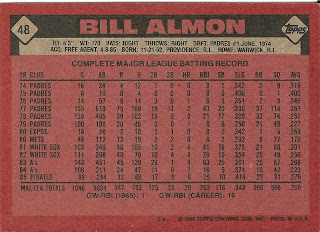 Rear guard: Players in the first round that the Padres passed on to pick Bill Almon: Rick Sutcliffe, Garry Templeton, Lonnie Smith, Lance Parrish, Dale Murphy, and Willie Wilson (all of whose cards also appear in this set).
Posted by Jets Break Jaws at 9:09 PM