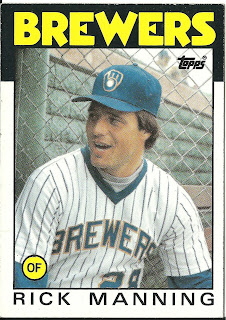 Card thoughts: What's so funny Rick? This candid shot catches Manning in mid-guffaw. I wish the modern club would go back to this classic jersey. The current home Brewers logo and uniform is decidedly dull.

The player: Manning was a hotshot rookie who reached the majors with the Indians at age 20. He never hit for a high average, but he could fly and played a great centerfield, winning the gold glove in 1976. The gold glove season was also his best offensively. Beating the sophmore jinx, Manning hit .292, scored 73 runs and stole 16 bases. The next year, Manning broke his back (!) after landing awkwardly on the astroturf at the Kingdome in Seattle while attempting to steal second. While rehabbing his injury, Manning accepted teammate Dennis Eckersley's kind offer of a place to stay. He promptly took advantage of this hospitality by sleeping with Eckersley's wife. This prompted a trade of Eckersley to the Red Sox after the 1977 season.
One of the highlights of Manning's career is when he caught the final out of Len Barker's perfect game.

Manning was traded to the Brewers in 1983 for Ernie Camacho, Jamie Easterly and Gorman Thomas. He would hit a disappointing .229 with the Brewers and by the time this card was printed, he was a reserve outfielder. He would make his mark in other ways, however. He helped develop the cheesehead hat seen ubiquitously at Packers and Brewers games during his last season in 1987. He is currently the Indians TV color commentator. 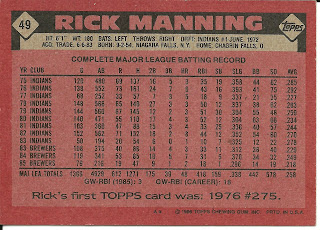