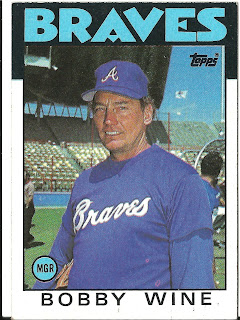 Card thoughts: There were a lot of pictures taken in his spring training park. Wine looks a little overdressed in this picture, and the odd shadows on his uniform makes it look like he's sweating in some very strange places.

The player: As a player, Wine was a good fielding, light hitting shortstop with a career batting average of .215 over 12 seasons. Immediately after his playing career in ended early in the 1972 season, he became a coach with the Phillies. He would stay as a coach in that organization until 1983. After a year away from the coaching box, he would become the third-base coach for the Braves during the year shown on this card. He became the interim manager on August 26 when the Braves fired Eddie Haas. He went 16-25 the rest of the season and would never manage again. In later years, he would become a coach for the Braves (again) from 1989-1990 and the Mets from 1993 to 1996. His son Robbie Wine is a former major league catcher. 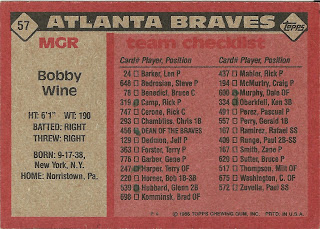 Rear guard: This card has an error. Someone must have sloppily written 51, so the printer thought it read 57. There's a few glaring omissions on the cards Topps chose to print of Braves players. Joe Johnson, who started 14 games was not given a card and neither was Steve Shields, who pitched 68 innings in relief and started 6 games. I must have gotten this card early in the collecting year: Only 6 Braves players are checked off.
Posted by Jets Break Jaws at 10:53 PM