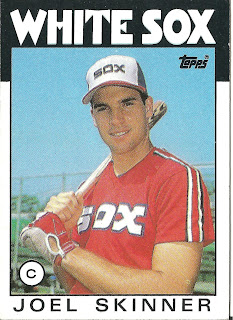 Card thoughts: I used to have one of these mesh shirts in '85. Cool in the summer, yes, but when you sweat in them, they would stick to your skin.

The player: Skinner was the son of the much more successful Bob Skinner, outfielder for several team in the 50s and 60s (there's a father/son card out there from the 1985 set documenting this). His career average of .228 meant that he wasn't going to supplant Carlton Fisk anytime soon as the White Sox starting catcher.

Drafted by the Pirates, Skinner was once again drafted while still in A ball by the White Sox in the now obsolete free agent compensation draft. After some decent minor league seasons where he showed some decent power for a catcher, Skinner made his debut at the end of the '83 season and in 6 games hit .273.

He struggled to stay in the majors full time the next two seasons, including this one, due more to the presence on the roster of veteran Marc Hill than his iffy bat. He did managed to hit .341 in limited duty in 1985, encouraging the Sox to drop Hill the following season and install Skinner as the second string catcher. As Fisk was getting older, Skinner got into a lot of games as a late inning defensive replacement, and didn't make the most of it, hitting .201. In a mid-season salary dump, he was traded along with Ron Kittle and Wayne Tolleson to the Yankees for the far superior backup #157 Ron Hassey.

Skinner hit better for the Yankees, getting his average up to .259 for the rest of the year. But when the 1986 season was done, Skinner was surprisingly third in errors committed by a catcher, despite not being an every day catcher.

Skinner spent the next two years backing up a succession of veteran catchers on one-year deals, but not hitting much, including having an astonishingly low .137 batting average in 1987, a hitters year. A trade to the Indians for the perpetually peeved Mel Hall rejuvenated him a bit, and for the last three years of his career, he at least managed to hit .230 every year.

Skinner later managed in the Indians minor league system, and took over as manager of the big club in 2002, where he led the club to a third place finish, despite going 35-41 in a partial season. Skinner was a bench coach for the A's last year and is now the manager of the White Sox AAA team. 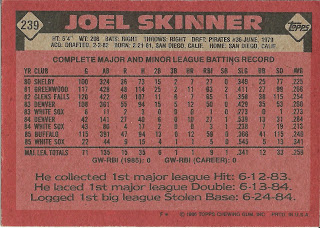 Rear guard: Skinner's led of the third inning of the second game of double header getting a single off A's pitcher Chris Codiroli. This began a six-run rally.

This date in baseball history: The first color television broadcast of a baseball game occurs on this date in 1951.
Posted by Jets Break Jaws at 10:22 AM