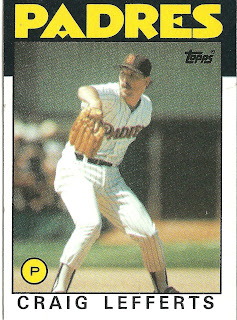 Card thoughts:  Another great photo showing a pitcher in the midst of his motion. You usually can't see this angle when watching a baseball game. It's obvious that part of Lefferts' effectiveness is because he hides the ball so well.

The player: Craig Lefferts was a lefthanded relief pitcher in the days when that didn’t mean pitching to just one guy. And, although rarely hitting, Lefferts is actually the last pitcher to win the game with a home run. It came off the Giants’ Greg Minton in 1986.

Lefferts was born on an army base in West Germany, but played college ball here in the United States, where he won the deciding game in the 1980 College World Series. Drafted by the Cubs, he only played his rookie season with them before being traded to the Padres in a three team trade that brought Scott Sanderson to the Cubs.

Lefferts had a breakout season his first year with the Padres, as his career low 2.13 ERA solidified the Padres bullpen and helped them win the pennant for the first time. He gave up no runs in both playoff series. The 83 games Lefferts appeared in 1986 led the league, and it seemed like he would have a home in San Diego for years to come.  But the Padres traded him in a massive trade to the Giants in just after the 1987 Independence Day.

Lefferts helped the Giants to two playoff berths, and soon became the team’s closer, saving 11 and 20 games from 1988-1989. He continued in this role after he was traded back to the Padres, saving 23 games, ranking in the top ten each of the two seasons he relieved for the team.

A curious thing happened in 1992. After not having started in 8 years, Lefferts was converted by the Padres into a full time starter. Apparently, he was upset after he lost the closing job to offseason acquisition Randy Meyers. Surprisingly, Lefferts was very effective as a starter, going 13-9 with a 3.69 ERA. He was so good, that the Orioles wanted him as a starter for their stretch run, and traded Ricky Gutierrez to get him. Unfortunately for the O’s, he only went 1-3, and they lost the East to the Blue Jays.

Returning the relieving the following year with the Rangers, Lefferts found the magic was gone. Perhaps the career high (by a lot) innings he pitched in 1992 affected his arm. His career high 6.05 ERA was worrisome; his 17 home runs given up in just 83 1/3 innings, appalling.

After a final season with the Angels (he was released in early July), Lefferts retired. He has been a pitching coach in the minors since 1999. 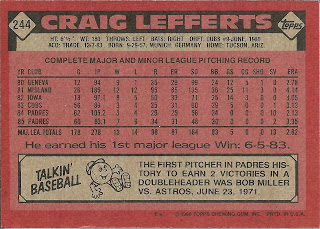 Rear guard: Lefferts was starting when he got his first win against the Pirates. He pitched 7 1/3 innings, giving up only 1 run (on a Tony Pena RBI single), even though he walked 4 and struck out only two.

Bob Miller was a 12-year veteran reliever in 1971, even though he was only 32. The Padres were the second of three teams he pitched for that year, and he won 7 games and had a fine 1.41 ERA. He pitched 4 relief innings in Game 1, and won after the Padres scored a run in the bottom of the 12th on an RBI single by .083 hitter Tommy Dean. In the second game, Miller pitched two more innings. Once again, the Padres prevailed by tying the game in 8th, and winning the game in the bottom of the 9th inning on a double by the heroically named Angel Bravo (who was actually pinch hitting for Miller). Here's Miller airbrushed into a Pirates uniform, his last team of that year.

This date in baseball history: This was the day, in 1981, that #90 Garry Templeton was fined and suspended for obscenely gesturing to St Louis fans after failing to run out a ground ball.
Posted by Jets Break Jaws at 11:03 AM