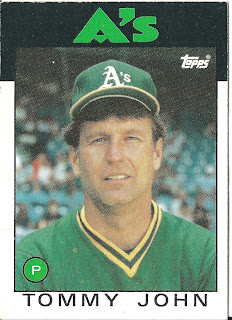 Card thoughts: The name Tommy John just seems wrong to me--too diminutive and cloying for an adult (although Tom John is much worse). By the time this photo was taken, John had played for 22 seasons.

The player: While Tommy John is probably best known today for the surgery named after him that has saved countless big league careers, he was a one of the winningest lefthanders in baseball history, perhaps even Hall of Fame caliber. Only Jim Kaat, as a comparative pitcher, has not reached the Hall of Fame, and he probably should be in as well.

A top prep basketball player, John made his debut for the Indians all the way back in 1963 at only 20. John only pitched two seasons with the club before being traded in a three way trade to the White Sox with the big name being Rocky Colavito. John was very effective in his seven years with the club, with ERAs mainly in lower reaches of the threes. But the late 60s White sox couldn’t hit a lick, and John was only above .500 in 1965 (14-7); 1966 (14-11); and 1968 (10-5). As an example of White Sox futility, John led the league for the second time with 6 shutouts in 1967, but poor run support gave him a record of 10-13.

It was John’s trade for moody slugger Dick Allen to the Dodgers (a much better hitting team) that made John a star. In his 7 years with the Dodgers, John never had and ERA above 3.50 or a winning percentage below .500. Some highlights from his time with the Dodgers include leading the league in winning percentage in 1973 and 1974; winning the Comeback Player of the Year award in 1976 after missing all of the previous season recovering from his namesake surgery; winning 20 games for the first time in 1977; and making the top 10 in Cy Young award voting twice.

After the 1978 season, John signed a fat $2.3 million, four-year contract with the Yankees whose owner, George Steinbrenner, was one of the first to splurge on free agents. John was more than worth the money, as he won over 20 games in both of the non-strike shortened season he played with the Yankees, and once again led the league in shutouts with 6 in 1980. At age 39, John went 10-10 in the early part of the 1982 season, which prompted a trade to the Angels for pitcher Dennis Rasmussen.

John helped the Angels reach the playoffs for the first time by going 4-2 down the stretch. But he had a so-so ALCS, where he pitched a good Game 1 and won, but gave up 6 runs in just 3 1/3 innings for the loss in Game 4. Age really began to catch up to John as he struggled the next two seasons, as his sinker began to hang up in the zone, and hitters pounded out hits (a league leading 287 in 1983).

John was released by the Angels in the season represented by this card, and signed by the A’s for some reason, who he rewarded with an ERA of 6.19. Although most objective observers would have considered this the end for John (after all, he was 42), he refused to quit, signing a series of one-year contracts with the Yankees for the last four years of his career. Although he was often injured, John managed record his last double digit season in 1987, going 13-6.
John finished his career with 288 wins against 231 losses. At the time of his retirement, he held the record for most seasons spent in the majors (later broken by Nolan Ryan). But his longevity is held against him in the Hall of Fame balloting, as it is believed that his career win total came more from persistence rather than dominance.

Activities post-retirement include managing the Bridgeport Bluefish in an independent league and hawking a muscle ache cream for aging athletes, GoFlex. John’s son, a former child star on Broadway, died of an overdose in suburban Chicago, and his daughter is married to a Chicago Bears player.

Rear guard: That is the most important "On Disabled List" you will ever see on the back of a baseball card. Plus, I don't know how they fit all of John's subsequent years on the back of his later cards. The type is already pretty small.


This date in baseball history: Milwaukee Brewers superfan Milt Mason ends his occupation of a team sponsored trailer on top of the scoreboard when the team finally drwas over 40,000 fans in 1970. Mason, a former tain engineer, is the inspiration for Bernie the Brewer, the team's beloved mascot.
Posted by Jets Break Jaws at 7:34 PM