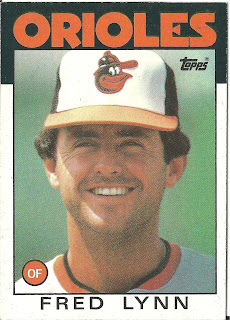 Card thoughts: For he's a jolly good fellow . . . with his cap too low over his eyes. I do miss the old cartoony Orioles logo. Looks like it came off a sugar cereal box. This is Lynn's first card in an Oriole uniform.

The player: To say Fred Lynn arrived on the scene with a bang is an understatement. He won both Rookie of the Year and MVP in 1975, his first full season. He also got a gold-glove for his stellar defense in centerfield and the first of 9 straight all-star appearances. He ended up leading the league in runs, doubles in slugging percentage. He also drove in over 100 runs and batted .331, the first of 4 .300+ seasons. He would surpass that season in 1979, leading the league in batting, hitting 39 home runs and driving in 122, fininshing runner up to Don Baylor, Ken Singleton (!), and George Brett in MVP voting.

Boston really messed up in 1981 by not mailing Lynn a contract in time--technically making him a free agent if he wasn't traded (does this ruke still exist?). He requested a trade to the Angels, near where he grew up. The Red Sox made a terrible deal, getting a fading Joe Rudi, inconsistent (and bad for the Red Sox) Frank Tanana, and go-nowhere minor leaguer Jim Dorsey. They even threw in pitcher Steve Renko with Lynn! Although the cool, dry air of the West Coast nights diminished Lynn's batting numbers, he was remarkably consistent with the Angels (and starting in 1985 the Orioles) hitting 20-25 home runs a year and driving in about 60-80 runs a year throughout the 80s...great numbers for a centerfielder who also fielded his position well.

But although Lynn started his career with Pujols-like numbers, he only ended up with about 1,000 runs driven in and scored, 300+ home runs and a .283 lifetime average, summing up a good but no great career (Lynn offensively most resembles Carlos Lee of today's players.) In his post-baseball career, Lynn has supported animals and abused children in his charity work. If you need more Fred Lynn info, he's got a fan page. 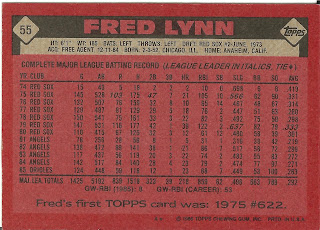 Rear guard: Here's Fred Lynn's rookie card, one of those multiple rookie cards Topps used to be so fond of (and I miss). Usually, these were top prospects that may or may not have played their first major league game by the time the card was issued. Of the other players sharing this card, Terry Whitfield was still playing in 1985 (his card will be reviewed later), but was mostly a marginal outfielder his entire career; Ed Armbister was a reserve outfielder until 1977; and Tom Poquette had a couple of good years with the Royals in the mid-70s. This is Lynn's 1976 card, one of the all-time no-brainer all-star rookie trophy holder.