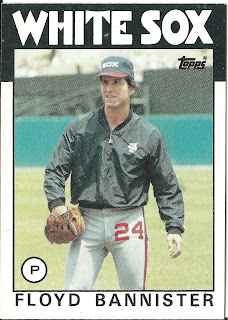 Card thoughts: I really hate these cards with the players wearing jackets. Makes them look like they are wearing pajamas or something. The photographer caught Bannister in a weird light. If you look closer, you'd swear he was wearing a silly putty mask.

The player: I remember thinking Floyd Bannister was a pretty good pitcher. And he was for the White Sox in this era, having 16 win seasons for them in 1983 and 1987. Unfortunately, due to playing for bad teams (see the Mariners in 1982, when he led the league in strikeouts yet had a 12-13 record), Floyd Bannister for most his career was quite mediocre. The Astros sure expected more. He was drafted as the first pick in the country (as shown by this Topps card) and burned through the minors. But the Astros gave up on him after two seasons, sending him to the Mariners for Craig Reynolds, who was a decent enough shortstop but not really a good exchange for a former #1 draft pick. Bannister struggled to post a plus .500 record with the Mariners, but was starting to show promise by 1982. He decided to sign with a better club the next season and was a huge part of the White Sox making the playoffs that year. He lost his only ALCS start, however, giving up 4 runs in 6 innings against the Orioles. After 1988, he drifted from the Royals, to Japan, to the Angels, and finally ended his career with the Rangers in 1992.

His son Brian Bannister played for the Royals and Mets in the early part of this century. Both father and son played with ageless wonder Julio Franco. Here's a nice article detailing Bannister's post baseball life. 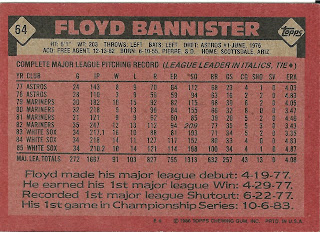 Rear guard: Lots of room for Bannister's accomplishments on the back. Bannister's debut came in relief, when he gave up two runs to the Giants, taking the loss. He would get his first win 10 days later, pitching a complete game against the Pirates, giving up 3 runs, 3 walks, and 11 hits while striking out 9. Hardly a dominant performance.
Posted by Jets Break Jaws at 9:40 PM