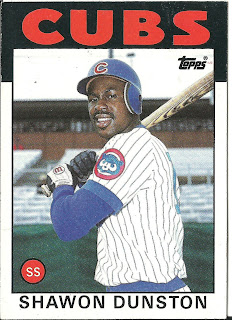 Card thoughts: There's something odd about this picture, which is Dunston's rookie card. Maybe it's the white uniform against the white seats on a cloudy Arizona day that makes Dunston's face and the red circle on the Cubs logo really stand out.

The player: Allow me the wax rhapsodically for a bit. When you're 10 or 11, you are an innocent baseball fan. You don't care about player salaries. You don't care exactly what a player's average is. You don't care that the team you follow never seems to win. You latch on to personalities, the way a player carries himself. You tend to have a bias towards exciting players--players that steal a base, players that run hard, players that make dramatic plays (even when those plays result in errors), regardless of the outcome in their stats at seasons end. For all of these reasons, Shawon Dunston was one of my favorite players growing up.

The Cubs rushed Dunston, a former #1 overall draft pick, to the majors despite the fact he had virtually no plate discipline in the minors. He was the opening day starter for the Cubs in 1985, but performed poorly and was sent down after a month or so, ceding the position to the veteran tandem of Chris Speier and Larry Bowa. He came back later in the year and hit better, claiming the Cubs starting shortstop job for the next eleven years (minus two years for injuries and a one year sabbatical in San Francisco). In those years, he teamed with Ryne Sandberg and Mark Grace to give the Cubs their most solid infield since Banks-Kessinger-Beckert in the late 60s and early 70s. Dunston's had incredible range at short, and his arm, while strong, was erratic, leading to many balls thrown into the stands. This picture illustrates the amazing athleticism of Dunston turning a double play.

As a hitter, Dunston was notorious for his impatience. He never walked more than 30 times a year and often walked 15 times or less in over 500 at bats. He was a cult hero for Cubs fans, in part because of the Shawn-O-Meter, which updated Dunston's average after each at bat. In the pre-internet days, this was an invaluable resource for a young baseball fan. He even had the chicken sausage named after him at famed sausage emporium Hot Doug's (now the Steve Swisher). Despite his impatience, Dunston generally hit between .250 and .270 during his time with the Cubs with outstanding speed (stole more than 20 bases 4 times) and occasional power (over 10 home runs 5 times, including this grand slam in the bottom of the ninth to beat the Phillies). He was named to the all-star squad in 1988 and in 1990, when he got to play in front of his hometown fans. An integral part of the Cubs lineup, he was starting to really hit his hitting prime in 1992 when he injured his back. He barely played in 1992 and 1993 and would sign as a free agent with the Giants in 1996. He would come back to the Cubs for a swan song in 1997, but was traded at the end of the year to the Pirates. And thus began Dunston's vagabond days. No longer healthy enough to play shortstop full time and ever the team player, Dunston reinvented himself as a utility player for the remaining 5 years of his career, playing that role with the Indians, the Giants, the Cardinals and the Giants (twice). He actually ended up as a reserve outfielder by the end of his career, far away from his glory days at short.

Dunston's namesake son was drafted by the Cubs this year. Rear guard: Ernaga would have only one more home run in 1957 (and his career) although he did hit .317 as a reserve outfielder/pinch hitter. It was hit off of future hall-of-famer Warren Spahn. He added a triple for good measure.
Posted by Jets Break Jaws at 9:32 PM