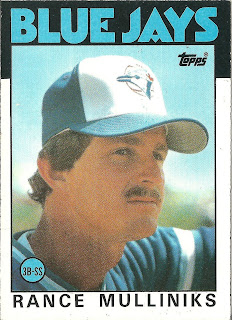 Card thoughts: Big mistake by Topps on this card. Mulliniks didn't play one game at shortstop in '85. He was the Jays regular third baseman, though. I had a big problem with this guy as a kid. The name just bothered me; it never sounded right in my head. Rance as in rancid? And Mulliniks sounds like something Eskimos wear on their feet (mukluks?). I can't believe this guy isn't Canadian. Apparently, Rance wasn't as bothered as me-- he looks absolutely bored in this picture, although he's really rockin' the 'stache (and still does!). He would also be right at home on this show.

The player: Mulliniks came up with the Angels and also played with the Royals, but he'll always be known as a Blue Jay. Mulliniks split the Blue Jays regular third baseman gig from 1982 to 1987 with Garth Iorg and, later, Kelly Gruber. He barely ever played against lefthanders, but raked righties. He hit over .300 several times and had a great on-base percentage (.400 for his career). but had more of a shortstop's power numbers (his original position) than a corner infielder. He was remarkably consistent over his career with the Blue Jays, hitting about 10 home runs, driving in 45 runs, and getting about 100 hits a year. He retired with Blue Jays record for fielding percentage at third base with a .975 and pinch hits with 59.

He was popular as a player with the Blue Jays fans, which likely led to his becoming an analyst for Blue Jays television broadcasts after his playing days were over. He was fired from that role before this season. 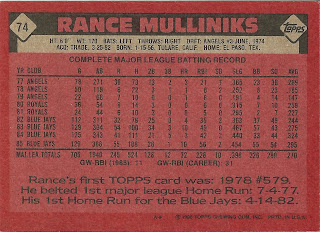 Rear guard: Here's that first Topps card: an unhappy looking Mulliniks, sans mustache. He looks older in 1978 than he does in 1986. His first home run was off of Oakland A's pitcher Rick Langford and drove in third baseman Dave Chalk. He went 3 for 3 that day. I'll have to keep a lookout for any other citations of "first homerun for (current club)." Perhaps Topps was aware of Mulliniks popularity with Blue Jay fans in adding this "first."
Posted by Jets Break Jaws at 10:17 PM