The first 100 cards are done! Here's the stats:

The most popular page view? A tie between Steve Yeager (for some unknown reason), and Pete Rose. 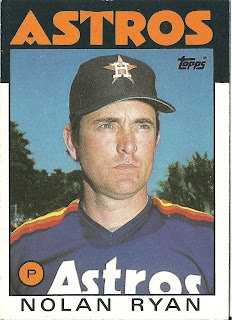 Card thoughts: This card looks like a painting. But this how you always saw Ryan: fierce, never smiling.

Ryan broke in at a young age in the Mets bullpen, where he had lightning stuff, but was too erratic at that age to make much of a mark in the rotation. After some decent years with way too few strikeouts with way too many walks, the Mets gave up on him in 1972 and traded him with a package of young players to the Angels for future manager and aging infielder Jim Fregosi. For a bunch of bad Angels teams, Ryan tried his best. Although his record barely was over .500, his ERAs were good, and he was striking out players at a phenomenal rate. He struck out over 300 batters 5 out of the first 6 years he was with the Angels, culminating in an amazing 383 strikeouts in 332 2/3 innings in 1974, another record.

Weary of the losing atmosphere in California which had cost him so many wins, Ryan signed as a free agent with the Astros in 1980. He would spend the next 8 years there and he became more of a pitcher with the Astros than a thrower. He led the league in ERA twice, including a 2.76 mark in 1987, despite an 8-16 record. He also cut down on his walks, while his strikeout rate remained high: He led in strikeouts in 1987 and 1988.

At 41, many people thought Ryan was done, but after he signed with the Rangers in 1989, he managed to lead the league in strikeouts two more times, and win in double digits three more times . . and get in a famous fight, where he put Robin Ventura in a headlock and pounded him after he charged the mound. Ryan retired in 1993 and managed to win over 300 games, despite a .526 winning percentage, mostly attributed to being a part of many bad teams. He did pitch in the World Series once (with the Mets in 1969) and the division series 5 times with the Angels and the Astros, where he pitched well. Ryan is now the principal (and very visible) owner of the Rangers, having previously owned the Astros AAA affiliate the Round Rock Express. 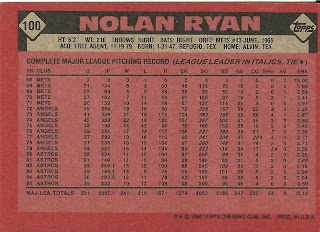