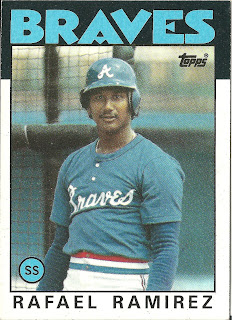 Card thoughts: In our ballplayers that look like animals series, we have Ramirez, the ferret. This also one of those card where the proper amount of laminate wasn't applied.

The player: I was always under the impression that Ramirez was a stellar fielder with a mediocre bat, like an 80s version of Neifi Perez. But he actually was a poor fielder with a decent bat, albeit he was a deceptively productive player. Ramirez came up in 1980 and showed some decent pop in his bat for a shortstop. He had some speed too, stealing over 10 bases five times in his career. But he was an awful base stealer, getting caught almost as much as he succeeded. Despite having good range that allowed him to get to balls many shortstops couldn't, he exercised poor judgment when he got to those balls, leading the league in errors from 1981 to 1985 and again in 1989. Like fellow teammate #78 Bruce Benedict, Ramirez had his best years from 1982 to 1984 when the Braves were perennial contenders. He slugged 10 home runs and drove in 52 in 1982 when the Braves won the division; the next year he hit a career high .297; and the year after that he made his only all-star appearance. In the rest of his career as a regular shortstop, he could be counted on to play a lot of games at shortstop, while hitting around .250 and driving in about 50 runs. He spent the last four years with the Astros, retiring in 1992. 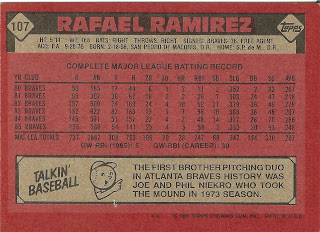 Rear guard: Phil Neikro is in the Hall of  Fame and is one of the greatest knuckleballers of all time. His brother Joe, who won over 200 games in his career, was a reacquainted with the knuckleball when he joined his brother with the Braves, which led to much of his late career success and longevity in the game. The Neikro brothers will show up on the same team in this card set as well.
Posted by Jets Break Jaws at 9:14 AM