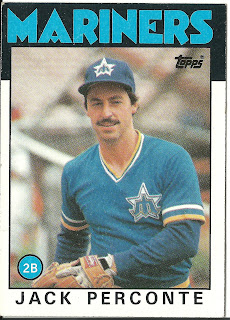 Card thoughts: There's lots of pictures taken in this set of players on cold, miserable days early in the season. This is one of them (and Perconte has one of the best mustaches yet!)

The player: Before ever reaching the majors, Perconte was part of a legendary team. The 1981 Albuquerque Dukes, the Dodgers AAA farm club, is considered the 9th best all time. Part of the reason is that the Dodgers had such a great farm system in the 70s and early 80s, that players were often stuck for several years in AAA, despite having great numbers. Perconte was one of them. He had hit well over .300 for three straight years at Albuquerque, scoring over 100 runs in two of them. Perconte finally got short chances in the majors in 1980 and 1981, but his inability to turn the double play really hurt him. The Dodgers eventually traded him to the Indians with future star Rick Sutcliffe for Jorge Orta, Larry White, and Jack Fimple. The Indians made Perconte their starting second baseman in early 1982, but his fielding woes and .237 average eventually sent him to the bench in favor of Larry Milbourne. No longer having a major league place for him, Perconte was traded to the Mariners with Gorman Thomas for fellow second baseman Tony Bernazard. He would have his best season in 1984. Choking up on the bat (something rarely seen by batters these days), allowed Perconte to skip lots of balls through the infield at the Kingdome. He had a career high 180 hits, hit .294, and scored 93 runs. He was also 7th in stolen bases with 29.

He also had the first of two bizarre "Little League" home runs off of Jack Morris and the Tigers. Both times he scored on balls hit no more than 30 feet. After bunts, Morris through the ball away down the left field line; then later in the play, the leftfielder threw the ball in the 3rd base dugout, allowing Perconte to score.

Perconte couldn't replicate his success in the season shown on this card, as his average dropped to .264, although his OPS was similar. He did make the top ten in steals again with 31. Perconte was released at the end of the season and signed by the White Sox for one last season, but he mostly played in the minors as insurance for the major league club.

Perconte is currently a sports motivational speaker/life coach who has written two books on how to raise an athlete. He has his own Website and I'd highly recommend checking his out his diary. The most interesting insights about baseball often come from the players who had little major league success. 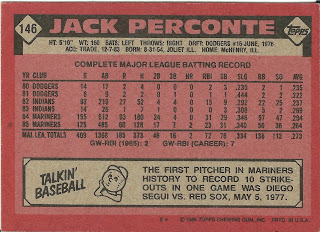 Rear guard: Diego Segui was 39 and in his last season when that 10 strikeout feat was accomplished. Despite the 10 strikeouts, Segui gave up 5 runs and was beat by future hall of famer Fergie Jenkins. Segui had at one time led the league in ERA, but he had a sub .500 career record, and his final season he went 0-7 with a 5.69 ERA and 91 strikeouts, mostly as a reliever. Segui had a Mariners 1977 card, but no 1978 card, despite the Mariners having played no games in 1976. His son, David Segui, played for many years and many teams, mostly during the 1990s.
Posted by Jets Break Jaws at 10:18 AM

Diego pitched both openers for the Seattle Pilots and the Mariners.

Thanks for the memories! Jack Perconte was one of the Mariners I mimicked at the plate in my Seattle backyard.

Also note: The second, from 1985, involved throwing errors by Tom Brookens, 3B, and Alejandro Sanchez, RF. Jack Morris was again the pitcher, but the third baseman was the one who fielded the ball and threw it away.

Fun notes: Jack Perconte choked up on the bat eight inches (or more when facing a hard-throwing pitcher)... He hit as many Little League Home Runs as Big League Home Runs in the Majors, with two each over seven seasons and 433 games... His 1984 LLHR scored two runs and was the game winner... His two 1985 dingers and the 1985 LLHR were all lead-off "home runs".