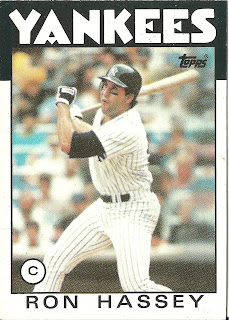 Card thoughts: Always the most exciting part of the game: The foul pop to the right side. I will mention that I believe there are more home in-action shots of the Yankees than any other team. That’s what happens when you play in the biggest media market in the country (also, that’s where the Topps headquarters is).
The player: Ron Hassey was an unusual backup catcher, in that he was valued more for his offense than defense. He began his career with the Indians in 1978, and became their starting catcher in 1980, a role he would have until 1984 when he demoted all the way to third-string. Hassey had some good years as a starter, including hitting .318 with 8 home runs and 64 RBIs in 1980. He also caught #24 Len Barker’s perfect game in 1982; Hassey would also catch Dennis Martinez’ perfect game in 1991 when he with the Expos, making him the only catcher in history to catch 2 perfect games. He was eventually sent to the Cubs in June of 1984 along with Rick Sutcliffe for Joe Carter and Mel Hall. Hassey hit .333 in extremely limited duty as the Cubs won the division.
Hassey was on a move again in the off season, as the Cubs decided they liked Steve Lake’s defense better. He went to the Yankees with #94 Rich Bordi in the trade that brought Brian Dayett and Ray Fontenot to the Cubs. Catching knuckleballer Phil Neikro that year, Hassey led the league in passed balls with 15, despite only playing in 92 games. He did hit a career high 12 home runs, not surprising due to the close left field fence in old Yankee Stadium, and an impressive slugging percentage over .500. Hassey moved on to the White Sox in 1986 and 1987 (hitting .353 in 150 at bats in 1986) and then to the Oakland A’s from 1988-1990. With the A’s, he won 3 pennants and a World Series in 1989 (although he didn’t play in that series). Hassey hit .323 in those playoff series and was the starting catcher in the 1988 World Series.
Hassey finished his career with the Expos in 1991. Since then, Hassey has coached in the majors with the Rockies, Mariners, and Cardinals. He currently manages the Marlins AAA club. 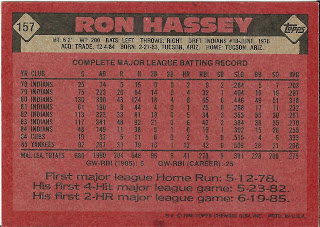 Rear guard: It's appropriate Hassey's first multi-home run game came in his biggest power year. Both were solo shots that led off an inning in a 10-0 blowout against the Orioles. One came off the guy he would later catch a perfect game for, Dennis Martinez. Here, Martinez couldn't even finish the 2nd inning. The other was off Ken Dixon.
Posted by Jets Break Jaws at 7:00 PM