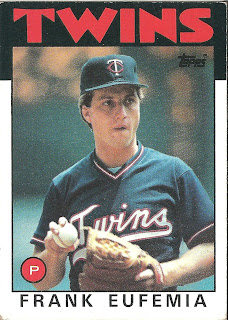 Card thoughts:I always got this guy mixed up with Pete Filson. And, I couldn’t pronounce his name. This is Eufemia’s only Topps card, and he's either chewing tobacco or sucking on a Gobstopper.

The player: This will be a short post. This season was Eufemia’s only one in the majors. He debuted on May 21 (pitching 3 1/3 innings and striking out 2) and his career ended October 1 (1 inning, 1 walk, 1 strikeout). In between, he relieved in 37 other games, struck out 30, and saved 2 games.

Eufemia attempted a couple of minor league comebacks, once with Tidewater (Mets) in 1992 and again with New Jersey (Independent) in 1998, but neither of them worked out. He is a gym teacher at a high school in Montvale, NJ. 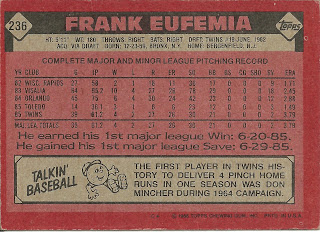 Rear guard: Eufemia's first save came in a close 1-0 victory over the White Sox. He was lucky to get the save. After starter Mike Smithson walked Carlton Fisk with one out, Eufemia was called on to relieve, where he promptly gave up a single to Ron Kittle, advancing Fisk to second. In what must have been a base running blunder, Fisk was somehow thrown out at third on a single to right by Jerry Hairston. Eufemia then retired Ozzie Guillen with a flyball to right to earn the save.


Don Mincher was a typical mid-level slugger in the 1960s, generally hitting about 20 homers a year, and struggling to hit over .250. He had 7 hits in 44 pinch at bats in 1964. Here's Mincher's card representing that year.
Posted by Jets Break Jaws at 12:34 PM