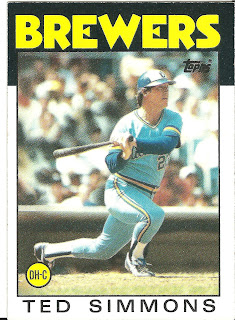 Card thoughts: This is a quite impressive shot of Simmons “genuflecting” while ripping a ball to left. In the position circle, the “C” designation is more honorary than honest, as his secondary position was at first. I remember Simmons when he was a creaky, washed up backup catcher for “America’s Team,” the Atlanta Braves, who I watched on TBS in the mid 80s when I was desperate.

The player: A really good case can be certainly be made for Simmons being in the hall of fame. One of the best hitting catchers of all time, he drove in over 90 runs 8 times and over 100 3 times. For his career, he hit .285 and had nearly 2,500 hits, similar to Carlton Fisk, Yogi Berra, and Gary Carter, all in the Hall of Fame. Simmons’career hits at catcher was a record until Ivan Rodriguez broke it; his one-time record 483 doubles was also broken by Rodriguez. Oh, and he did this all as a switch-hitter.

A first round draft pick of the Cardinals, Simmons made it to the majors in 1970, platooning with Joe Torre, no slouch in the hitting department himself. Torre was moved to third in ’71, and Simmons became the starting catcher for the next decade. With his long hair and tendency to get his uniform dirty, he became perhaps the most beloved Cardinal of the decade, a lone bright spot on several lackadaisical teams.

As a starter for the Cardinals, he was remarkably durable, catching over 140 games 4 times. The Cardinals would often stick Simmons in the outfield or at first on his off days at catcher, just to get his potent bat in the lineup more often. Although not much of a power hitter (who was at spacious old Busch Stadium?), he consistently had his slugging percentage above .400, due to his ability to drive the ball deep into the gaps.

It is hard to pick out a standout year with Simmons because he was so remarkably consistent in the 70s. A few highlights include being the starting catcher in the 1978 all star team; rarely striking out more than 40 times in a season; driving in over 100 runs two straight seasons (1974 & 1975), despite barely hitting 20 home runs; and leading the league in intentional base on balls twice (1976 & 1977), a measure of how dangerous opposing pitchers found him in clutch situations.

Simmons also set a couple of records, including most hits by a National League catcher (188 in 1975) and most home runs and RBI in a season by a Cardinals catcher. But Simmons intensity on the field often spilled over off the field. Of course, one of the objects of his rage was well-known loudmouth and jerk John Denny, who he beat up in the clubhouse in 1976.

A more ominous feud with manger Whitey Herzog (both GM and manager of the 1980 Cardinals) led to his trade to the Brewers. Apparently, Herzog wanted Simmons to move to first, and the latter refused the move, and in fact went public with his complaints. This was all it took to be traded with #185 Rollie Fingers and Pete Vukovich for a bunch of scrubs who never amounted to much with the Cards. These three players would become to core players on the “Harvey’s Wallbangers” squad that went to the 1982 World Series. Simmons drove in 97 runs that year, and in the World Series he hit 2 homers and drove in 3.

1983 was Simmons last good year. All of those games behind the plate began to take their toll, and, being in the American League, he began spending a substantial time at designated hitter. Simmons was a starter that year in his last all star game, and he had a season similar to his best years in the 1970s. He hit 18 home runs, drove in 103, and hit .303.

This convinced the Braves to add the aging Simmons as the backup first baseman/third-string catcher in 1986, although he ended up mostly pinch hitting for them the last three years of his career. Getting into about 75 games a year, he managed to hit .248 over the three-year span.

In his post-playing days, Simmons has held a variety of front office positions, including general manager of the Pirates (he had retire after a year when he suffered a heart attack), director of player development for the Cardinals and Padres, and a scout for the Indians. On the field, he served as Bud Black’s bench coach for the Padres in 2009 and 2010. Simmons is now a senior advisor with the Mariners. 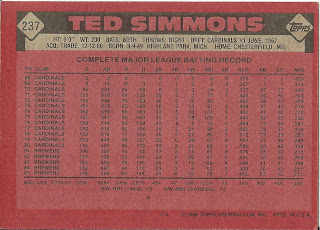 Rear guard: These are almost Simmons' entire career numbers. He would only hit 10 more homers and 66 more RBIs in 411 at bats over the next three years, the equivalent of one of Simmons' off years in his prime.

This date in baseball history:  Thurman Munson, the star Yankee catcher, dies in private plane crash in 1979. Munson was learning to fly the plane.
Posted by Jets Break Jaws at 9:51 PM