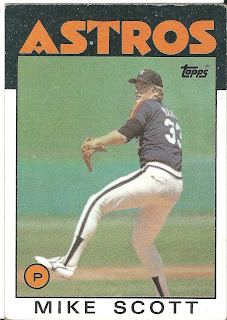 Card thoughts: Scott looks like he’s going to fall over.

The player: Mike Scott was a mediocre pitcher with a great fastball and no good secondary pitches. That is until he discovered the split-finger fastball (and/or started scuffing the ball, as was rumored). A high draft pick by the Mets in 1976, Scott has some success in the win column in the Minors (14 wins at Jackson in 1977; another 10 at Tidewater the next year), but despite a blazing fastball he didn’t strike out a lot of guys.

The Mets gave up on Scott, and in what turned out to be a terrible deal, traded him to the Astros for fourth outfielder Danny Heep. In the more pitching friendly Astrodome, Scott had his first winning season, going 10-6 with a career low 3.72 ERA. But he regressed to the mean in 1984, sporting a terrible .313 winning percentage (5 wins against 11 losses).

Clearly, Scott was at a career crossroads. Desperate for help, he took the advice of teammate #197 Enos Cabell, who had seen what the Tigers pitching coach Roger Craig had done for Jack Morris. The secret was the split-fingered fastball, and as Craig was between coaching gigs in the winter of 1984, he taught it to Scott.

The change in effectiveness was dramatic. Scott was one of the more dominant National League pitchers when this card was issued, even surpassing teammate #100 Nolan Ryan. In the first of what would be five straight star campaigns, he went 18-8 with a 3.29 ERA. He still wasn’t striking out a lot of batters, more often getting players to pound the ball into the ground.

That would all change in Scott’s Cy Young award winning 1986 campaign. Although he once again won 18 games, the improvement in his other statistics was dramatic. He led the league in ERA with 2.22, and strikeouts with 306 (in 275 innings pitched). Scott struck out an extraordinary 4 batters for every one he walked. The most dramatic moment was when he pitched a no-hitter against the Giants to clinch the division (radio call here).

Scott’s dominance continued in the playoffs he completely dominated the Mets in Games 1 and 4, psyching them out by either scuffing or pretending to scuff the ball. He did not get a chance to do it three times, as the Mets won the pennant in 16 innings in Game 6.

While the split-finger fastball was one of the most popular “new” pitches (although it developed out of the older forkball) in the 1980s, it has rapidly gone out of favor, as many pitching coaches suspect it effects the speed of the pitcher’s fastball over time. Only 13 pitchers today throw the pitch regularly. 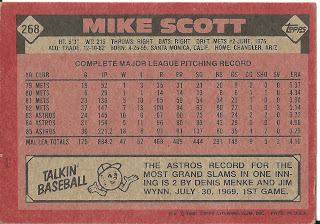 It's worth a short paragraph about the inning these guys both hit grand slams in. It was an 11-run ninth inning against two hapless Mets pitchers, Cal Koonce and Ron Taylor. 14 players came to the playte (both Wynn and Menke batted twice, with Wynn scoring first on Menke's grand slam, and later on his). There were 4 walks, 7 hits, and one passed ball. Nobody was left on base.

To add insult to injury, this was only the first game of a doubleheader, and Astros scored 11 more runs in the second game to sweep it.