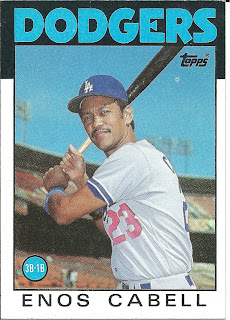 Card thoughts: Although my gut says this is Candlestick Park, more likely it is Shea. I can't tell without seeing the color of the walls.
The player: Cabell was very much a player of his time. An average defender at both first and third, he did not hit with the power expected at those positions. Cabell was also notoriously impatient at the plate, leading to few walks. His name has come up recently in connection with Angels' third baseman Mike Trout. It turns out Cabell was the only player since 1950 (before Trout) to become a starting third baseman in the majors with no previous minor league experience there.
Cabell played first, third, and the outfield when he came up with the Orioles in 1972, about the same time as the player in the previous post, #196 Doyle Alexander joined the team. Boog Powell was blocking him at first, so the Orioles shipped him to the Astros in December of 1974. At first, Cabell filled the same utility role as he had on the Orioles, as he was blocked once again at first, this time by Bob Watson. The Astros' solution was to shift him to third, after incumbent third baseman Doug Rader was traded to the Padres.
Although he did not hit with the power expected of a third baseman, Cabell was always decent at getting on with a hit. He had a trio of good years beginning in 1976. His best season was in 1977, when set career highs in runs (101), doubles (36), and home runs (16). Playing every game in the next season, Cabell was 3rd in the league in hits with 195 (which was an Astros record at the time), and placed in the top 10 in runs scored and stolen bases, and led the league in at bats, despite not being a leadoff hitter.
Cabell continued for two more years as the Astros starting third baseman and put up decent, if not spectacular, offensive numbers. A trade after the 1980 season landed him with the Giants, where he moved back to his natural position at first, and exhibited great range.
His time with Giants lasted only one season, and he was traded at the beginning of spring training in 1982 to the Tigers for the awesomely named Champ Summers. Cabell hit the first two home runs of the Tigers season, but hit none after that as he suffered through a weak offensive season. The next year, however, Cabell had his first year of hitting over .300, batting .311. But his power numbers and on on base ability continued to be bad.
Cabell returned to the Astros for the 1984, and part of the 1985 season. His 1984 season was almost identical to the previous one, as his average dropped one point, and his RBIs dropped by 2.
Midway through the season shown on this card, Cabell was traded to the Dodgers, where he actually played more third than first for the first time in several years. Cabell made more news off the field, as he, along with Keith Hernandez, were the two players who named names at the Pittsburgh drug trials. Cabell pretty much used cocaine for almost a decade, getting high with teammates on several teams, as well as opponents, who he named in court. Cabell didn't seem too remorseful for his actions: He stated he always hit better when he was on coke. He was suspended for the entire 1986 season; however, the suspension was declared void since 10% of his salary went to drug prevention programs. Cabell only lasted one more year anyway, hitting .256 in 277 at bats, playing a variety of positions. 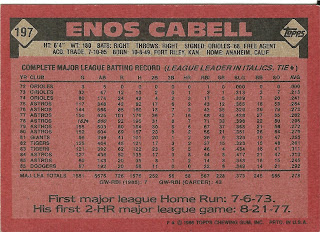 Rear guard: Cabell was busy in the second game of that double header on July 6th: He also stole a base, and was caught stealing. His home run was off of A's star pitcher, Vida Blue.
This date in baseball history: In an inauspicious start for the new New York Mets franchise, the lose to the Cardinals 11-4. They would go on to lose 119 more in 1962.
Posted by Jets Break Jaws at 9:39 PM