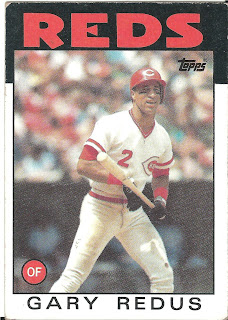 The player: Redus was blessed with both power and speed, but only consistently showed the latter. His most magical pro season came in rookie ball.

About that amazing season: Redus still holds the professional league record for batting average. At Billings in 1978, Redus hit .462, 100 points higher than the second place batter, teammate Skeeter Barnes. In 68 games, Redus scored an incredible 100 runs, and ended up with a .559 on base percentage.

While he would never have another year like that one, Redus continued to hit .300 in the minors before he came up for good in 1983 with the Reds. His rookie season showed the same promise as his Billings year, as he scored 90 runs, slammed 17 home runs, and stole 39 bases as the Reds starting left fielder. A good article on that season can be found here. But Redus would never show that kind of power again. His home run totals dropped to 7 in 1984, as the Reds tried to bat him leadoff for most of the year. By the year this photo was taken, Redus had become a fourth, or platoon, outfielder, where he was useful for his defense, speed (his career stolen base success rate was a robust 79%), and ability to get on base.

Since the Reds now had Nick Esasky patrolling left, Redus was expendable, and he was sent to the Phillies with Tom Hume for pitchers John Denny and Jeff Gray. Redus power returned in Philly where he swatted 11 home runs in just 340 at bats.

This production attracted the White Sox, who made a deal for him at the end of spring training in 1987. Redus would play in the most games since his rookie year, and managed to reach the top ten in steals (a career high 52). He also established career highs in hits (112) and doubles (26). However, his average and OPS were fairly low for a corner outfielder (.236 and .790, respectively). When the White Sox were floundering midway through the 1988 season, Redus was sent to the Pirates for backup catcher Mike Diaz.

With the Pirates, Redus would have his most sustained success, as manager Jim Leyland used him all over the outfield and at first base during the triumvirate of years (1990, 1991, 1992) when the Pirates won the old Eastern Division. A highlight of his tenure with the Pirates is when he hit for the cycle on August 25, 1989. Redus was also a good hitter in the 1992 NLCS, where he put up Billings-like numbers, hitting .438 with a 1.313 OPS while sharing time at first with Orlando Merced.

Redus finished out his career with the Rangers, where he spent most of the 1994 season (his last) on the disabled list with an elbow injury. He now runs a baseball academy in Decatur, GA. 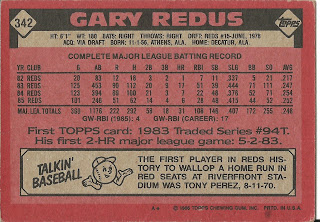 This "Talkin' Baseball" is missing an article before "Red Seats" which makes it highly confusing. I guess everyone was supposed to know that the red seats were in the third outfield deck. The #85 Tony Perez blast came off Mets pitcher Jim McAndrew.
Posted by Jets Break Jaws at 8:51 PM