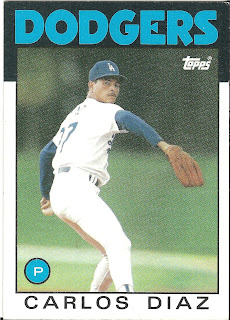 Card thoughts: At first glance, this looks like another Tiger Stadium card.

The player: Carlos Diaz was striking out about a man an inning as a reliever before it was the hip thing to do. Which explains why he got traded so much in his short career. I also have some weird memory of him throwing 100+ miles an hour, but I’m not sure if that recollection is a false one.

Drafted by the Mariners, Diaz had just jumped from A to AAA ball, when he was traded to the Braves, straight up, for #168 Jeff Burroughs. After 2 more successful seasons in AAA, he was promoted in 1982 to the Braves, where he had a fairly pedestrian couple months before being sent to the Mets with only three weeks left in the season for nonentity Tom Hausman.

Diaz would turn in his finest major league season in 1983, when he pitched in a career high 54 games with a fine 2.05 ERA. Apparently believing that season was a fluke, the Mets engineered a great trade (for them) with the Dodgers, getting future star Sid Fernandez and AAA mainstay Ross Jones for Diaz and utility infielder Bob Bailor.

Despite pitching in a pitchers park, in a pitchers division, Diaz’ ERA ballooned to 5.49 in 1984. But by the time this card was issued, his career had righted itself and he was generally effective, as he had career highs in wins (6) and strikeouts (73) while only walking 18.

The strikeouts must have taken a toll on his arm, because he was never the same after that. His elbow injured for much of the season, Diaz could only pitch in 19 games in 1986, and his ERA was a mediocre 4.26. Released by the Dodgers after the season, he tried to latch on to the A’s the next spring training, but he wasn’t healthy enough to make the team, and he retired. 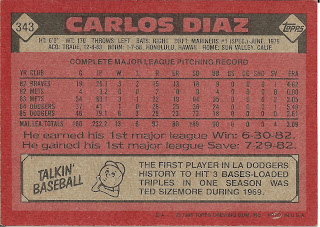 Rear guard: Diaz actually gave up a run to the Astros, before the Braves rallied for four ninth inning runs to beat them.

Now that is an obscure statistic. Ted Sizemore had 5 triples in 1969, his rookie season (he would win the Rookie of the Year award). He would finish with 21 career triples, only a few less than his career home run total (23). Here's that rookie card.

That's probably not Tiger Stadium. I would bet that it's a Vero Beach shot.