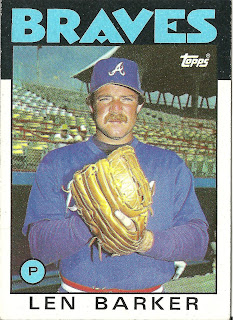 Card thoughts: If you look closely, two mysterious codgers are blending into the white seats over Barker's shoulder in an otherwise empty spring training stadium. I love these cards with the foreground bright and the background dark. It makes the player look positively spectral. In this picture Barker looks like a really, really mad ghost. The "angry" style mustache doesn't help.

The player: Len Barker was a promising young pitcher who by the time this picture was taken had flamed out--by age 30.  Between 1980 and 1982, Barker was one of the top pitchers in the American League, winning 19 games in 1980; 15 more in 1982; and leading the league in sytrikeouts in 1980 and '81. However, Barker always had a relatively high ERA for someone who won so many games, perhaps due to his wildness (he also led the league in wild pitches in 1980). Which makes it even more remarkable that on May 15, 1981 Barker pitched the 10th perfect game in major league history against the Blue Jays in front of about 7,000 chilly Indians fans (game time temperature: 49 degrees). For such a wild pitchers, its remarkable that no Blue Jay even got to three balls in the count: perhaps they wanted to get the game over quickly in such unpleasant conditions.

Barker began to tail off in 1983 with a high ERA of 5.11 when the Braves traded three prospects to get him for the stretch drive of the their division winning season. This was in the era where the Braves made a lot of terrible trades, and two of the prospects they sent were Brett Butler and Brook Jacoby, both of whom became very good players for the Indians. The Braves mistake was compounded when they signed Barker to a long-term contract after the season. But battling arm troubles, Barker would only win 9 more games for the Braves in the next two years, and was released after the season shown on this card.

After his baseball career ended, Barker started a home remodeling and construction company in Cleveland. He's still a bit of a legend there. 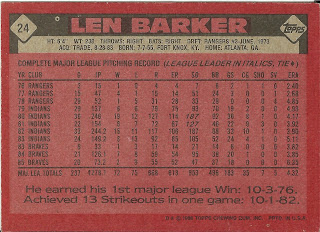 Rear guard: No mention of the perfect game? I know Topps is wedded to these "firsts" but c'mon! For what it's worth, Barker's first win was a shutout on the last day of the season in 1976 against the White Sox. The opposing pitcher? Legendary reliever Rich "Goose" Gossage who was used as a full-time starter for that year only.
Posted by Jets Break Jaws at 8:24 PM