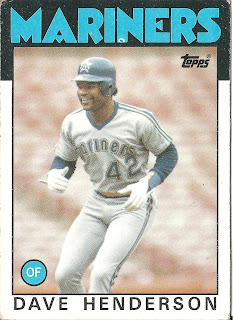 Card thoughts: I don't remember Henderson being this skinny. This shot of him is almost identical to his card in 1985.


The player: Henderson, nicknamed Hendu, is most famous for his post-season prowess as a hitter. I still remember the 1986 ALCS where, hitting for the Red Sox, he hit a 2 run home run off Donnie Moore in the ninth inning with 2 outs. At the time, the Red Sox were an out away from elimination. After the Angels tied it in the bottom of the ninth, Henderson hit a fly in extra innings to send the series back to Boston, who eventually won in 7 games.

Before his Boston heroics, Henderson was a platoon outfielder for the Mariners. Now, the Mariners were terrible in the 80s, and it is a wonder that they didn't see that much talent in Henderson, especially since he was the Mariners first ever draft pick. In 5 full seasons with the club, he generally managed to hit around 15 home runs and drive in about 50, even while never playing over 140 games. His issue was impatience, as he struck out 3 times as much as he walked.

Boston picked him up for the stretch drive in 1986 for four marginal players. Although he hit only .196 in 36 games, in the post season that year he was clutch, as mentioned before.

The next season, there was no place in the Red Sox outfield, even as a platoon player as the team was set with veteran Jim Rice and up and comers Mike Greenwell, Ellis Burks, and Todd Benzinger. After only getting 184 at bats, he was sent to the Giants who were in the process of winning the NL West and no doubt remembered how Henderson could come through in the clutch in a pressure filled situation. While being the middle of many rallies with the Gians, he only hit .238 and wasn't on the playoff roster.

It looked as though Henderson's peak would be his post-season heroics with the Red Sox. But the A's snapped him up in 1988 and, even though he had not been a regular for a couple of years, he was installed as the starting centerfielder, a position he would hold throughout the A's dynasty. Henderson, surrounded by sluggers like Jose Canseco and Mark McGwire, had a career year, hitting 24 home runs, driving in over 100, and scoring more than that as well. At age 29, Henderson had finally lived up his potential, and he continued his slugging ways until 1991, when he made his first, and only, all star team after hitting .340 in the first half of the season.

1991 would be Henderson's last star turn. A knee injury limited his playing time to just 20 games the next year, and when he came back at full strength in 1993, something had been lost, and his average dropped to .220, his lowest in a full season. He finished up as a reserve outfielder for the Royals in 1994.

Despite being a mostly average regular season hitter, Henderson shone when the lights were brightest, amassing a career .298 average in the post-season, with a slugging percentage of .570. He won a World Series ring with the A's in 1989.

Henderson has been a color man for Seattle Mariners radio broadcasts since 2011. He previously held the same role in the TV booth from 1997 to 2006. 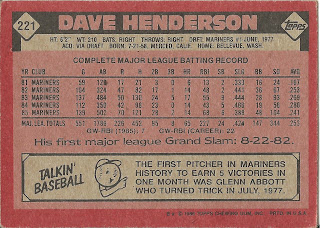 Rear guard: One feature of the 1986 set is that sometimes the backs of the cards are bit washed out looking. This is one of those cards.

Henderson's grand slam (why is this capitalized? Are we German?) was in a losing cause and came off Brewers pitcher Moose Haas. It drove in #92 Al Cowens, Richie Zisk, and Dave Revering.

By the way, there's some bad editing here. It should say "turned the trick." Still, this is part and parcel of Topps odd habit of using sayings on their cards that no one uses in everyday conversation. They must have had some octogenarian ex-sportswriter writing these things.


This date in baseball history:  Astros players Rusty Staub and Ken Aspromonte refuse to play in a game against the Pirates in 1968. The league had given individual teams the decision whether to cancel their games because of the assassination of RFK, and the two players benched themselves in protest of the game being played.
Posted by Jets Break Jaws at 6:49 PM