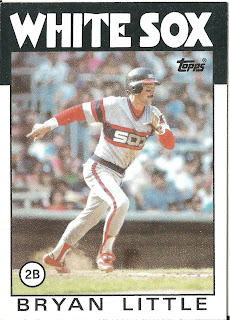 Card thoughts: To my horror, I found that I had lost this card from my original completed set. I had to buy it online. This would be Little’s last card.

The player:  Nicknamed “Twig,” his name fitted his stature, as he only weighed 160 pounds. Little was famous for his bunting prowess, as 27 of his first 100 hits were bunt singles. He was even once knocked down with a brushback pitch for bunting against Joaquin Andujar.

An excellent leadoff hitter in the minors (he generally walked 3 times as much as he struck out), Little hit .260 as a rookie. Although he had a hot start in 1984, he wasn’t able to dislodge light-hitting Doug Flynn from the starting job at second, and the Expos became convinced he didn’t have the stamina to be a starter. So despite his bunting and on-base ability, he was shipped off to the White Sox for Bert Roberge.

With the White Sox, Little didn’t hit much in 1985 (.250), but he still was better than starting second baseman Julio Cruz.  With the White Sox not having much use for Little in 1986, he was sold to the Yankees, where he spent the last 14 games of his career.

After a few more years in AAA, Little turned to managing (much like his brother, former Red Sox manager Grady Little). In three seasons as a manager in the Padres system, a sub .500 record convinced him to turn to other baseball jobs. Note: One of his manager cards in the minors shows him holding a baby (his?).  Little was the first base coach for the White Sox from 1997-2000 and later (his current job), an advance scout for the team. 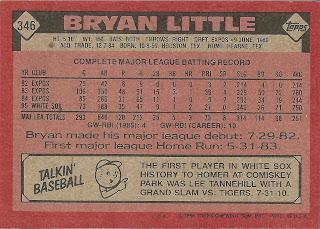 Rear guard: In Little's major league debut, he pinch ran for pinch hitter Brad Mills and scored on a double by Andre Dawson.Lee Tannehill only hit .220 in his career with 3 home runs. In a move that would unusual today, he started out as a third baseman and then moved to shortstop later in his career.

ah, the mere thought of Doug Flynn grieves my Expo-loving soul... Little wasn't exactly a world-beater at the plate, but, as you point out, at least you could count on him to put up a league-average or better OBP. Montreal would've score a lot more runs in 1983-84 if they had let this guy play full time at second...

Looking at the Expos' roster in 1984, I'm wondering if they set some sort of record for keystone hitting futility by tossing Flynn and Angel Salazar out there as often as they did

Man I hate it when a card or two comes up missing from a set that I thought was complete. I thought I had the 1978 set completed, but when I took a closer look, eight cards were missing.