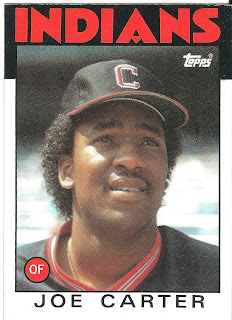 Card thoughts: Carter was not yet a star when this card was issued. But he was already showing promise.

The player: When Dallas Green took over as GM for the Cubs, he turned around the club mostly by raiding his former team (Phillies) for undervalued young players (Bob Dernier, Keith Moreland, Ryne Sandberg), or trading for aging veterans with a few more good years left (Ron Cey, Gary Mathews). He didn’t have to give up a lot of good young players to do so. But acquiring Rick Sutcliffe in 1984 was a different story. In that deal, the Cubs parted with Joe Carter, one of their top prospects. Although Sutcliffe was a great pitcher for the Cubs for many years, Carter would go on to have borderline Hall of Fame career.

Carters first big year was in 1986. Although he would be a consistently good RBI man throughout his career, it was the only time he would lead the league in that category (121). He also hit over .300, had at least 200 hits, and scored over 100 runs for the only time in career. Despite these numbers, he was not chosen for the all star team.

Carter drove in over 90 runs each of the next three seasons with the Indians, but his talent was wasted on what was then a perennial second division team. There were also rumblings that his batting average was too low, and he was a poor outfielder. After the 1989 season, he was included in another blockbuster trade to the Padres. Two of the players who he was traded for were the foundation for the Indians early 90s resurgence (Carlos Baerga and Sandy Alomar Jr.)

Carter’s only season in San Diego was a bit of a disappointment. Although he drove in 115 runs, his OPS dropped to just .681, the lowest in his career and the Padres failed to make the playoffs. So when the Padres got the opportunity, they traded Carter and another Alomar brother, Roberto, to the Blue Jays for Tony Fernandez and Fred McGriff. It was another even deal, as Alomar and Carter turned out to be the missing pieces to win the Blue Jays two straight World Series, while Fernandez and McGriff were all stars with the Padres.

With the Blue Jays, Joe Carter became a bonafide star. His first season back in the American League, he had a career high in doubles (42), and reached the post season for the first time (.263 in the ALCS). The next year was even better, as Carter got a World Series ring, and he emerged as a team leader. He hit two home runs in the series, and caught the final out at first base, on a bunt attempt by Otis Nixon.

That just set the stage for what made Joe Carter a legend in Toronto (his #29 has been retired by the team). Down 6-5 in Game 6 in the 1993 World Series, he hit one of the most dramatic home runs in recent World Series history. The three-run home run was only the second home run to end a World Series, the first of course being the Bill Mazeroski home run in 1960.

Although the Blue Jays did not make the World Series the next two seasons, Carter continued to lead the team in home runs and RBIs. Even in his age 37 season (1997), he was driving in over 100 runs, but his power was declining, and he was allowed to test free agency after the season. Carter signed with the Orioles, but he just didn’t have old fire in him, as he slugged just .424 before being ingloriously traded to the Giants for a minor league player with the stage name of Darin Blood. He retired soon after.

In retirement, he did some color commentary, most infamously with Chip Caray for the Cubs, one of the worst announcing duos in that franchise’s history. 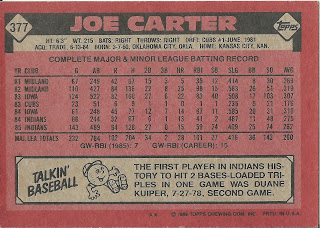 Rear guard: Duane Kuiper is probably better known today as the long-running TV color man for the Giants. He had almost no power (1 career home run), but did hit a lot of triples (29). Those triples were hit at Yankee Stadium in a 17-5 win.
Posted by Jets Break Jaws at 9:56 PM