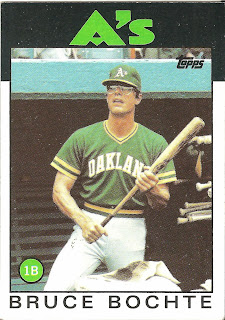 Card thoughts: Squint hard. This card looks almost identical to the #271 Dave Collins card, especially since the players look similar, the picture was taken at the same place, and they are both emerging from the same dugout. As for the glasses, Bochte rarely wore them until the 80s on his baseball cards.

The player: One of the few good players on the early Mariners teams, Bochte’s career reminds me of Mark Grace’s. Both players were high-contact hitters, who sprayed line drives consistently all over the field, hit a ton of doubles, and drove in a lot of runs, despite not hitting a lot of home runs.

A second round draft pick out of Santa Clara University, Bochte made it to the majors in just three years, having hit over .300 at every minor league stop. A below average defender at first, nonetheless Bochte started the majority of games there for the Angels in 1975, due to his superior bat.

After that season, Bochte was a man without a regular position in his remaining time with the Angels, also seeing time in leftfield, rightfield, and designated hitter.  A good hitter with little pop (he never had a slugging percentage above .400, despite hitting near .300 most years), he was eventually traded in early 1977 to the Indians for Dave LaRoche and Dave Shuler. The Indians were a terrible, broke team in those days, so they were unable to keep Bochte, their starting leftfielder, when free agency beckoned.

Signing with the Mariners, Bochte became the team’s first star hitter. The Kingdome was known as a favorable power hitter’s park, and Bochte took advantage in 1978, hitting a career high 11 home runs. But he really turned it on in ’77, when he hit 38 doubles and drove in 100 runs, raising his OPS above .800. Bochte even got a chance to play in his first all star game, in front of the hometown fans.

He remained an integral part of the heart of the Mariners order until 1983, when he refused to play as a personal protest against rising player salaries. Strangely enough, he returned without explanation in 1984, signing with the A’s. After a year to shake off the rust (he hit just .264 and slugged just .345), he had returned to form during the season shown on this card. But Bochte’s unease with the baseball business never really abated, and he ended up retiring after 1986, to replaced by Mark McGwire.

In retirement, Bochte has devoted himself to the ecology movement, and has completely cut himself off from his baseball past, except for talks with former teammate Dusty Baker for some reason. He is the executive director of the Center for the Story of the Universe, which is interested in religious cosmology, or an attempt to explain creation without the existence of God (agnostic). The Center is the research arm of the California Institute of Integral Studies, which seems like a new age college. I'm going to give him credit: At least he's not running a baseball "school." 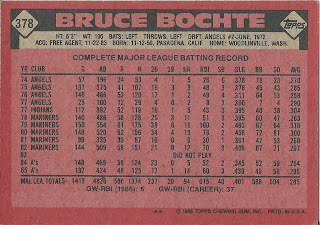 Rear guard: The fact that there is no "club" listed in 1983 is a dead giveaway that something strange was up.
Posted by Jets Break Jaws at 9:41 PM

Bochte was an All -Star for the M's in '79. Looks like he wore athletic wear his entire career!