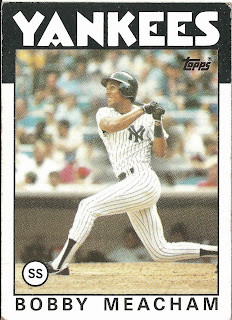 Card thoughts: With the effort shown here, you’d think Meacham was a powerful hitter. But he was uniformly terrible with the bat—except for making productive outs.

The player: Bobby Meacham came to the Yankees with all the hype that usually accompanied position players with that team in the 80s. Like most of them, he never lived up to the hype, and eventually earned the loathing of The Boss.

Meacham was a star at San Diego State University, ending his years there as the all time leader in hits and runs. Wait a minute, you say. Didn’t #10 Tony Gwynn attend SDSU at the same time? Well, yes, but he was known more as a basketball player. It was actually Meacham who pointed him out to the college coach and encouraged him to pursue him for the baseball team.

The Cardinals took Meacham in the 1st round of the 1981 draft, but he didn’t hit or field particularly well in the low minors. Since Ozzie Smith was a fixture at short, Meacham was sent in a minor league deal to the Yankees in 1982. After a year at Columbus (where he hit better), he made it to the majors, where he hit .235 in 22 games. The next year, Meacham “started” the majority of the games at short, although the Yankees really didn’t have a full-time starter there. He hit well enough (.253) and showed enough situational hitting ability (top ten in sac flies, league leader in sacrifice hits), to encourage the Yankees to make him a full-time starter at the position in 1985.

The year was a disaster. In 156 games, despite once again leading the league in sacrifice hits (23), he had an OPS of just .583. It seemed that Meacham’s only talent at the plate was making “productive” outs. And on defense, he was far from stellar, as he was only an average defender at short. On the bases that season, Meacham was part of a legendary boneheaded play when he slipped and fell between second and third, allowing trailing runner Dale Berra to catch up to him at home plate. Carlton Fisk simultaneously tagged them both out for an unusual double play. By the next year, Meacham was once again in a shortstop starting “rotation” with Wayne Tolleson, #283 Mike Fischlin, and Paul Zuvella. He didn’t hit much better (.280 slugging percentage) than the previous year, and much of his time was spent at Columbus.

As more of a utility in fielder in 1987 (Tolleson finally claimed the starting job outright at short), Meacham would have his best season, with an OPS above league average, and a career high 5 home runs. With Meacham finally hitting hit weight, he stayed in the majors the entire 1988 season, only to be limited to 47 games due to injury.

Fed up with his inconsistency and presumed lackadaisical play (especially in the field), the Yankees traded him to the Rangers for Bob Brower. He would be released in spring training, end up playing two more years at AAA (Buffalo and Omaha), and not hit enough to make it back to the majors (.218 and .225). 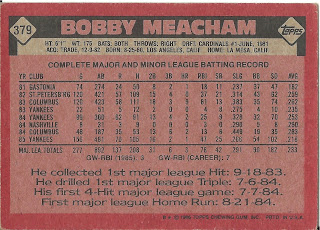 Rear guard: Meacham's first hit was in the second game of a double header when a lot of September call ups played. It drove in fellow rookie #284 Brian Dayett. Meacham later stole a base, and drove in another run (Rick Cerone).
Posted by Jets Break Jaws at 8:58 PM

Meacham was the coach involved in Milton Bradley's infamous argument with umpire Mike Winters—the one where he blew out his knee trying to escape his manager's grip. Meacham testified that in all his years in pro baseball he'd never heard an ump disrespect a player like Winters did Bradley.

My favourite memory of Bobby Meacham is him sailing a throw into the 1st base side stands, from the shortstop's position, in 85.