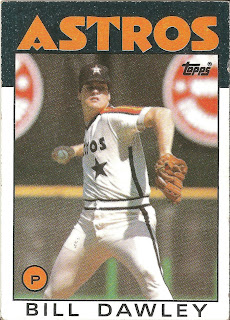 Card thoughts: This was Dawley’s last card as an Astro. And it is an unusual one. The Astros are in their home jerseys, yet the game Dawley is pitching in is not at the Astrodome (note the sun).  I couldn’t remember Dawley at all, but I guess he had a card in both the ’87 and ’88 Topps sets.

The player: Dawley had a long slog through the Reds system. Drafted in 1976, he spent six years as an undistinguished starter in their system, before being sent to the Astros for backup catcher Alan Knicely.

The Astros wisely converted Dawley to a closer, and he made the all-star team his rookie season, recording 14 saves and a 2.82 ERA. In the all star game, Dawley didn’t give up a run in 1 1/3 innings. He was only the third pitcher at the time to start the season in the minors, and play in an all star game. Switching relief roles in 1984, Dawley had his most successful major league season as a long-man, going 11-4 with a 1.93 ERA in 60 games.

Although Dawley would remain a successful relief pitcher the next two seasons, he would never again have the kind of success he had in his first two seasons. Despite a 5-3 record and near league average ERA, the Astros had released him by the time this card appeared in packs, in a salary saving move. The White Sox grabbed him, and Dawley pitched well for the one season he was with the club (his 3.32 ERA was really good, in what was a hitter’s year).

Another trade for a middling backup player ended Dawley up in St. Louis, where he saw his last significant action, posting a high ERA (4.47), and astonishingly high amount of intentional base on balls issued for some reason (11, in 96 2/3 innings). His poor performance, particularly in September, left him off the Cardinals post-season roster.

Dawley never again had a regular major league job, as his short stints with the Phillies (13.50 ERA, 8 games) and the A’s (4.00 ERA, 4 games) will attest. With the Phillies, he was known as the “soft underbelly” of the bullpen, and with the A’s, no one could figure out why he would sign with a team with no openings (he got his chance when the A’s traded Greg Plunk and Eric Cadaret for Rickey Henderson in mid-summer). 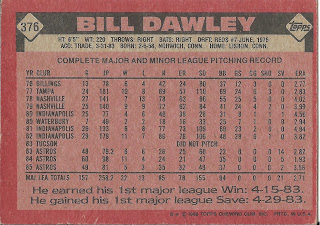 Rear guard: Remember when I said Dawley was one of the few players who ever pitched in an all star game after having started the season in the minors? Well, he was called up so quickly, he never got in a game for Tuscon in '83, despite being on their roster. In fact, Dawley's first major league win was in his debut for the Astros when he finished off a game by going the last three innings of a 7-6 win against the Expos.
Posted by Jets Break Jaws at 9:46 PM