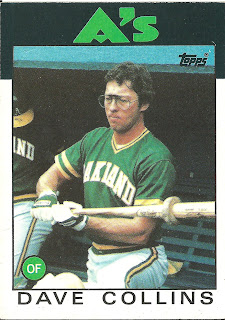 Card thoughts: The huge wire-rimmed glasses just scream 1985 (I had a similar pair that year). Collins is either determined to get a pinch hit at Tiger Stadium, or he’s lining up his bat to whack a batting helmet off the dugout rail. If anyone can tell me who sleepy is sitting on the bench behind Collins, please do.

The player: Switch-hitting Dave Collins had a long career as a fourth outfielder/occasional starter but he never remained with a team for very long. He had one plus tool: blazing fast speed. And that was enough to keep him employed for 16 years.

Collins was drafted by the Angels in the first round of the 1972 draft and made his debut three years later. He split time as the primary left fielder and leadoff hitter with Morris Nettles. Despite his speed, Collins was not a particularly effective leadoff hitter as he rarely walked.

After two years in a platoon situation, Collins was drafted by the Mariners in the 1976 expansion draft. He was the first batter in Mariners history, and also scored the franchise’s first ever run. Despite these feats, Collins hit poorly, only .239, and he was being caught stealing almost 30% of the time.

Shipped to the Reds for Shane Rawley after just one season, Collins was essentially the Reds designated runner in 1978, having the same number of games (102) as at bats. The lack of playing time affected his numbers, and he only stole 7 bases and hit a meager .217. But the Reds decided lack of at bats, rather than talent, was the problem and he got more regular playing time in 1979 and he hit .318. Incumbent starting centerfielder Cesar Geronimo and Collins swapped roles the next year, and Collins responded with his best year to date, making the top ten in batting average (.303), runs scored (94), and steals (79).

Moved to right field in 1981, Collins fielding wasn’t the best. With the acquisition of #224 Cesar Cedeno, there was no longer a place for him, and he signed with the Yankees as a free agent. After hitting a mediocre .253 and being caught stealing about half the time, Collins was involved in one of the many of terrible trades the Yankees made in the 80s. Along with future star Fred McGriff (then a minor leaguer) and Mike Morgan, he was traded to the Blue Jays for Tom Dodd (never pitched in the majors for the Yankees) and Dale Murray (4.73 ERA in the pinstripes).

Installed as the starting left fielder, Collins improved his base stealing percentage and hit .271. His best Blue Jay season was in 1984 when he led the league in triples with 15 (despite having never again, or before, having double digits in triples). His 24 doubles and 44 runs batted in were also career highs.

But the Blue Jays had an ever better left fielder, George Bell, on the horizon, so Collins was traded with Alfredo Griffin to the team you see on this card for Bill Caudill. He could not replicate his 1984 season, and was soon shipped off again, this time to the Tigers. 1986 was the last year Collins would play in over 100 games. His speed was invaluable on a team with a bunch of aging, thumping plodders.

Collins would be on the move gain, playing three seasons as a backup outfielder for the Reds, before playing in 99 games (but with only 58 at bats!) as a reserve first baseman/outfielder for the Cardinals in 1990.

Collins had been the first base coach for the Cardinals (1991-1992), Reds (1999-2000), Rockies (2006-2009), and Marlins (2010). He’s also managed in the minors and coached high school baseball. Presently, Collins works with at risk youth through in the juvenile justice division of Lighthouse Youth Services. 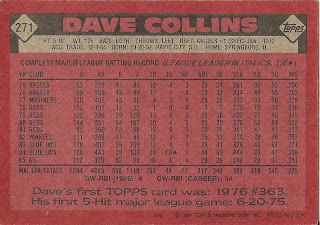 Rear guard: Collins has the same expression on his rookie card, except there a terrible fu manchu mustache surrounds his tight lipped pout.

The game Collins got his five hits was a wild one, as the Angels beat the Rangers 12-11 in 11 innings. In a rare display of power, Collins slugged a double and a triple to go along with his three singles, one of which tied the game in the bottom of the 11th. He also stole a base and was caught once.
Posted by Jets Break Jaws at 10:37 PM

a complete enigma of a person to this day,,was actually living in a small suburb of toronto ont just a couple years ago "getting away from it " now is a first base coach in MLB,,yah he bounced all over the doyle alexander clubhouse disease,,,,still holds for most steals by a blue jay ever