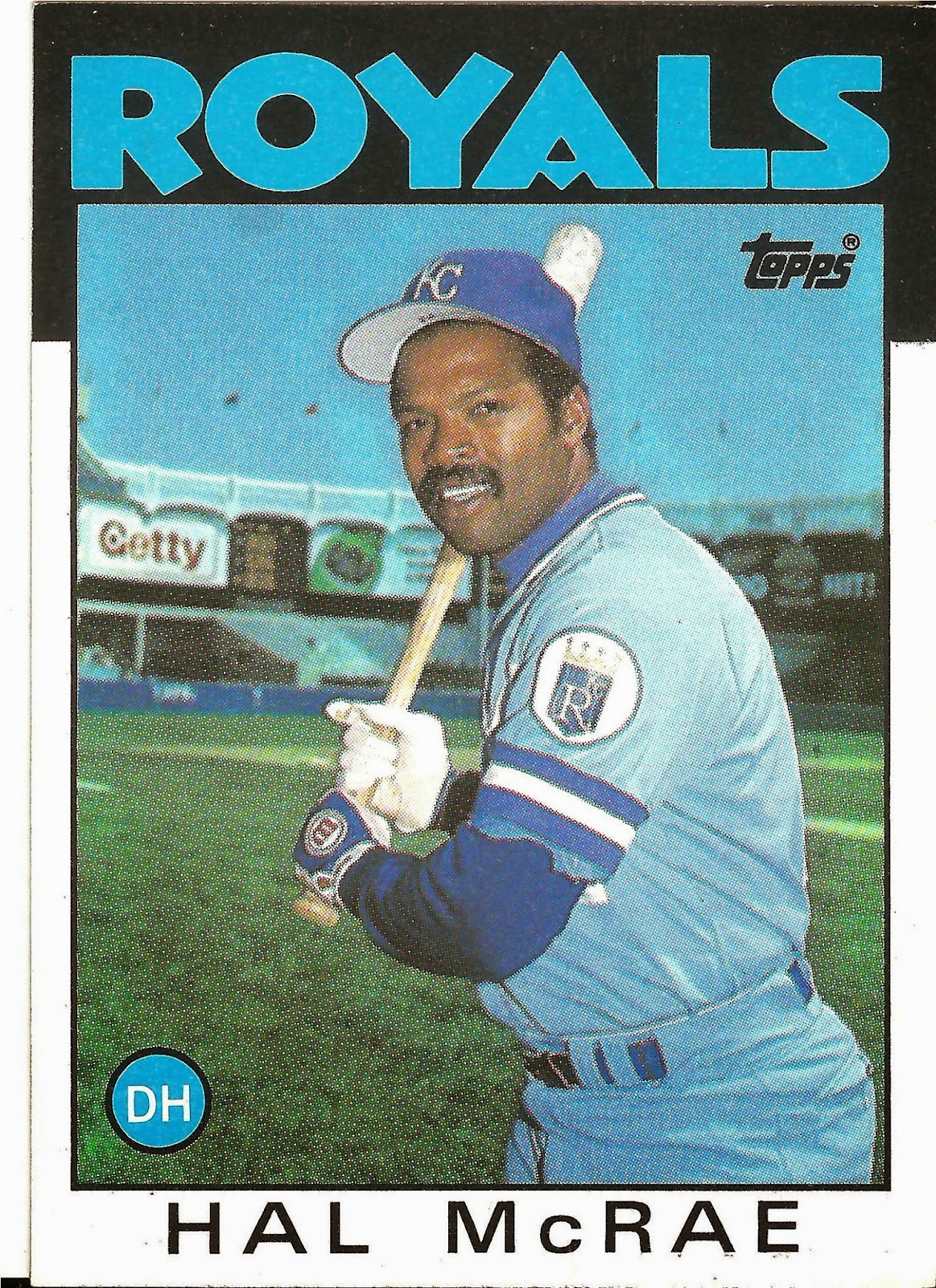 Card thoughts: McRae generally has a happy smile on his cards, although he’s been known to get a little surly.

The player: The Big Red Machine had so many great hitters in the 70s, even their rejects became stars for other teams.

McRae started out as a second baseman, but a broken leg in winter ball sent him to the outfield. Formerly a speedster, he was now just adequate in the outfield. The injury leads to a story where his manager, Dave Bristol, shamed McRae by pointing out that Harry Carey was doing his job (across the field, interviewing players), despite getting hit by a car in the off season, while McRae was still in a cast.

Despite motivating McRae to get back on the field quicker, he still could not break into the starting lineup. His continual moaning about a lack of playing time got him a trade to the Royals after the 1972 season, which turned out to be his salvation. The Royals at the time were a down-and-out former expansion team with plenty of opportunities for a player like McRae. Especially since the American League had just instituted the DH rule.

An aggressive player, McRae ran hard on every hit, perhaps making up for the speed he was robbed of by the broken leg. He would go so hard into second, that a new rule requiring players to slide into second base on a double play attempt was instituted because of him. Also, McRae’s defensive shortcomings were masked in the American League, as he spent most of his time DHing.

McRae first really big year was 1976, when #300 George Brett barely edged him out for the batting title. He still ended up leading the league in on base percentage (.407) and OPS (.868). But there was some controversy on how Brett won the title. The hit that edged him out was an inside-the-park home run Twins outfielder Steve Brye misplayed.  McRae began making obscene gestures to the Twins dugout, accusing them of intentionally giving Brett the title because they were racist.

McRae sacrificed some his batting average for power, and he slugged above .500 for the first time the following year, on the strength of his league leading 54 doubles.

Although he would have another good season in 1983, McRae was aging, and by the time this picture was taken, he was splitting DH duties with a similarly ancient Jorge Orta. Although he started in the ALCS at the end of the 1985 season, in the World Series the DH wasn’t being used that year (it used to alternate every other year), so he was hitless in three pinch hit at bats.

McRae finished his career as perhaps the best all-time designated hitter up that point—at least until Edgar Martinez came around. He appeared in the third most games all time in that role, and ended up hitting .294. And all of his DHing prepared him to be a hitting coach with the Expos, Reds, Phillies, and Cardinals. He also managed the Royals (1991-1994), where he had one winning season, finishing third in 1993, the year of this famous rant. McRae went on to replace original Devil Rays manager Larry Rothchild for two seasons (2000-2001), when that club was perpetually in last place.

McRae's son, Brian, was a solid major league player for over a decade. 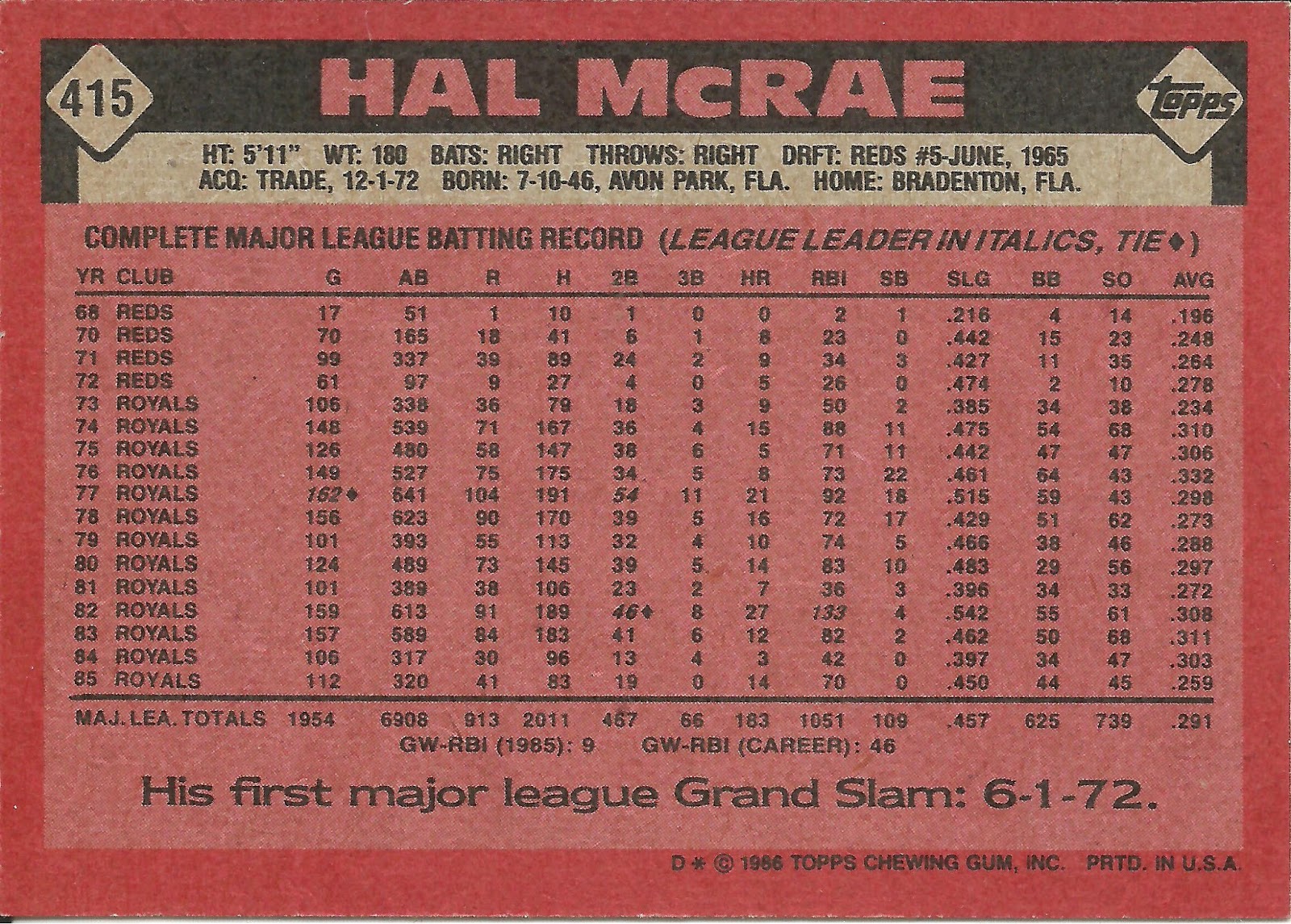 Rear guard: McRae's first grand slam came off of Astros starter Jerry Reuss. He was pinch hitting for pitcher Ed Sprague and it drove in a litany or Reds stars: #195 Dave Concepcion, #85 Tony Perez, and Dennis Menke.
Posted by Jets Break Jaws at 10:10 AM