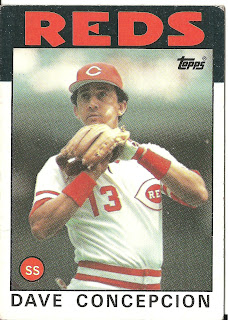 Card thoughts: The Reds really had the old Big Red Machine gang back together for one last fling this season: Dave Concepcion was joined by #1 Pete Rose and #85 Tony Perez. Concepcion was the only one of three that never left the Reds.
The player: A case can be made for putting Concepcion in the hall of fame. Before Ozzie Smith, he was the best shortstop in the National League, and was a better hitter. Concepcion was very much of his time: In the days when many parks had artificial turf, he could play deep at short, perfecting throws that bounced on the turf to give him better range. Concepcion played all of his 19 years with the Reds.
Concepcion was only a reserve shortstop the first year the Reds went to the series, in 1970. He did play in 3 World Series games, and hit .333. The next two seasons, Concepcion fielded well, but hit poorly, hitting just above .200 both seasons, while driving in about 20. That all changed in 1973, when he made the first of 9 all star teams. Concepcion's batting average jumped 80 points, and he showed a bit more power.
Concepcion was even better in 1974. Getting into 161 games, he doubled his home run output to 14 and drove in 82 runs. Concepcion also won the first of four straight gold gloves. The next two seasons, the Reds won the World Series and he hit around .280 each year. In the post-season both years, he had his ups and downs, hitting around .400 in one series, and .200 in another.
Concepcion consistently drove in about 60 runs from 1977 to 1981. He had his first .300 campaign in 1978, and a year later had his second power surge, hitting 14 home runs and driving in a career high 86. In 1981, he was 5th in MVP voting. The next year, in his last all star game, Concepcion was the MVP, after hitting a home run to put the NL ahead for good in the second inning.
In 1983, '84, and '85, Concepcion's age began to catch up with him. There were no more .300 seasons, and he began to resemble the light hitting shortstop he had been a decade before. The season shown on this card would be Concepcion's last as a regular shortstop; he would mentor hall of fame shortstop Barry Larkin the remaining three years of his career.
In his final season, Concepcion pitched an inning and a third in a Reds' blowout loss in 1988 giving up 2 hits, striking out 1 (Franklin Stubbs), and giving up no runs.
Concepcion finished his career with the 15th best range at shortstop all time, as well as 2,300 hits. 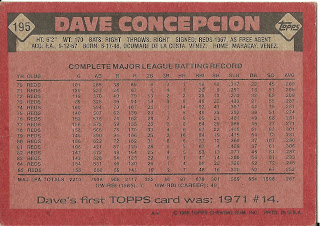 Rear guard: Concepcion sure had some big ears as a youngster on his first Topps card.

This date in baseball history: In 1974, Hank Aaron passes Babe Ruth as the all time home run king.
Posted by Jets Break Jaws at 10:35 PM