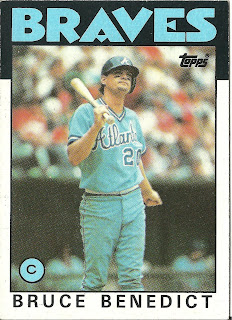 Card thoughts: Much like future teammate Dion James, Benedict is searching for a pop-up. He looks more bemused and bored than shocked. I'm still in awe of how many mid 80s teams adopted the baby-blue road uniforms. Really ugly.

The player: Benedict's defense made him an all-star in 1981. He led the league in assists with 73 and caught stealing with 48 that year, following it up in 1982 with a league leading .993 fielding percentage. Benedict didn't hit much in his first few seasons as the Braves' regular catcher, clocking with averages of .225, .253, .264, and .248 from 1979 to 1982. He would have his greatest offensive year in the Braves' division winning year of 1983, hitting .296 while driving in and scoring 43 runs. He's interviewed at the 4:00 mark in this clip after the Braves clinched the division. (I really dig this celebration; there's kids and wives (or mistresses) in there, and even some weird chicken mascot is getting loaded . . . none of those wimpy goggles/tarp celebrations orchestrated nowadays). He was named to his second all-star team that season, although as in 1981 he did not appear in the game. He hit a career low of .223 the next year, as was relegated to backing up catching warhorses Rick Cerone, Ozzie Virgil, and Jody Davis for the rest of his 12-year career, all of which was spent with the Braves. His nickname was "Eggs," and the Fulton County Stadium crowd used the time-honored cheer "Bru-u-u-u-ce" to greet him when he came to the plate.

Benedict managed for the Atlanta Braves single-A teams and was a major league bench coach for the New York Mets from 1997-1999 after he stopped playing. He currently scouts for the St Louis Cardinals, referees NCAA Division I basketball games, and runs the Bruce Benedict Baseball Academy in the Atlanta suburbs. 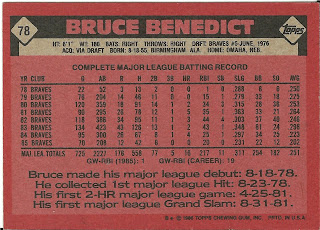 Rear guard: Bruce Benedict came into his first games as part of a double switch, replacing Joe Nolan defensively, and pitcher Max Leon in the batting order, batting first. He also got his first major league hit that day off of Cardinals pitcher Tom Bruno NOT on 8-23-78 as indicated by Topps. Who worked in the Topps research department this year? This is the second error I've found.
Posted by Jets Break Jaws at 9:03 PM

I never knew Bruce Benedict had such a squeaky voice.