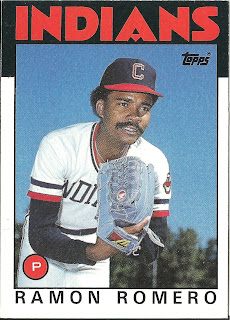 Card thoughts: Due to the lighting, I believe this picture was taken around the same time as the #172 Jerry Reed picture. Besides that, this is very weird angle for a picture. Romero is just looming there, with a goofy grin and a big blue (!) glove. This is both Romero’s rookie card and only Topps card.

The player: Romero took six years to get to the majors, and then retired only one year after reaching his goal. Looking at Romero’s minor league statistics, it’s hard to have any explanation other than sheer desperation by the Indians that he ever got to the majors. Although he was lefthander, he was extremely thin at 6’4” and 170 lbs.

Used mostly as a swing man in the minors, he played for 13 different minor league teams before his one game trial with the Indians in 1984. Romero split his time relieving and starting during the season shown on this card, and was ineffective at both, sporting a 2 and 3 record with a stratospheric 6.58 ERA. He walked as many (38) as he struck out.

The Indians, disgusted with his performance, actually found a sucker (I mean a taker) for his services. He was traded along with fellow disappointing starter #9 Roy Smith to the Twins for reliever Brian Oelkers. Romero, no doubt missing the Indians organization with which he had spent his entire career, pitched only one more professional season in the minors before retiring. 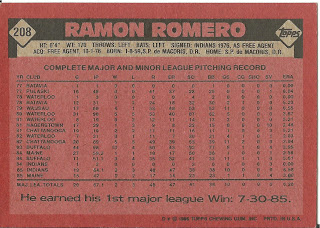 Rear guard: Very rare to see the small font for a player who barely played in the majors. Romero's first win was in the second game of a doubleheader against the Yankees. He pitched 7 2/3 innings, and, besides giving up 2 solo home runs, pitched just good enough to get the win, striking out 3, walking 1, and giving up 4 hits.

This date in baseball history: 2 no-hitters and 1 perfect game were hurled on this date. Cy Young pitched the perfect game (the first in American League history) in 1904; Ernie Koob (1917) and Bo Belinsky (a rookie) (1962) were the pitchers who pitched no-hitters.
Posted by Jets Break Jaws at 4:04 PM