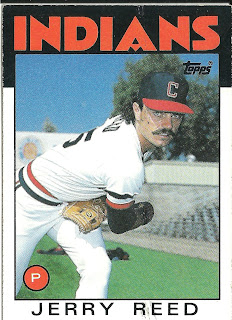 Card thoughts: This is Jerry Reed’s rookie card.
Even though we’re in the modern era, with the ability to take action and in game shots, it’s nice to see a card with the pitcher doing the “follow through” pose down the right field line of some spring training field. Pretty much every pitcher card from the 60s either had the pitcher with his arms over his head, or doing this goofy follow through.And there's either a sleeping teammate behind Reed, or the equipment manager left some junk on the field.
Also, for years I thought Jerry Reed had a mole on his cheek. Turns out, it was just the black ink from the team name background bleeding into the picture.
The player:  I’ve spoken a lot about how deep the Dodgers and Phillie systems were in the early 80s. The minors were so deep for these guys, that they had the luxury of trading away future major leaguers (and sometimes, future stars), and still being consistent pennant contenders. Reed is a product who excelled in the Phillies system, consistently posting ERAs below 2 in the low minors. He never really got a chance with the Phillies, appearing in 11 games over two seasons with the team.
Reed was traded to the Indians in 1982, along with #9 Roy Smith for John Denny. But Reed never got much of a chance with the Indians either until the season shown on this card, where for the first time he spent the majority of the year in the majors. He rewarded the Indians with a solid, if not spectacular, 8 saves and a 4.11 ERA both as a starter and reliever.
Reed was released in spring training the next year, but was quickly scooped up by the Mariners, where he spent the next 5 seasons, and where he had his best seasons. With the Mariners, he went 13-11 with a 3.49 ERA with 8 saves over 311 2/3 innings. Reed’s best individual year was 1989, when he went 7-7 with a 3.19 ERA, and pitched a career high 101 2/3 inning.
Despite having a career year the previous season, he was released by the Mariners in 1990 after having a poor April. He finished out the year, and his major league career, with the Red Sox. 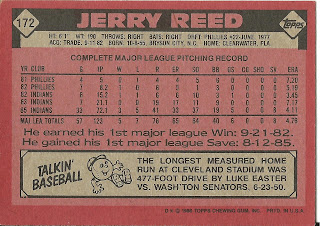 Rear guard:  Reed's first save wasn't easy: He had to pitch 4 innings in relief of Curt Wardle and he gave up 2 runs to the Orioles on home runs by #147 Larry Sheets and Wayne Gross (coincidentally, the next card reviewed on this blog).


Luke Easter spent many of his prime years in the Negro Leagues, where he was a feared power hitter, and second only to Buck Leonard as the best first baseman in that league's history. Easter didn't make it to the majors for good until he was 34, but he hit over 25 home runs and drove in over 90 runs the three seasons he was the Indians regular first baseman. Easter finished his career with 174 home runs. Tragically, Easter was murdered in 1979 in a payroll robbery while working as a union steward.

This date in baseball history: The first ever Collective Bargaining Agreement was signed between the players and owners in 1968. It established a minimum salary of $10,000 ($65,000 in today’s dollars) and a formal grievance procedure.
Posted by Jets Break Jaws at 7:01 PM