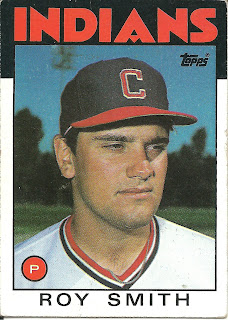 Card fact: This Roy Smith's second Topps card. He'd be mostly in the minors the next few years and wouldn't have another card until 1990.

Card thoughts:  Roy Smith rarely looks happy on his baseball cards and this is no exception. Topps took a lot of these types of pictures in 1986, where the player glows against a darkened background (most dramatically on some Expos cards).

The player: Smith was a decent AAA-type starter that never saw much success in the majors. He originally showed a lot of potential though, and was traded to the Indians from the Phillies in 1982 with two other minor leaguers for John Denny. This was a steal for the Phillies, as Denny won the Cy Young Award the year after the trade. His best year was with Minnesota in 1989 when he went 10-6 with a 3.92 ERA.

After his playing days were over, he became a scout for the Pirates and Blue Jays. 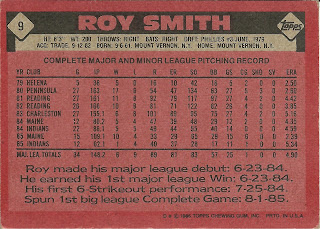 Rear guard: Smith won his first major league start and apparently his only win in 1985 was a complete game win. And generally a "six strikeout" performance isn't something to get too excited about.