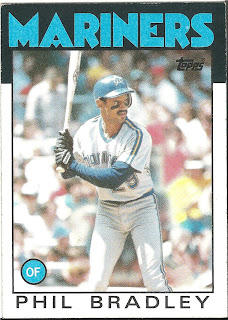 The player: A two sport star at the University of Missouri, Bradley briefly considered quarterbacking for the NFL, but he got a better offer from baseball where he was drafted in the 3rd round by the Mariners.

In the minors, Bradley had little power but hit for a high average. This continued in his first two years in the majors, when he didn’t hit a home run, and his slugging percentage was in the mid-.300s. That all changed in 1985 when Bradley exploded for 26 home runs. He reached the top ten in the league in batting average (.300), slugging percentage (.498), WAR (4.6), hits (192), and total bases (319), and he was one of the best fielding leftfielders as well. In today’s game, Bradley would be suspected of using PEDs, but in this case he just discovered how to drive the ball a bit later than usual. He made the all star team on the strength of these numbers and struck out in his only at bat.

Bradley would never again reach the power numbers he put up in 1985, but he had other tools (such as speed) that made him a force in the middle of the Seattle lineup for the next two years. He never hit below .295 in any full season with Seattle, and managed to score a career high 101 runs in 1987 while stealing 40 bases. Despite the fact that he was, along with Alvin Davis, the core of their lineup, the Mariners traded him to the Phillies after this season for Glenn Wilson and Michael Jackson. The reason was that Bradley had won a big arbitration case before the beginning of the 1987 season, and the Mariners felt they couldn’t afford to keep him.

The trade was largely considered a bust in Philadelphia. Although Bradley scored 77 runs, and hit a respectable .264 (he also led the league in being hit by a pitch 16 times), the Phillies expected him to recreate the 1985 season, which he could not do. Almost exactly a year later, Bradley was shipped off to the Orioles where he raised his OPS over 50 points (mostly on the strength of an increase in triples) in his last season as a regular major leaguer. After a trade to the White Sox at the 1990 trade deadline, Bradley hit only .226. He was not offered a contract after the season and elected to go the Japan. He never made it back to the majors.

Soon after retirement, Bradley coached baseball at Westminister College in Missouri and even taught courses in sports history. He has advised the MLBPA in recent years. 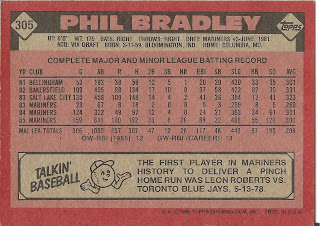 Rear guard: Leon Roberts was in the midst of his best season when he launched his pinch home run. He hit 21 other home runs that year, and also drove in 92 while hitting .301. He would never again have a season like that (much like Phil Bradley! Nice coincidence Topps!).

Roberts actually replaced starter John Hale in the 4th inning in that game after the former was injured. Here's Leon Roberts' card from that season.
Posted by Jets Break Jaws at 3:05 PM