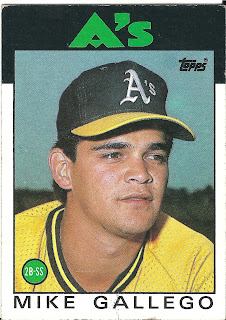 Card thoughts: Gallego looks like he's 14 in this picture.

The player: Gallego’s career was shows the value of being a good fielding utility infielder: Hang around long enough, and you might get a starting job. A very small man by baseball standards (standing just 5’8” and weighing in at 160 lbs), Gallego had a hard time driving the ball until later in his career.

Gallego was just starting his major league career when this card was issued. But he almost didn’t make it, as he was diagnosed with testicular cancer as a 22-year-old minor leaguer. At this point in his career, he generally appeared in the late innings at shortstop or second base. He only played 10 entire games in 1985, all at second. The reason was probably his lack of extra base power and .208 average.

That average kept him in the minors for most of the following season, but his .701 OPS got him back to the majors for good by 1987. As part of the A’s dynasty of the late 80s/early 90s, Gallego’s role was generally to sacrifice guys over, or make productive outs, so the big RBI men on the club (Jose Canseco and Mark McGwire) could knock them in. He gained his first starting role in 1989, as he supplanted Walt Weiss at the position while the latter worked through his sophomore jinx.  Manager Tony LaRussa started him in the ALCS, but opted for Weiss in the World Series. Gallego hit .273 in the ALCS.

With Weiss back starting at short the following year, Gallego shifted back to a utility role, although he led the league with 17 sacrifice hits. With the collection of veterans the A’s had been starting at second the previous few years gone by 1991, Gallego was named starter at that position and he had his best season, reaching highs in games (159), runs (67), hits (119), home runs (12), and OPS (.712).

On the strength of that season, he signed a big three-year contract with the Yankees for over $5 million. But other than the 1993 season, when he set a career high with 51 RBIs, he never came close to 1991 again.  A broken wrist after being hit by a pitch in 1992 limited him to around 50 games, and he lost playing time to Randy Velarde in 1994.

After a year back with his original team (Oakland), Gallego signed with the Cardinals for the 1996 season. He set a dubious record that year, as he had the most straight hits without an extra base hit as a non-pitcher in the modern era.

Gallego played his last game July 23, 1997. He is currently the third base coach for the A’s, and can be found on twitter. 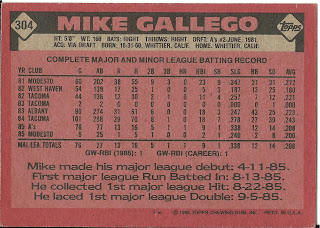 Rear guard: All the highlights are from the season just ended when this card was issued. Gallego broke camp with the A's, and made his debut subbing for Alfredo Griffin at short in the late innings in a blowout. Notice it would be another 4 months before he drove anyone in (it was Steve Henderson, and came in the 8th inning after he entered the game, once again, as a defensive replacement for Alfredo Griffin.)
Posted by Jets Break Jaws at 8:38 PM

I always think of the SNL sketch when Chris Farley played the bratty son of Rudy Giuliani and started screaming Gallego's name...