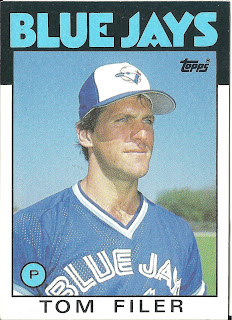 Card thoughts: To my surprise, there exists a Tom Filer rookie card in a Cubs uniform in the 1983 Topps set (with a goofy, gaping look on his face). He would not have another card until the 1989 set where once again, he’s doing something weird with his mouth.

The player: Filer went through three organizations before ending up on the Blue Jays division winners in 1985.

Drafted by the Yankees in 1978, he had two really good years as a starter in that organization, but was left unprotected in 1980, and he was snapped up by the A’s who did not impress them enough to keep him: Filer was returned to the Yankees at the end of spring training in 1981.

All the moving around must have effected Filer, because after one start at Columbus (where he was bombed for 5 runs in 3 innings), he was sent to the Cubs for backup catcher Barry Foote, who did not have a hit in his first 26 plate appearances. Filer lost his control, and despite consistently terrible performances at AAA from 1981-1984, he was given 8 starts in 1982 with the parent club. Filer’s 5.53 ERA in those starts convinced the Cubs that he was only fit to be an insurance policy at AAA.

With a (seemingly) strong rotation emerging from the 1984 division winning team, he was deemed expendable by the Cubs and he was not resigned after becoming a six-year free agent. Filer then signed with the Blue Jays, and performed well in the minors, earning him a call up in July, replacing an injured Jim Clancy. All Filer did is go unbeaten in 7 decisions (9 starts and 2 relief appearances). However, appearances are deceiving because he pitched poorly in a third of those starts, pushing his ERA up into the high 3’s (high in that small ball era). In another down note, Filer went down with a tender elbow near the end of the season (the third stint he had spent on the DL).

The elbow injury flared up again spring training in 1986, causing Filer to miss the entire season. He never again pitched for the Blue Jays, becoming the first player in history to leave a team while being undefeated in over six decisions.

Filer hooked up with the Brewers in 1988, where he spent a couple of years as their fifth starter, generally pitching ineffectively. He later spent time with the Mets and Cubs, mostly pitching at AAA for those clubs. At 35, Filer retired from pro ball after a 2-10 record at AAA Norfolk (Mets). He is now a pitching coach for the AAA Indianapolis Indians. 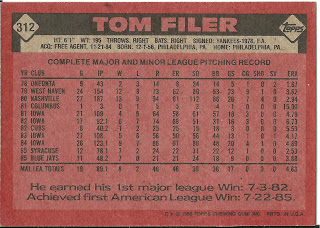 Rear guard: His first win was his only one for the Cubs. It was a great game, as he gave up no runs and beat #150 Joaquin Andujar in a pitcher's duel.
Posted by Jets Break Jaws at 10:55 PM

That's quite a feat, having a card every third year.

I knew about his '83 card. And I have his '86 and '89 cards. But I don't think I ever made the connection that they were all the same person.