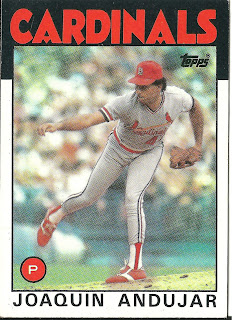 Card thoughts: That's a pretty awkward follow through, but apparently Andujar was a good fielder at his position.

The player: Andujar was a mercurial, eccentric pitcher with a world of talent, but an inability to harnass it except for three exceptional seasons. He referred to himself as "one tough Dominican." As an Astro from 1976 to 1981, he was a .500 pitcher, sporting league average ERAs. Despite this, Andujar made all star appearances in 1977 and 1979, probably because he was the best of a bad lot--all star rules state that each team, no matter how bad, must have a representative. Once he came to the Cardinals, he became a top flight pitcher, yet his ERAs still hovered in the 3.50 range. Featuring a devastating fastball and curve, to go along with a slider, it all came together for Andujar in 1982 when he went 15-10 with a 2.47 ERA, good for 3rd in the league. He also started, and won, the deciding 7th game of the World Series, despite pitching in considerable pain. Andujar went seven innings, giving up 3 runs and 7 hits, while striking out only 1.

His 1983 season, however, was a disappointment. Andujar went 6-16 and had the highest ERA of his career at this point, although he still pitched over 200 innings. But the next season, he bounced back in a big way and won the Comeback Player of the Year award. Andujar was 4th in the Cy Young voting, compiling a league leading 20 wins (against 14 losses). He also led the league in shutouts with 4, and innings pitched with 261 1/3. Andujar won his only Gold Glove that year as well. Despite these gaudy numbers, his ERA was not great for the era a 3.34. His 20 wins were more of a function of out of 38 starts, he had a no decision in only 4 of them.

The season represented by this card (1985) would be a watershed year for Andujar, and here he is discussing his expectations at the 3:58 mark. He won 15 games in the first half of the season, with baseball people believing he had a chance to win 30. But the second half of the season, he went 6-9. Andujar's amazing first half led to him being selected to the all star game. But he refused to go, since he wasn't selected to start, a petulant action that unfortunately foreshadowed the rest of the season. More trouble came to Andujar as a result of the Pittsburgh drug trials. Former teammate Lonnie Smith testified that Andujar was a habitual cocaine user, and often scored for him when he was in St Louis. As a result, Andujar was initially suspended for the 1986 season, which was later reduced to community service.

Andujar was a mess in the playoffs that year, continuing his second-half woes. He went 0-1 in the NLCS with a 6.97 ERA. He was even worse in the World Series, losing his only start by giving up 4 runs in 4 innings in Game 3. He got into even worse trouble in Game 7. After being sent in for mop up duty as the Royals had built a commanding 9-0 lead, Andujar got ejected for charging home plate umpire Don Denkinger, who he felt blew a strike call to catcher Jim Sundberg. (As a side note, part of the beef was because Denkinger had infamously blown a call at first the night before, which the Cardinals felt cost them the series). For that action, Andujar was suspended for 10 games to start the next season.

Tiring of Andujar's antics, alarmed at his drop off in effectiveness in the second half of the 1985 season, and worried about the whole season suspension (still in effect at this point), the Cardinals did the unthinkable and traded a 21 game winner to the A's for catcher #148 Mike Heath (discussed on this blog a flew days ago) and pitcher Tim Conroy, both of whom did little for the Cardinals. Andujar's career also collapsed. He went 12-7 the first year for the A's as he battled injuries, but the next season he could only start 13 games and went 3-5 with a 6.08 ERA. All of the seasons averaging 8 innings a start had finally caught up to Andujar. After a year back with the Astros where he went 2-5 as a starter and reliever, Andujar attempted to make a comeback with the Expos in 1989, but he didn't make the club.

Andujar's most famous quote is "There is one word in America that says it all, and that word is, 'You never know." 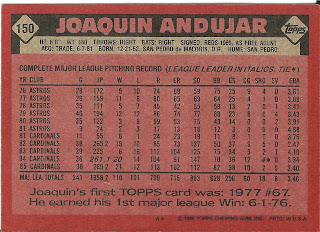 Rear guard: Andujar's rookie card can be seen here. His first win was a complete game victory against the Reds when he outdueled Pat Zachary 2-1. He walked 5 while striking out only 1, but he only gave up 2 hits.
Posted by Jets Break Jaws at 1:19 PM