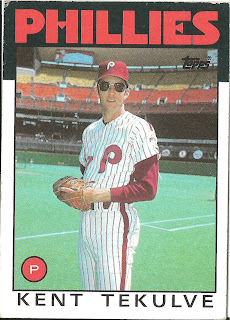 Card thoughts: You just don't see players sporting these kinds of shades anymore. Aside from that, you can see how tall and lanky Tekulve was, which made his sidearm delivery so effective. This was Tekulve's first base card in a Phillies uniform.

The player: Due to his submarine style of pitching, Tekulve was extremely durable, tying a major league record by appearing in over 90 games three times (he was the oldest to do so at age 40). His three saves in the 1979 tied the record (he tied fellow Pirate Roy Face). It has since been broken. Tekulve was a ground ball pitcher, and threw a sinking fastball most of the time. He also had a slider he would "show" a batter.

Tekulve is unusual in his era in that he never started a game in the majors. He was not treated well originally by the Pirates. Undrafted, despite a stellar college career, the old school scouts through he ran weird, so they wouldn't let him pitch with the other players during a tryout at Forbes Field. As made famous by the book "Moneyball," the lanky Tekulve did not look like a baseball player. But he was signed anyway after he had a private pitching session after everyone else had left.

The team still didn't have much confidence in him. In 1970, while in the minor league camp, he and Bruce Kison were told to stop throwing sidearm. Fortunately, both ignored the advice. He came up for good with the Pirates in 1975, and had an ERA below 3.5 for pretty much the rest of his 16-year career. Tekulve's first really great season as a reliever came in 1977 when he went 10-1 in relief. The Pirates had veteran Goose Gossage on the club that season, so Tekulve still wasn't finishing most games. But with Gossage gone the following season, Tekulve began to get more work.

Did he ever. Pitching in a league leading 91 games in 1978 (135 innings pitched), Tekulve saved 31 games; the next year, he pitched in 94 games (again leading the league) and saved another 31. To show how undervalued relievers were back then, he didn't make the all star team either of those years. However, he did get a World Series ring in 1979. He certainly earned it. He saved three series games and pitched in five. The World Series made Tekulve famous. He was mobbed at a local department store by autograph seekers while trying to buy diapers.

Perhaps because the he pitched an extra seven games in the post season (which put him over 100 for the year), Tekulve had an off year in 1980, going 8-12 with a 3.39 ERA, the highest in his career. But he still made the all star game, perhaps as a makeup for all the snubs in the seventies.

He was back to his old, effective self in 1981, and continued to pitch extremely well for the Pirates until the season represented by this card. The Pirates in 1985 were a long way from the great days of the 1970s, and the new ownership didn't want to pay the salaries of many of the high priced veterans on the team. Also, Tekulve started complaining that he wasn't used enough in save situations. So they traded him--after he had given up seven runs in three April innings--to the Phillies for Al Holland, who had led the Phillies in saves the year before but was not in the class of Tekulve.

With the Phillies, Tekulve once again excelled, posting a 2.99 ERA after the trade and saving 14 games. He relinquished the closer role to Steve Bedrosian the next year, but still kept busy, pitching in 73 games in 1986, and 90 in 1987.

Now over 40, he pitched one more season with the Phillies before being released. He pitched 37 games for the Reds in 1989 before retiring. He worked in the broadcast booth for the Philles from 1991 to 1997; managed in an Independent League a few years; and finally worked as an advance scout for the Pirates. He does some analysis post-game for the club as well. 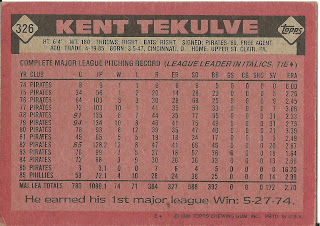 Rear guard: Tekulve's first win came against the Padres after he blew a save by giving up two runs in the eighth and ninth innings and allowing two inherited runners to score. He was saved when Rich Hebner hit a two-run home run in the bottom the ninth to win it for the Pirates (this goes to show how little wins matter for a reliever).
Posted by Jets Break Jaws at 12:59 PM