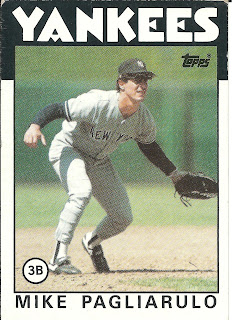 Card thoughts: For some reason, I didn’t think that Pagliarulo had a card in this set, despite being the Yankees starting third baseman. But it's good that it exists, as it is one of the rare infield fielding cards in the set. By the way, the “g” is silent and Mike’s last name is pronounced pah-li-a-ROO-lo.

The player: Pagliarulo had excellent power, but he rarely hit for a high average because of his propensity to swing at bad balls. So once his power left him, he had little to fall back on the offensive side. Luckily, he was a skilled defender at third who was in the top ten in fielding percentage three times.

After a rapid rise through the minors, Pagliarulo was called up to replace struggling veteran Toby Harrah at third in 1984. He quickly became a force in the middle of the lineup, blasting 19 home runs in 1985, 28 in 1986, and a high of 32 in 1987. Unfortunately, despite the power, Pagliarulo’s average dropped each year. By 1989, he was hitting below .200 before he was dealt to the Padres for Walt Terrell. Pagliarulo hit about the same the rest of the year.

Missing the cozy right field porch at Yankee stadium, Pagliarulo hit just 7 homers in 1989, but he raised his average above .250 for the first time in his career. He followed that up with a season almost as good as the year he hit 32 home runs. Contributing mostly with his glove, he helped the Twins win the World Series. His contribution included a two run home run Game 4.

After a down year in 1992, Pagliarulo played for both the Blue Jays and Orioles in 1993, hitting over .300 for the first time in his career. This attracted the attention of the Japanese League, whose Seibu club signed him to a one-year contract. Returning to the States as a backup third baseman for the Rangers, he played in 86 games. He retired in 1995.

In retirement, Pagliarulo has coached high school baseball and tried to start a baseball consulting business, which has some kind of proprietary formula for scouts to use when evaluating players. Here’s an interview where he expounds upon his evaluation methods.

Pagliarulo was hired recently as the hitting coach for the AAA Indianapolis Indians. 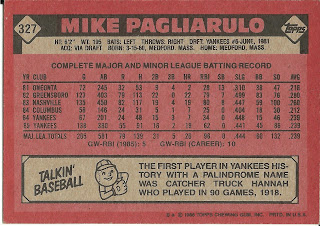 Rear guard: All of the great Yankees of the past, and they picked the first player with a palindrome name? Okay. Good ol' Truck Hannah. He was a 29-year old rookie when he joined the pre-dynastic Yankees. In three seasons, only in 1918 was he the starting catcher. The rest of the time, he backed up Muddy Ruel. He had drove in 66 runs and hit .235 in those three years.
Posted by Jets Break Jaws at 9:33 PM