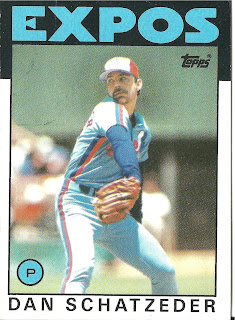 Card thoughts: You can see the deception in Schatzeder's motion that made it so difficult for lefties to hit him.

The player: Dan Schatzeder was a man pitching at the wrong time. He would have had a lucrative career in today’s game, pitching in about 60+ games with only 40 or so innings pitched as a one-lefty-batter relief specialist. But in Schatzeder’s day, relievers were expected to pitching at least one inning, and generally pitched 2. Despite having four major league quality pitches, Schatazder was never able to consistently get righthanders out.

Originally a starter, he grew up in Elmhurst, Illinois (a wealthy suburb of Chicago) and was drafted by the Expos in 1976. He made his debut just one year later, and pitched fairly well as a starter throughout the late 70s, never posting an ERA much above 3. After going 10-5 with a 2.83 ERA (3rd in the league) in 1979, Schatzeder was traded to the Tigers for aging speedster Ron LeFlore (LeFlore would lead the league with 97 steals in 1980, and then depart a year later for the White Sox).

Schatzeder was a huge bust for the Tigers, compiling a 11-13 record his first season, but then putting up a 6.06 ERA in 1981.  That season would be his last as a regular starter. When he was traded to the Giants for Larry Herndon in 1982, he was put in the bullpen, where he struggled so much, that he only lasted until June.

Bought by the Expos, they figured he could recreate his success there. And they were correct. In 1983, Schatzeder was solid out of the pen and in 1984, he even got to start again, compiling a 2.83 ERA as a starter, and a 2.43 ERA as a reliever.

He would last in Montreal until midway through the 1986 season when he was traded to the Phillies for Tom Foley and Lary Sorensen. Schatzeder played that half season, and then another, with the Phillies before he was sent to the Twins, who won the World Series in 1987. Schatzeder was not effective in the regular season or the Series (his ERA was above 6 in both cases), but he got the win in Game 6 after he took over in the fourth inning for struggling starter Les Straker. The Twins would come back against John Tudor, Ricky Horton, #324 Bob Forsch, and Ken Dayley, winning the game 11-5, and making a winner out of Schatzeder.

Schatzeder bounced between five teams until his retirement in 1991: The Indians, the Twins (again), the Astros, the Mets, and the Royals. The team he was most successful with was, by far, the Expos.

In retirement, Schatzeder returned to the Chicago suburbs and found work as a gym teacher in Aurora. He is also the assistant football coach there. 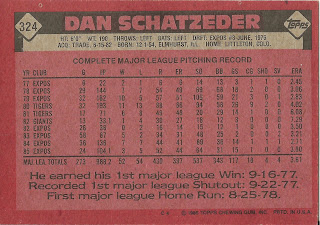 Rear guard: Weird "first" to cite for a reliever: First home run. It was hit off Giants starter "The Count" Montefusco and drove in #212 Chris Speier. Schatzeder earlier hit a single that plated #238 Larry Parrish.
Posted by Jets Break Jaws at 10:34 PM