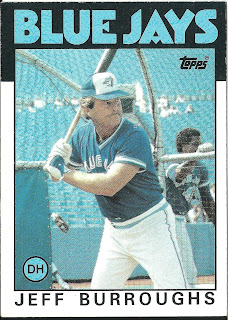 Card thoughts: Burroughs looks old and fat. No surprise, this would be his last Topps card.

The player: Bill James considers Jeff Burroughs to be one of the better outfielders in the 1970s, comparable to the 70s careers of hall of fame outfielder Dave Winfield, and borderline hall of fame candidates Dave Parker, #60 Dwight Evans, and Cesar Cedeno. However, Burroughs really hit a wall in the early 80s, and was never an impact player again.
Burroughs was the overall #1 draft pick in 1969 by the second iteration of the Washington Senators and made his major league debut only a year later. After playing sparsely as a backup outfielder while team was in Washington, he became a star soon after the team moved to Dallas. In 1973, Burroughs’ first season as a regular player, he hit 30 home runs (2nd in the league) and drove in 85. But this was just a taste of his MVP season in 1974. Burroughs led the league with 118 runs batted in and he had a strong .901 OPS. He was also the starting left fielder on the all star team.
Burroughs must have been trying too hard to replicate his 1974 success the next season, as he struck out a league leading 155 times, 23% of the time. All of his numbers went down, which caused his batting average to plunge 70 points from the previous season. He still managed to drive in more than 90 runs, however. After another so-so season in 1976, Burroughs was traded to the Braves for six players. It was a good deal for Atlanta, as Burroughs had another MVP caliber season with the Braves, hitting a career high 41 home runs (2nd in the league) and 114 runs batted in. His average was back up to respectable levels too. By modern metrics, Burroughs’ next season may be considered his best. He led the league in walks and on base percentage and had a robust .961 OPS. But Burroughs power numbers were way down: He hit about half as many home runs as the year before, and he drove in only 77.

This would be a foreshadowing of the remainder of Burroughs career. He never again hit even 20 home runs, and would never again play more than 120 games. Burroughs was traded to the Mariners in 1980, and he spent one season with them as their starting rightfielder before moving on to Oakland. By the time he got to Oakland, Burroughs’ age and poor fielding limited him in the outfield so he started spending more time as a designated hitter. His best season in the 80s was his first year with A’s. Splitting time between designated hitter and the outfield, Burroughs hit 16 home runs and drove in 48, while sporting his highest OPS (.878) since 1978.
Burroughs was almost exclusively a designated hitter his last three seasons, which allowed him to play in 121 games in 1983, once again the most since 1978. Burroughs finished his career with the Blue Jays, where he was the right handed half of a designated/pinch hitting platoon with another veteran 70s masher, Al Oliver. His final major league at bat was his only at bat in Game 7 of the ALCS. In the bottom of the 9th inning with the Blue Jays down big, Burroughs grounded back weakly to the pitcher, an ironic ending for one of the most feared sluggers in the mid 70s.
Burroughs spent his post retirement days coaching little league baseball, including his son Sean who, like his dad, was a #1 draft pick. He also managed Phillies star Chase Utley as a kid. 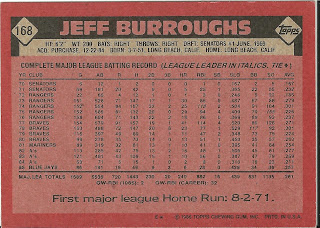 Rear guard: I was always excited to see a team that no longer existed in a player’s statistics. If you squint real hard, you can see the Senators way at the top. Kids today are probably just excited at seeing the Expos on the back of a player’s card.
Burroughs first home run came as he was pinch hitting for second baseman Bernie Allen. It was off Tigers pitcher, and future long time Dodgers pitching coach, Ron Perranoski. The three run blast drove in Larry Biitner and Dick Billings. The Senators used 4 pinch hitters other than Burroughs in the game.
This date in baseball history: Radio broadcast rights are granted to Chicago, Boston, Detroit, and Cincinnati in 1933. WGN was one of the grantees, and still broadcasts Cubs games today.
Posted by Jets Break Jaws at 9:54 PM